Home  ⁄  The Wire  ⁄  [DG NEWS] MEET BUBBA, THE REDNECK WEREWOLF; EVEN THOUGH HE’S NOT A TRUMP SUPPORTER

BUBBA, THE REDNECK WEREWOLF, adapted from the Mitch Hyman comic with a screenplay by Stephen Biro and directed by Brendan Rogers, has been screening exclusively at film festivals and conventions to great acclaim. FAMOUS MONSTERS OF FILMLAND said of the film “…The world could stand a lil’ more fun like the kind offered up here!” The cast includes Fred Lass, who actually trained in character makeup as Bubba, Malone Thomas as Bobbie Jo, and creator Mitch Hyman himself as a devil character. The DVD is slated to be released on October 16th.

According to Mitch Hyman, creator of BUBBA, THE REDNECK WEREWOLF, the Bubba character originated from a Halloween costume. “I figured out how to make myself a wolf man,” Hyman said, “But the hair was so expensive and hard to work with for me at the time. Then I figured out I could get around it by putting on my 1980s trucker ball cap and add a pair of overalls… So the prototype for Bubba was born!” 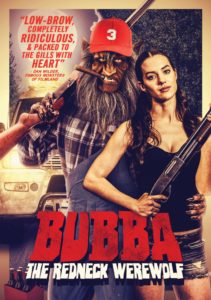 The character was originally published in Brass Ball Comics in 1996, and later by Creature Entertainment, eventually becoming a comic cult classic. Hyman was then approached with the idea of turning Bubba into an animated series. “I thought it would be fun to see how Bubba could me more benign,” Hyman said. “I re-vamped him and took him back to his first origin as a dog catcher, but now he was up against corporate pirates doing animal testing.” The BUBBA, THE REDNECK WEREWOLF animated series never panned out, but this incarnation of Bubba has since become the star of the comedy-horror-sci-fi mash-up B-film, about a ferocious cigar-smoking werewolf who would love to save the day — after several beers and a plate of chicken wings.
Upcoming screenings of the film are scheduled at Dragon Con, on September 2-5 in Atlanta, and at the Sitges Film Festival in Barcelona, on October 7-16th. However, you can own the DVD and see the film which everyone at festivals and conventions is talking about, starting October 16th. Pre-orders are available through Amazon, and directly from the distributor here.