Shout! Factory’s Scream division keeps it going with even more Blu-Ray releases in September, with Frank LaLoggia’s 1988 ghost story LADY IN WHITE set to drop on the 27th. LADY IN WHITE stars Lukas Haas (who would go on to appear in  Daily Grindhouse favorites MARS ATTACKS! and INCEPTION) as a horror writer who finds himself in contact with the ghost of a girl whose murder he partially witnessed when he was a kid. To prevent her murderer from taking the lives of more children in the present, he must work with her to find whoever it is and put a stop to them. LADY IN WHITE was well received during its theatrical run, by reviewers such as Roger Ebert, and despite the grim subject matter, it’s one of the lighter movies to see release by Scream! Factory, favoring suspense and atmosphere over blood and guts, which makes this a good choice for those family movie nights the closer we get to the Halloween season. 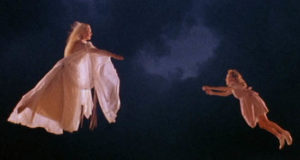 This is actually a pretty exciting release. Despite being a favorite amongst critics and fans who caught it on HBO in the ’80s, the film has been out of print since 2005. That DVD release didn’t even include the directors’ cut that the second VHS release gave viewers. This Blu-Ray release not only gives you that, but a second extended directors’ cut, along with an introduction by the director, a commentary track, and roughly a half-hours’ worth of behind-the-scenes footage, among other things, such as radio and television spots. 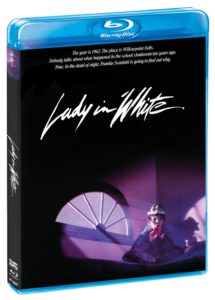