FROM SUICIDE GIRLS TO THE GRINDHOUSE

Video Express was the store that set Director Mike Pencci on the path to becoming a filmmaker. It was a small shop with your local outcast running the register, watching an obscure title that you had never seen. Mike Pencci walked straight for the horror films, browsing the box covers with exaggerated cover art, promises of gore and dismemberment, whether it delivered it or not Pencci wanted in. When he wasn’t rocking horror, he was staying up late with his mom who would bust out some vintage Steve McQueen in THE GETAWAY or Bruce Willis in DIE HARD. Mom was just that cool, and Mike was just that interested. Today that interest is paying off in spades.

If that counter geek could see Mike today, he would either give him an approving fist bump, or run the other way if he saw the kind of ideas this cat gets with chainsaws. Point is, Mike Pecci is a badass motherfucker who has just made some outstanding grindhouse short films that are available for the first time in one compilation. We aren’t talking some exploitation lite, we are talking balls to the wall,-chainsaw wielding-oiled up babes out to get bloody-out to settle scores-out to make sure you have a damn good time exploitation. Pecci knows his shit and we were really impressed with his story of bringing these films out so we thought what the hell, let’s make him our next FEATURED FILMMAKER.

Before we get to the yakety, click this link to buy the DVD in one of 3 exclusive covers:

DG: Thanks for hanging with us while we bombard you with questions for the next 30 minutes.

MP: My pleasure, happy to do it.

DG: So give us the quick wrap on your new DVD:

MP: My shorts are loaded with hard violence, un-edited sexuality, and brutal women.  But most importantly they were made with a sense of humor.  All the ingredients to give you entertainment that you would sit down and watch with a 12 pack of PBR and a group of friends. When I set out to make these films, it was really to take advantage of a situation I found myself in.  I was really just practicing new photography techniques, and filmmaking skills that I would then implement into my music video work, and serious film work.  Turns out that people wanted to see it!

DG: What was the first film you saw that changed your life or had a significant impact on you?

All of Carpenters films really, THE THING, ESCAPE FROM NEW YORK, but I also really dig Peckinpah. Their films all have a certain style, a certain look and feel, I call it a “smell”. Some directors have this ability to create a world, an atmosphere that is very unique and you know it belongs to them as soon as you see it.  It’s more than just a visual style, it’s the combination of all their techniques that give it a “smell”.  When you watch it you can almost taste it.  Carpenter, Fincher, Bay, Speilberg, Michael Mann.  They all have it.

DG: Who are the directors out there right now that you dig?

MP: Well, they’re the guys that don’t really need plugging cause they’re doing so well. But, I am a huge Robert Rodriguez fan because I like his business model which I have borrowed. I like Tarantino cause he’s fucking Tarantino. Carpenter and Peckinpah are big for me, but I love to watch Fincher, Ridley Scott, Micheal Mann, and Michael Bay for camera work. I don’t know, I go through these points of obsession, right now I am obsessed with Nicolas Refn right now, that trailer for DRIVE looks fucking amazing. I just watched BRONSON and was blown away by that, he really has that slow build down.

DG: Are you a guy that kind of follows a director wherever he goes or are you more of a genre purist who likes to stay put in one style of film?

MP: That’s interesting; I have two classifications of movie going friends. I have the film snobs and I have the regular average Joe and I tend to go between both categories. I have my moods when I am kind of a prick because there are certain things I want from this movie and this guy is an asshole for not doing it right. Then we have our days when I went to see TRANSFORMERS 3 cause I wanted a big fat cheeseburger and French fries. So I try to watch everything and different genres. I get enjoyment from a lot of different places cause I am also a cinematographer so I get a boner for awesome lighting and that kind of stuff.

DG: TRANSFORMERS 3 actually is just like a glossy monster movie, that annihilation of Chicago which goes on for like 40 minutes is a fucking Godzilla film. 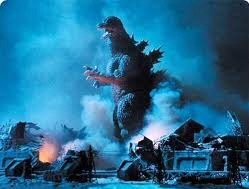 MP: I probably should have said this, I started getting into movies when I was younger because my dad would show me all these Godzilla films and I love the hell outta those. I am a huge Godzilla nut, the ones form 1970’s, the ones from 1980’s, so yeah there are parts of that where I am watching a Godzilla movie.

DG: What was that first moment when you thought you were going to make it as a filmmaker, or have you had that moment yet?

MP: I’ve been working in the business now for ten years; I have been a short film director for about that long. I’ve done commercial work and recently in the past five years we’ve done a lot of really good music video work. We recently, me and my co-director Ian McFarland, were just signed to an agent for music video work so that was an interesting moment. When we first started getting representation and we got a phone call for Ozzy Osbourne’s staff for a treatment for one of his videos cause they had seen our work I was like, okay cool, I guess we’re legitimate.

The same thing happens with the film stuff. You make a film and it goes out to the festivals and people tell you how much they like it or go online and buy it like my COLD HARD CASH DVD. I was selling that to people in Germany and France, all over the world. It was this little thing we made in three days for no money and everyone seems to like it. So, it comes in these stages. I’ve learned to spread myself too thin, I am either doing film stuff, music stuff, or photography stuff cause these days it’s the only way to survive.

DG: So out of the films on the new DVD, do you have a favorite?

MP: COLD HARD CASH is probably the most fun and it’s one that is the oldest so I can watch it with some distance between it. Odette Suicide played Dean one of the leads, we wanted to do a strong Steve McQueen character within our budget. Since then it’s kind of been my mantra that I want to develop strong female characters, like I want the female John McClane. With some exceptions I like to create female characters that make you think like when we were kids “oh man I want to be John McClane or oh man I want to be Snake Plissken” and there’s some of that in COLD HARD CASH so I enjoy that.

STRAY BULLET I enjoy for the photography. That was a film that was made when we where shooting a photo set for Suicide Girls and this was right when they started coming out with the digital cameras, the DSLRs. I thought fuck it, they shoot video at the same time, why I don’t I do this photo-video-grindhouse type thing.

DG: Are any of these shorts going to full length feature films?
MP: (David… not that one) Lynch, the guy who wrote COLD HARD CASH with me, has been begging me to do a feature about the two hit-men in that movie. He doesn’t want it to be a grindhouse type but more of THE GETAWAY type so I said write it dude. We just finished writing a feature, that I can’t talk about, and then we have some really awesome producers on board with us. So our goal is to do the feature we cant talk about, then do a horror franchise.
DG: Your mom is playing a pretty big role on the DVD’s. Not many people toss their mom on a commentary track but you went full tilt and did it.
MP: A friend of mine had suggested it to me because he had worked with my mom, so I said fuck it lets try it and she just tore into me. The whole time she was like “dialogue is terrible, this is terrible” so the DVD is worth it just for that. It’s always nice to hear a directors mom knock him off his pedestal. This is something I am going to do from now on I think.

DG: What do fans need to know about picking this DVD up?

MP: Yeah the DVD has all three shorts on it. I didn’t want to sell a DVD with just short films, so the DVD is loaded with easter eggs and a lot of it is hysterical. We have three separate covers and If you join our referral program and get 2 people to use your name when they buy the disc, you have the option of upgrading to a special variant cover which I haven’t released yet but there is only going to be like 50 of them. It’s more expensive on my end but fuck it, we’re at the point where shit can be downloaded for free so if you’re blowing $20 on something, make sure it’s something that could be worth something.

DG: That’s our time Pecci, thanks for hanging with Daily Grindhouse, hopefully we can toss some new fans your way.

MP: Thanks a lot man, I really appreciate it.

Please visit Pecci’s website at: http://www.mikepecci.com to purchase his new DVD. You are going to be hearing a lot from this cat, trust me, so get in on the ground floor so you can say you’ve been snatching up his work since his first collection of shorts. Featured Filmmaker number 2 is in the books, next week chapter 3.