I just wanted to be different.

My Momma, Kimberly Peirce, is a good woman, deep down inside.  She means well, even if I think she may be relying so much on the good book for guidance.  Yesterday, I even called her on it.  I said, “Momma, that’s not even a copy of Stephen King’s Carrie!  That’s a copy of Double De Palma: A Film Study, a book about the making of BODY DOUBLE!”  But she didn’t care, she just want on about how we needed to make me based on its image. 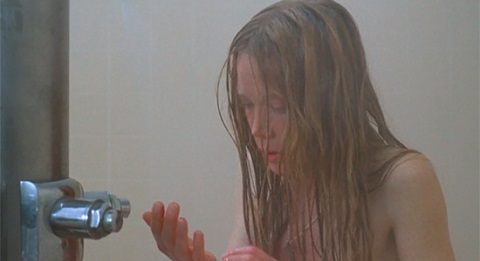 It was how I learned for years, and it was how I knew how to be.  I told her I wanted to be my own movie, but “AND AUDIENCES ARE WEAK,” was all she said, over and over.  She said nobody wanted to see what made me special, they only wanted to see something familiar.  Maybe she’s right, I mean, people know what they love, right?  Why be something special?

But I wanted to be different, especially after I got a look at the other girls.

There were other Carries as well, like the one who was on TV and the one where the kid from “Home Improvement” died, but the first Carrie was the one I was supposed to be.  And I tried to be like the other Carries, oh, how I tried!  I rehearsed plot points.  I memorized Carrie’s looks, the way she talked, even the way she moved so effortlessly.  The only major thing I changed was that I got cell phones, because you can’t exist without one these days.  (Just ask my friend WHEN A STRANGER CALLS.  Well, maybe don’t bother her, as nobody’s talked to her for years and she’s gotten a little weird.)

But I wanted to show my true powers.  I couldn’t help making some changes, like having Julianne Moore’s Margaret White be a much more subtle character than Piper Laurie’s, but who can blame me?  You can’t out-crazy Piper Laurie!

I wish I could say I made changes with good intentions, but really, I was just acting out against Momma.  Momma wanted me to blend in.  She wanted me to be the Carrie she knew, and the Carrie she knew the audience would love.  A good girl, filled with images and moments that are so iconic that they’re memorable even to people who aren’t aware of the first Carrie’s beauty.

I think that’s what messed me up a little bit.  I wanted to be me, but Momma had other ideas.  I keep going back to the words she repeated when I told her that I wanted to change, to be my own Carrie.  “They’re all gonna laugh at you,” she said.  “No, Momma,” I countered, “They’re just going to be ambivalent towards me.”

I think I was right.  When I finally had my big night out, people were nice, but I kept having the feeling that I wasn’t being true to myself.  I could almost see them thinking, “She’s okay, but she’s not the real Carrie.”  Like they couldn’t help but to compare me to the Carries that came before, because I wasn’t special enough to warrant my own consideration.

But I’ll show them.  A $16 million opening weekend may not seem like much, but I’m part of a franchise.  Everyone involved with me, even the kid who yells “creepy Carrie” through a car window (instead of NOT through a car window, which is COMPLETELY DIFFERENT even if he gets psychically thrown off his bike just the same), is guaranteed to be linked to a well-known horror film for the rest of their lives, even if the only acting they do after this is at regional auto shows and as a walk-on character in episodes of “The Client List.”  In fifteen years, I’ll be rediscovered by cinephiles, called “an underrated remake” by genre journalists with too much time on their hands, and they’ll all be able to do horror conventions and charge $20 for autographs.

I mean, Christ, I saw Lar Park Lincoln autographing pictures of HOUSE II last year.  Lar Park Lincoln!  The woman who just ripped off my predecessor when she had to fight Jason Voorhees!