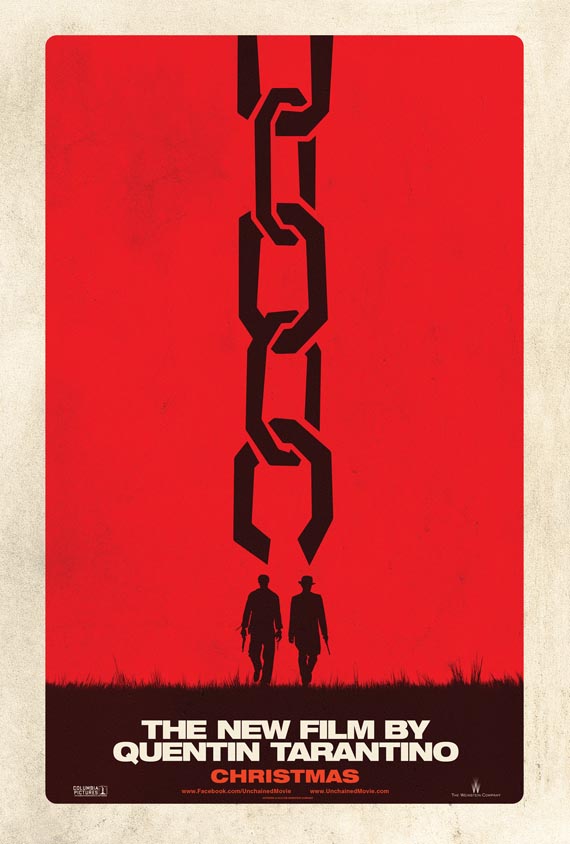 I avoid Tarantino scripts like the fucking plague. I want my eyeballs kicked in with awesome each time I sit down in the seat. His films provide a consistently unique experience every single time. Today we have the official synopsis of the film courtesy of the PR crew which is now in full swing. I almost did a blind post but after hearing from a buddy that this was free of spoilers, I took a look. Tarantino has a lot of films left to make but this has the feel of perfection and it could well be his masterpiece. I hate writing shit like that, it sounds like pompous bloviating but just read this outline; you pair QT with a story like this and you have nothing but gold, kid!

Set in the South two years before the Civil War, DJANGO UNCHAINED stars Academy Award®-winner Jamie Foxx as Django, a slave whose brutal history with his former owners lands him face-to-face with German-born bounty hunter Dr. King Schultz (Academy Award®-winner Christoph Waltz). Schultz is on the trail of the murderous Brittle brothers, and only Django can lead him to his bounty. The unorthodox Schultz acquires Django with a promise to free him upon the capture of the Brittles – dead or alive.

Success leads Schultz to free Django, though the two men choose not to go their separate ways. Instead, Schultz seeks out the South’s most wanted criminals with Django by his side. Honing vital hunting skills, Django remains focused on one goal: finding and rescuing Broomhilda (Kerry Washington), the wife he lost to the slave trade long ago.

Django andSchultz’s search ultimately leads them to Calvin Candie (Academy Award®-nominee Leonardo DiCaprio), the proprietor of “Candyland,” an infamous plantation where slaves are groomed by trainer Ace Woody (Kurt Russell) to battle each other for sport. Exploring the compound under false pretenses, Django and Schultz arouse the suspicion of Stephen (Academy Award®-nominee Samuel L. Jackson), Candie’s trusted house slave. Their moves are marked, and a treacherous organization closes in on them. If Django and Schultz are to escape with Broomhilda, they must choose between independence and solidarity, between sacrifice and survival…

Written and directed by Academy Award®-winner Quentin Tarantino, DJANGO UNCHAINED is produced by Stacey Sher, Reginald Hudlin and Pilar Savone. The executive producers are Harvey and Bob Weinstein, Michael Shamberg, Shannon McIntosh, and James Skotchdopole. DJANGO UNCHAINED will be released in the U.S. on December 25, 2012, and internationally by Sony Pictures.

This is only the second time Lawrence Bender and QT haven’t worked together on a feature film (the first being DEATH PROOF but that may have had something to do with the nature of the project). I am not a fan of DEATH PROOF as a whole so that is the only red flag I see on this good shit. Anxious to catch the trailer which should be soon.