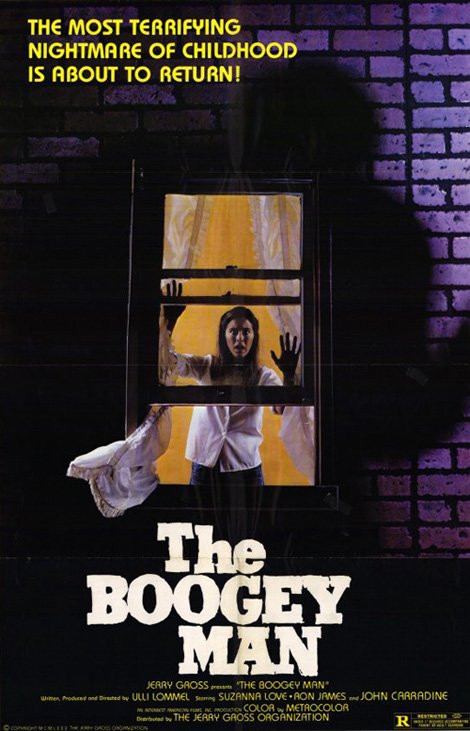 Other Titles: THE BOGEYMAN, THE BOGEY MAN, SPECTRE

Scissors to the throat

Screwdriver through the throat

Pitchfork to the belly

Fans of the FINAL DESTINATION franchise are already accustomed to the concept of an incorporeal entity wreaking havoc on anyone unfortunate enough to gaze upon it (in FINAL DESTINATION’s case, the gaze is an ominous second sight). The notion holds origins in mythology and is widely used in horror. Just as popular but often confused with the disembodied spirit (which was always part of the spirit realm) is the discarnate entity, which once held an earthly body before death. From the Latin for “without flesh”, the discarnate entity often uses earthly objects as channels through which it conducts its malevolence; such is the case in German director Ulli Lommel’s 1980 slasher, THE BOOGEYMAN, in which a condensed evil spirit uses a mirror as a conduit to wreak havoc on a rural American family.

Set to Tim Krog’s ethereal synth-heavy Carpenter-esque score, the film begins with a slow pan around a single-family home that looks straight out of Haddonfield.  A mystery POV shot looks upon a woman in the embrace of a silent, stone-faced man. The scene gets kinky as he dons her stocking on his head, but their rendezvous is interrupted when the woman realizes that her two kids, Lacey and Willy, are watching them through a window. At the mother’s behest, the man ties Willy to a bed in the children’s room and leaves. Little Lacey grabs a butcher knife from the kitchen to cut her brother free, and Willy then takes the knife and tiptoes into the master bedroom, where his mother is snuggling in bed with the silent lover. Willy can’t handle that, so he stabs his mother’s boyfriend to death as she screams. 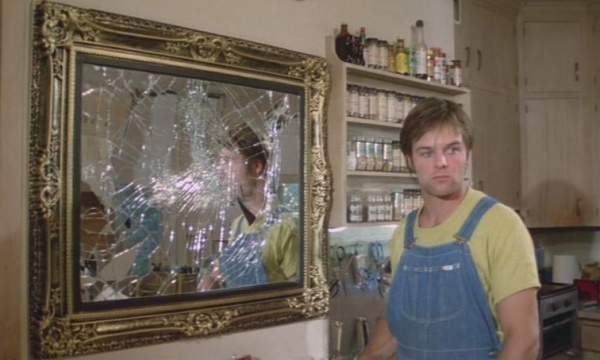 A few decades later, Willy (Nicholas Love) and Lacey (played by Suzanna Love, who was married to Lommel at the time) are living on a New England farmhouse not unlike the foreboding family dwelling of THE AMITYVILLE HORROR. Willy is mute, traumatized by the events of his childhood. Lacey is a young wife and mom, plagued by visions of her mother’s lingerie-faced lover. Her therapist (John Carradine sighting!) advises her to confront her demons by returning to her childhood home where the trauma occurred. To her horror, the man’s stony face appears in her large bedroom mirror. Lacey immediately shatters the mirror, but her husband is a horror movie husband, and horror movie husbands are notoriously dismissive of their wives’ fears and assertions of evil. In a classic horror movie husband move, he pats her pretty little head and repairs the mirror to prove that there’s nothing to worry about. Lacey’s spiritual vulnerability leaves her open to provocations from her own personal Bogeyman, and when she breaks the mirror she ends up setting the discarnate entity free. Here’s where THE BOOGEYMAN gets interesting; any contact with the mirror, in whole or in part, invites the entity to possess the body of whomever touches so much as a single sliver of glass from it. As shards of the mirror turn up, so do dead bodies.

THE BOOGEYMAN, while occasionally faulty, is based on a premise that sets it apart in the slasher subgenre. Disjointed editing makes for clumsy cadence at times, but the compelling story and fever-dream-like atmosphere make up for the odd pacing. Its hazy, spectral quality unifies the film along with a cohesive plot that doesn’t rely on those components borrowed from horror hits of the past so much as it utilizes them right where they respectively fit. As a supernaturally-charged story about a household objecct, THE BOOGEYMAN would make a solid double feature pairing with the more recent haunted mirror tale, OCULUS (2014). 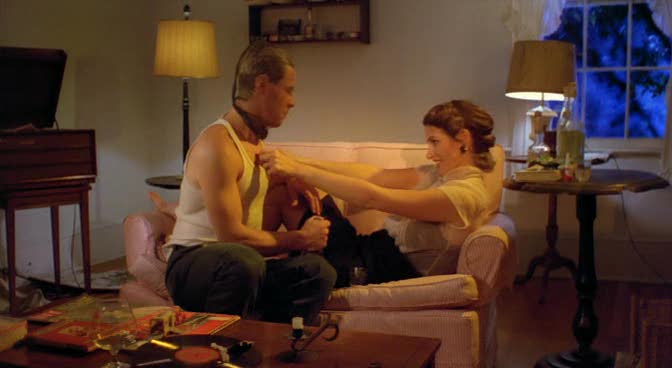 Most of THE BOOGEYMAN’s boldness lies in its up-close-and-personal shots of penetration during the death scenes, particularly in a bathroom suicide (”suicide” being used loosely here). Tricks of the editing trade allow for the audience to see the actor’s face before, during, and after the moment of penetration, with buckets of blood for maximum viewer satisfaction. Craig Harris (TOXIC ZOMBIES, 1980) gets credit for the hokey but entertaining kissing couple shish-kabob scene, which Lommel enjoyed so much that he brought the special effects artist back for REVENGE OF THE BOOGEYMAN 3 years later. The movie’s climax offers a bombastic confrontation between good and evil that culminates in a glistening, bloody orgy of sharp phallic implements and unholy possession, all the things that would make your average One Million Moms zealot quake with fury, even today. 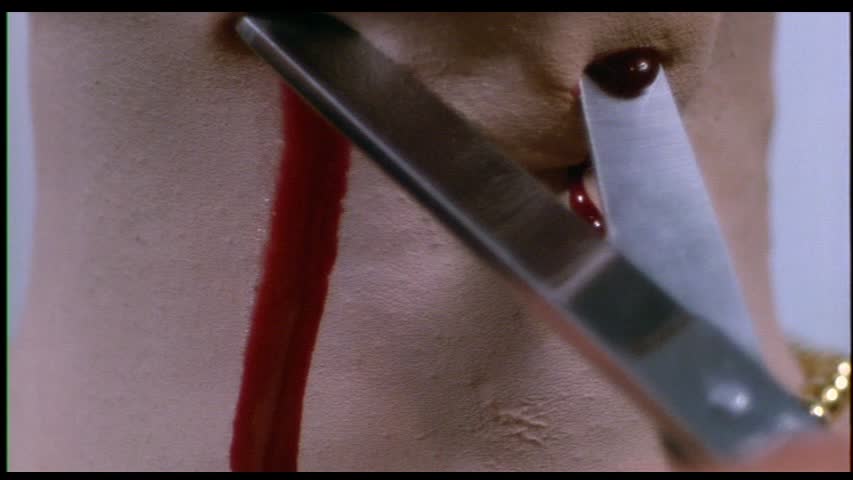 THE BOOGEYMAN was passed uncut for theatrical release in 1980, and was promoted by early exploitation distributor and producer Jerry Gross, sporting the tagline, “The most terrifying nightmare of childhood is about to return!” The Jerry Gross Organization also promoted I SPIT ON YOUR GRAVE (1978), Fulci’s ZOMBIE (1979), and BLOOD BEACH (1980), among other infamous grindhouse fare. The film was subsequently released on VHS by Wizard Video, but the powers that be took one look at the boobs and blood and carved out a snug spot for it on the DPP’s Video Nasties list in 1984. In 1992, the BBFC allowed for video release with 44 seconds cut, but Vipco made up for the censorship with a gruesome VHS cover luring in potential viewers with the image of a bloodied priest defensively clutching a cross. An uncut version was certified for UK release in 2001. THE BOOGEYMAN wasn’t exactly notorious, but the movie does hold the distinction of being one of the few films whose sequel, REVENGE OF THE BOOGEYMAN (1983), made the Video Nasties list as well. 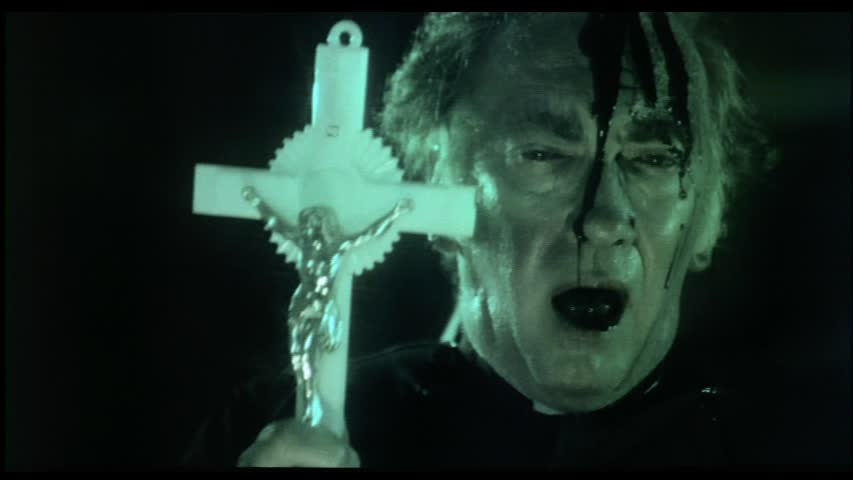 The film itself is one that fell through the cracks in its time, and has since been largely dismissed by critics who couldn’t engage beyond the HALLOWEEN-ish opening scene. It’s a film that entertains with each repeat viewing, and it wouldn’t be surprising if the film found a larger cult following with Diabolik DVD’s recent 88 Films Blu-Ray release. Krog’s eerie score has aged as well as any synth/trax soundtrack from the late 70s, which is to say that it’s a delight for genre fans. The opening titles in particular are reminiscent of the now-classic “Tubular Bells” music from THE EXORCIST, but still have a distinct identity that fits with the tone of the film. Krog’s work here is definitely underappreciated and deserves a tip of the hat and a place alongside the music of Goblin or Philip Glass in horror soundtrack immortality.

THE BOOGEYMAN is a pleasant surprise for the grindhouse fan. The derivative elements in technique, music, setting that many would pan are simply whimsical additions to a fun story. Simply put; anyone who calls THE BOOGEYMAN “a HALLOWEEN/EXORCIST/AMITYVILLE HORROR ripoff” is critically lazy and failed to discern between homage and mimicry. If you’re a horror enthusiast, it’s worth a watch. 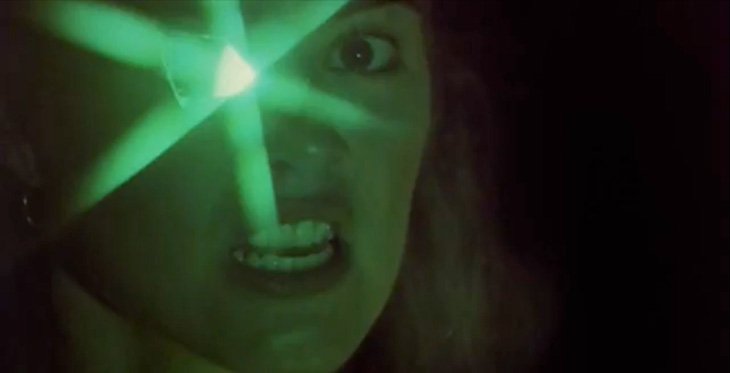