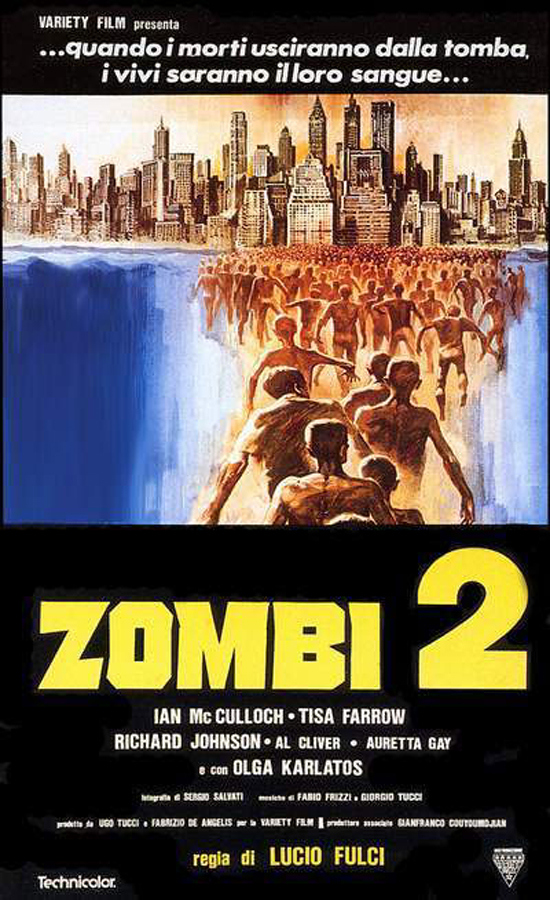 When my friends and I turn our debates to the more philosophical questions in life, the conversation usually goes directly to questions like this one:  “Who do you think would win in a fight: A grizzly bear, or a great white shark?” 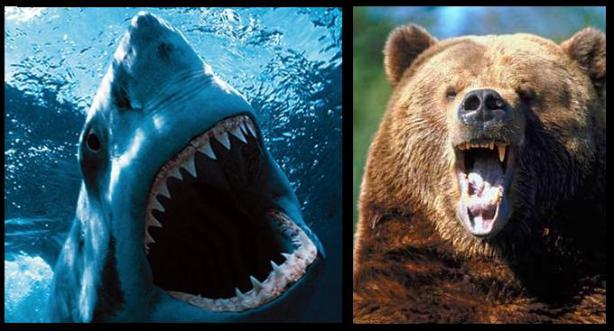 We figure that the battle would take place in an enclosed space, in shallow waters, where there’d be enough depth for the bear to stand and the shark to swim.  My own argument tends to emphasize the underrated fearsomeness of bears — bears catch fish, it’s what they do — but see, I’m already getting off topic.

As the resident film-obsessive, I’ve been inevitably asked the question, “Has there ever been a movie where zombies attacked a great white shark?” It’s a great idea – mindless undead eating machines taking on the world’s oldest and most perfect toothy eater from the sea.

Well, to my knowledge, there’s never been that exactly. That’s the bad news.

The good news: There has, in fact, been a movie where a zombie fought a tiger shark.

It happened in a movie directed by Lucio Fulci, Italian extreme-horror icon of the 1970s and 1980s, known as ZOMBI 2. (Also known, somewhat amazingly, as ZOMBIE. Sometimes it’s a sequel, sometimes it’s not. Oh, and also it’s been referred to by the names ZOMBIE FLESH EATERS, ISLAND OF THE FLESH EATERS, or ISLAND OF THE LIVING DEAD – Italian horror movies go by a lot of names.)

To tell the truth, I can’t rightly recommend a beginning-to-end screening of the movie. Here’s what it does have to recommend it: Some interesting, grisly zombie make-up, a legendarily-gross scene of eyeball damage, a cool shot of zombies ambling across the Brooklyn Bridge, and a great, unbeatably eerie title theme by composer Fabio Frizzi. Besides that, crucify me if you dare, but I don’t think ZOMBI 2 is all that good.  There’s a major disconnect between what the movie’s fans seem to want it to be and what it actually is.  It happens a lot with Fulci, sorry to say.

Also, as you’re about to see, the marquee fight is not as stellar as you’ve been dreaming about. The shark’s teeth have clearly been removed entirely (where was the ASPCA on this?) and the zombie just kind of grabs onto the shark and hugs at him, at one point bloodily chomping on what’s supposed to be a fistful of sharkhide, but so obviously isn’t.

So sadly, it’s not much of a fight. But for fans of interspecies underwater ballet, you’ve hit paydirt!  This scene is slow, weird, almost dreamy – certainly worth watching if you’re so inclined. Here goes:

So my argument is that there’s still room in cinema for this scene to be topped. Some freak somewhere is thinking up the ultimate shark/zombie battle. Guaranteed. As for this freak right here, I’ve kind of shifted my attention to the idea of a polar bear fighting a ninja.