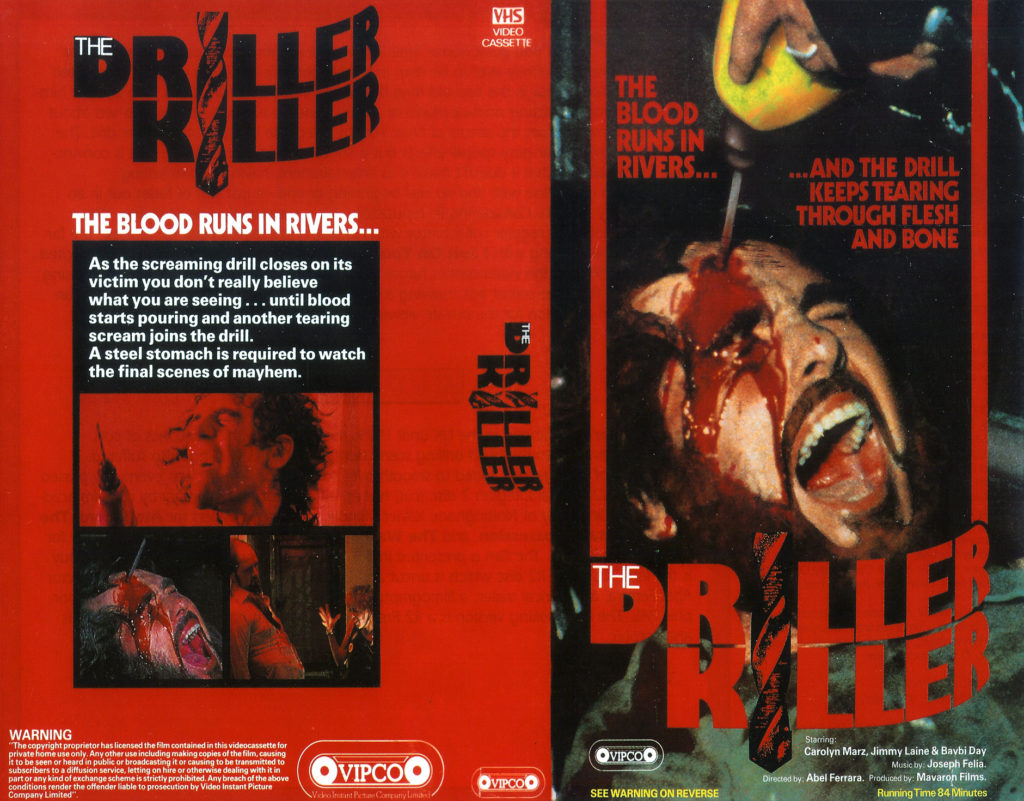 The term “economic anxiety” is bandied about too much these days. It’s given red state voters a free pass on enabling the worst elements of our national makeup. Editors desperate for clicks assign their writers to find any reason other than bigotry for our current political landscape, and the wheel, once spun, always seems to land on “economic no-other-problems-to-see-here anxiety”. As it turns out, director Abel Ferrara had already illustrated the brutal butterfly effect that occurs when economic anxiety is left untreated, way back in 1979, with THE DRILLER KILLER.

If you’ve seen BAD LIEUTENANT (1992) or MS. 45 (1981), you’re already familiar with Abel’s raw, textured style. THE DRILLER KILLER tells the story of Reno Miller (played by Abel Ferrara himself), a struggling artist living in New York City. He struggles so hard that his live-in girlfriend Carol (Carolyn Marz) constantly has to cover his rent when he fails to sell his paintings. Also living with the couple is Carol’s lover, Pamela (Baybi Day). Lest you think they’re angels, the women have no scruples about running up the phone bill with long-distance phone calls, while fully aware that Reno can’t make ends meet as it is. He faces constant negativity over his work from the women and from his manager, Dalton Briggs (Harry Schultz II). The only thing that keeps the starving artist going is his current work-in-progress, which he considers to be a masterpiece. All he needs is a calm space to finish his work, which is immediately denied when an avant-garde No Wave rock band rents the apartment space below Reno’s and uses it to hone their free-form sound, man. As Reno’s hopes for financial salvation and critical praise rise, so does the pressure of performing, and surviving. Once he reaches his breaking point, he takes out his frustrations on the riff-raff littering the streets of New York City. I’ll give you one guess as to his weapon of choice.

I went in on this expecting standard Grindhouse tripe, but got some real nitty-gritty introspection. The oft-used description “art-house meets grindhouse” is a surprisingly apt one for THE DRILLER KILLER. The film’s tone and its commentary on the failure of the American Dream simmers up the feel of a recalibrated TAXI DRIVER. Reno’s aggravations with life in the big city are given due time for exploration, and provide more madness to his methods than is commonly seen in horror films of this tier, before the bodies start dropping.

The editing is erratic at times, using the story’s narrative intercut with unused footage from Ferrara’s previous failed documentary on transient winos of New York, further cut with extended detours with the underground punk scene of the late ’70s. It’s not clear whether or not this was an intentional aesthetic choice to subvert structural expectations of narrative (this is the guy who made BAD LIEUTENANT, after all). In any case, the disjointed editing and copious amounts of blood suggest that we’re not looking at a reliable narrative. It’s entirely possible that Reno’s unhinged psyche acts as a sieve through which his reality passes, taking in transgressions committed against him and fantasizing about his own reaction to those perceived slights. Unfortunately, Ferrara’s commentary on the Arrow DVD release sheds no light on this, and that’s the best part of THE DRILLER KILLER: you can take it as you please. On the surface it is exactly what the title promises, but grindhouse cineastes may find their own low-budget Travis Bickle in Reno Miller.

As late as 2007, a remake was in the works, titled DRILLER KILLER REDUX. Screen Anarchy reported that the film would depart from the exploitation feel of the original, and focus more on the psychological thrills as it’s title character, now living in London, slowly slipped into madness. But according to a Starburst Magazine interview, Ferrara knew nothing about it, though he was open to the idea of bringing Reno back for a sequel. 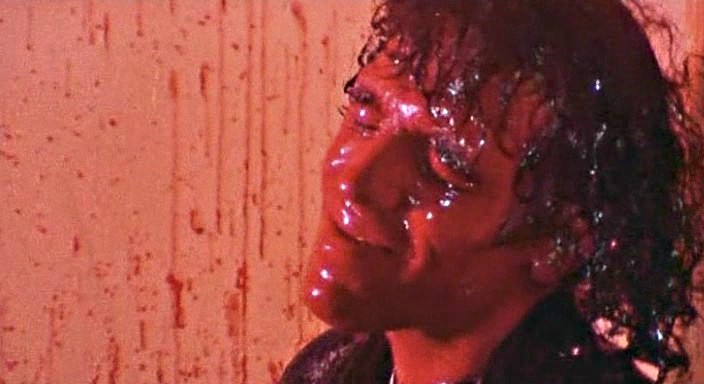 Despite its infamous involvement with the video nasties crusades, THE DRILLER KILLER is no more gory than the standard giallo film. There’s onscreen penetration, with an abundance of bright blood emanating from a single entry point. In 1979, however, the drilling spree was a savage jolt to American audiences. Ferrara’s seamless transitions from fantasy to reality and back again made discerning real murders from imagined ones impossible, and thus scenes like the one depicting Reno gleefully soaking in a shower of drill-induced blood become all-the-more shocking, and all-the-more deserving of its Video Nasty status. 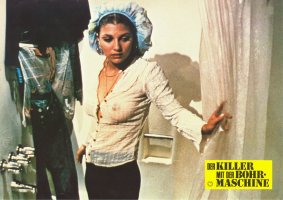 THE DRILLER KILLER enjoys some notoriety on the Video Nasties list, up there with CANNIBAL HOLOCAUST and THE EVIL DEAD. Despite its graphic violence and scenes of Bohemian debauchery, THE DRILLER KILLER earned a spot on the Video Nasties list purely because of it’s VHS cover depicting a bloodied man in mid-scream, as a spinning drill bit bores into his forehead. Three years after an uneventful 1979 American release, UK distributors VipCo took out full-page cinema magazine ads for THE DRILLER KILLER in a number of movie magazines, with the cover art and the ominous tagline, “There are those who kill violently.”

According to Ferrara’s biographer Nick Johnstone, in his 1999 book Abel Ferrara: The King of New York, most authorities leading the crusade against such films didn’t even watch the movie itself, but the cover was so offensive and brutal that the film was added to the Video Nasties list of banned films one year after its UK release. THE DRILLER KILLER was held up as a horrifying example of how depraved and insidious “films of that sort” could be, and that’s as sensational as it gets. 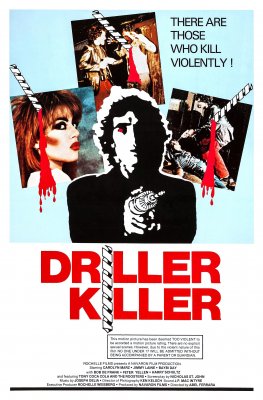