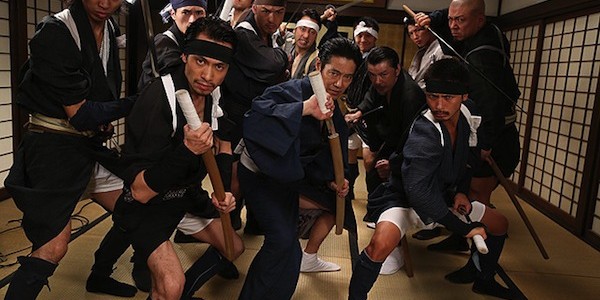 So, here’s the thing. Lists are bullshit. THIS list is bullshit. In a week, half of these films could switch places. In a year (when I’ve actually caught up on the films of 2013), the entire list might be different. So take this solely as ten films that I’ve seen over the past year that I would happily recommend to you.

2013 was a pretty darn good cinematic year by any reasonable standards. I spent most of my time in the glorious muck of microbudget films, but I occasionally found my way to the theater (or Netflix) to watch more traditionally respectable fare. There are some common themes you might find on this list: films about films, lengthy run-times, the embrace and rejection of maturity, excessive violence, nudity and/or silliness; but there are another ten films that could easily have made this list that involve none of those things.

So, with that nonsense out of the way.. Here are ten from 2013 that you have to see.

I never quite grasped the cult appeal of Paul Verhoeven’s 1995 uber-flop (though eventual financial success) SHOWGIRLS. Watching some very talented people implode so spectacularly just holds little interest to me, so I’m as surprised as you are that a (mostly) shot-on-video, 2 1/2 hour sequel starring, written and directed by supporting player Rena Riffel would end up on my year-end list.

The reason I’m drawn to microbudget cinema is the potential freedom for creators to transcend their limitations and create something truly original, and Riffel holds absolutely nothing back in this salvo of excess and debauchery. It’s self-indulgent, insane, and often entirely incomprehensible, but it also shows a passion and willingness to experiment that puts most no-budget cinema to shame. To some, it would be unwatchable.. but for me it was one of the most engaging, baffling and wonderful experiences I’ve had with a film this year.

Oh, and it’s technically a 2011 film. See what I mean about lists being bullshit?

I recall sitting in the theater for Edgar Wright’s HOT FUZZ with my expectations set sky high. I sat in silence for the duration, and found myself thoroughly disappointed by the experience. It was only upon repeated viewings that my adoration for that film increased to the point where I may even rank it higher than SHAUN OF THE DEAD. So, it was with some trepidation that I sat down to watch THE WORLD’S END. Could really ANY film live up to the expectations built by the previous two films? Would I be able to properly appreciate it on a first viewing?

I needn’t have worried. THE WORLD’S END is phenomenal, and two subsequent viewings have dulled little of the pleasures of its plot – which mixes elements of body-snatcher style science fiction with a surprisingly morose ode to embracing (and shedding) adult responsibilities. The ensemble is incredible, but Simon Pegg continues to prove himself adept at both startlingly dramatic moments and broad physical comedy. A wonderful ending to one of the most thoroughly enjoyable thematic trilogies that cinema has ever produced.

Have I even mentioned how much I despise referring to the 2000s as “the aughts”? Well, if I had to choose my favorite film of (*sigh*) “the aughts”, I might very well choose Alfonso Cuarón dystopic masterpiece CHILDREN OF MEN. It’s been more than six years since Cuarón had made a proper feature film, so one can be expected to wonder what the heck he was doing with his time.. The answer – of course – was creating a film unlike any ever seen. A true “ride” that pushes a mix of digital effects, sound and performance well beyond anything seen.

Moments of extreme, breathtaking beauty mix with the sheer terror of drifting endlessly into the void of space, and while I had some issues with some of the story elements, it’s really a minor quibble in the grander scheme of the spectacle of the film as a whole. This is bravura filmmaking, and one can only wonder what boundaries Cuarón is going to attempt to stretch – or break – next.

And we go from the cutting edge of cinema to a film that celebrates the propagandic power of videotape. My knowledge of the 1988 Chilean referendum which led to the dissolution of the Pinochet regime was certainly less than exhaustive going into Pablo Larraín’s breathtaking NO, but the film is as much about the surprising power of advertising, as well as the way that political differences can create strange bedfellows (and powerful enemies). Led by a restrained performance from Gael García Bernal, the film traces a war between advertising executives with flashes of surprising humor, but with a sheen of darkness and consequence hanging over the proceedings. With similar wars playing out daily on television screens, it’s fascinating – and distressing – to see some of the tactics in their infancy.

It’s best to not give away all the secrets of Sarah Polley’s startling biographical documentary. By now, savvy film fans know that former-child actress Polley (who in Canada is *still* probably best known for her work on CBC’s ROAD TO AVONLEA) is the real deal, and has continually made brave and interesting choices as both an actor and director. But one can still be excused for being wary of a documentary – directed by Polley – which looks to trace the romantic history of her parents, and the choices and difficulties that surrounded her own birth. Such subject matter could easily become self-indulgent, and the final result has the potential to go right up its own ass.

However, there’s much more to this story than meets the eye. I found myself overwhelmed as certain things were uncovered, and as things became almost uncomfortably intimate. There’s a beautiful rawness to the proceedings, and by the end you feel like a part of this odd, complicated – but ultimately loving – family. And then it ends with the best stinger of any film released this year. Beautiful stuff.

I should have hated FRANCES HA. Watching a bunch of privileged twenty-somethings complaining about how difficult their lives are sounds like my worst nightmare, and even with the general acclaim the film had received, there was a part of me that was dreading watching it.

So, of course I adored it. Of course I related to it. Of course I found it beautiful, and affecting and immediately found myself wanting to dig up every previous Greta Gerwig performance to see how I could have missed out on such an amazing actress. The search for maturity and the bonds of friendship are major themes in some of my favorite movies, but few are as beautifully nuanced and perfectly paced as this. Really incredible; and remind me never to doubt Noah Baumbach in the future.

Hey! Wasn’t this a TV movie? Well.. yeah! Who cares?! And it played theatrically in Europe, so THERE. It also plays as the perfect (temporary?) send-off for Steven Soderbergh’s always surprising directorial career. I waver a little on some of Soderbergh’s most-beloved work, but I can’t help but adore a director who was so willing to take chances, and to delve into genres and subject matter that you can see he feels passionately about. Here, the later life of Liberace becomes a canvas for Soderbergh to explore fame, celebrity, obsession and legacy, and does so with just the right amount of opulence and kitsch. Performances are absolutely incredible – including a memorably terrifying Rob Lowe as Liberace’s plastic surgeon. The final scene is a perfect capper.. both for the over-the-top life of Liberace, and for Soderbergh as a director. 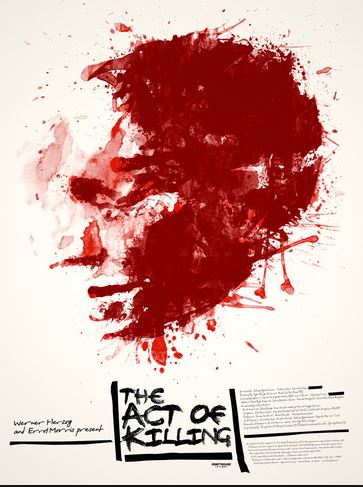 3. THE ACT OF KILLING

More than half a million people were exterminated during the 1965 Indonesian anti-communist purge. Those responsible for these killings still regain power today, while the gangsters who carried out the murders speak of the time with good humor and reverence, and are treated as near-celebrities. Documentary director Joshua Oppenheimer spent years with former gangster Anwar Congo, helping him put together a peculiar artistic exercise: a film dramatizing his methods and motivations, as well as an opportunity to discuss and explain his feelings on being personally responsible for for than 1000 deaths.

Early segments are obscene, with Anwar and his friends gleefully recreating their methods of murder, while mocking the obvious lawlessness of the endeavor. But there’s a darkness that surrounds Anwar, and as the film progresses we get glimpses of how other gangsters (and others directly involved) attempt to exonerate themselves from their own horrific guilt. This darkness comes out in the film within a film, which occasionally slips into surrealism, and occasionally melds with the documentary in ways which make it difficult to tell reality from recreation. It’s beautiful, gripping and – ultimately – incredibly depressing. But it’s also an absolute must-watch.

2. THE WOLF OF WALL STREET

Excess. You’ll find that word in almost every review or article about Martin Scorsese’s THE WOLF OF WALL STREET, and by the end of this inundation of sex, drugs and money, money, money you’re likely to feel chewed up and spit (or shit) out – and that’s entirely appropriate.

You see, the real-life tale of Jordan Belfort isn’t quite a cautionary tale. It doesn’t rely on setting up his rise only to witness a clear fall from grace. While WOLF is rightfully compared to GOODFELLAS, it’s really a story about a set of criminals who are so far above traditional movie “wise guys” that true punishment is nearly impossible.  Belfort, as played by Leonardo DiCaprio (in his very best performance), is charismatic, handsome, fun, and believes fervently in the power of finance. He’s also, of course, thoroughly immoral and detestable, but that just makes his rise so startling to witness.

Scorsese – working at the very top of his game – allows the audience to get wrapped up in this excess. To embrace it. To envy it. And why shouldn’t they? Belfort doesn’t really show regret. He’s not brought down to the audiences’ level. Even at his lowest. as a convicted criminal, he still exists on a social and financial level well beyond what most of us could ever dream of. It’s the darkest of dark comedies, with too many wonderful performances and moments to mention. It’s also the scariest movie of the year, because its final message is that some people truly are untouchable.

I started my list with a 2011 film, so why not end with a 2014 film? I saw WHY DON’T YOU PLAY IN HELL at TIFF, where it was a minor sensation and handily won the people’s choice audience award. Unlike Scorsese’s WOLF OF WALL STREET, which used an epic run-time to overwhelm the audience with excess, Sion Sono’s two hour-plus film embraces the viewer, taking them by the hand as Sono navigates two bafflingly disparate tales that – beyond all reason – eventually meld together. And, of course, it ends in a truly mind-boggling bloodbath that coats the screen with blood and strewn body-parts.

But this is a celebration. Of creativity. Of following your dreams. Of never giving up. And it was both the funniest and most inspiring film I saw in all of 2013. The love for films and film-making is overwhelming, with Sono embracing both the quirky subject matter that has defined his recent films, as well the exploitation elements of his earlier work. Every aspiring filmmaker should watch this. Every fan of cinema should see it. It’s beautiful insanity, and I can’t wait to watch it again.