Home  ⁄  The Wire  ⁄  DRAFTHOUSE FILMS DROPS ALL KINDS OF GRINDHOUSE COOL WITH A LOOK AT TRAILER WARS!

Wanna see something that is all kinds of grindhouse cool? Of course you do. The Alamo Drafthouse originally partnered with Synapse back in the day for Volume 6 of the 42ND STREET FOREVER trailer compilation, but now that Drafthouse Films has formed, they are ready to bring their own brand of crazy to the compilation world. This is an extremely well done trailer for their upcoming release; on a scale of 1-10 this is a crazy rad 10 that I could watch on a loop. A 35mm theatrical tour kicks off this December and hits Blu-ray/DVD on December 18th on DrafthouseFilms.com. Anything that pairs Jim Kelly with Roger Browne is a “get” in my twisted cranial pudding. Well played, Drafthouse, well played. Check out the official press release after the trailer. 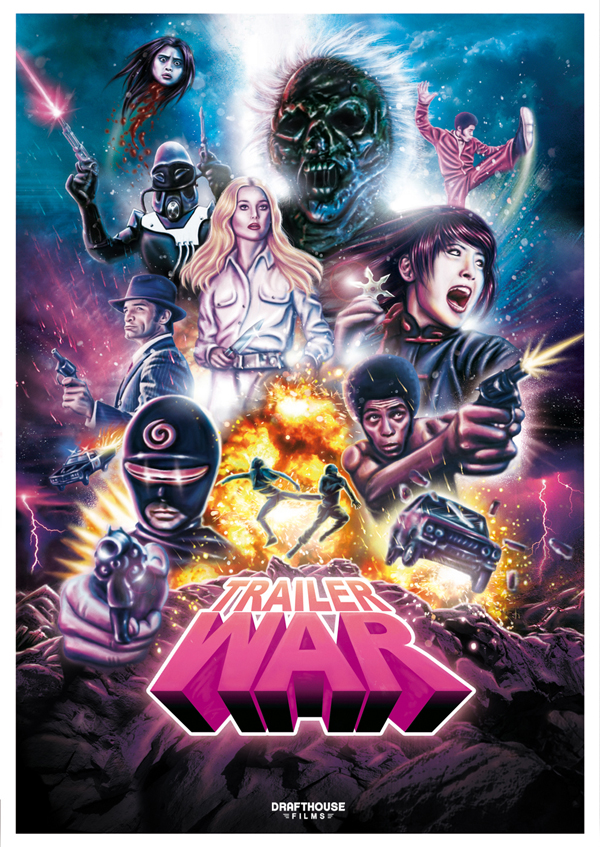 The skinny on the flick:
Drafthouse Films, the film distribution arm of the Alamo Drafthouse Cinema, has partnered with the American Genre Film Archive to release Trailer War, a meticulously curated feature-length program of vintage, rare 35mm coming attraction trailers. Each of the selections is presented for the first time in high-definition, and most have been previously unavailable on any home video format. A theatrical tour presented in 35mm is planned for December 2012, and pre-order is available now for DVD/Blu-ray fan packs which will be available December 18th exclusively on DrafthouseFilms.com. Animal Protector and Amuck, both featured on the compilation, are available now as free digital downloads in HD by clicking here.

The American Genre Film Archive is the largest “exploitation film” archive of its kind, housing more than 3,500 rare 35mm film prints and trailers. Many of the trailers sourced for this compilation were rescued from impending destruction and donated by Alamo Drafthouse founder/CEO Tim League. In one instance rumors of a hidden cache of trailers located deep within a South African warehouse led League to investigate. After a series of fruitless negotiations, a distant relative brokered an illicit cash exchange in a hotel lobby and smuggled 200 pounds of celluloid from Johannesburg back to Austin. In another excursion to a decrepit, partially-flooded storage facility in southern Missouri, League agreed to the take-all-or-none stipulation and loaded a truck rated for 13,000 pounds with 26,000 pounds of celluloid. “It was during this shaky, 30-mph drive back to Austin while jettisoning soggy, damaged prints at rest stop dumpsters along the way where I conceived of the idea of the Genre Film Archive,” says League, “I had to have some rationale for buying 500, 35mm prints and countless trailers.”

It’s a crippling overdose of towering flames, mechanized destruction, lurking fear, poor sexual choices, and spiritual devastation on an apocalyptic scale. You might want to have a cornea donor standing by just in case…because THIS IS GOING TO BURN!