True horror fans understand that horror is not just a genre of film or literature. It’s more than just entertainment. Horror is a subculture unto itself. It’s the way you think, who you interact with, and the way you dress. Many focus on making a statement by wearing a T-shirt of their favorite horror icon.  That’s all well and good, but two years ago, a new trend began emerging amongst the horror community… That trend was enamel pins!

For the longest time, you might see enamel pins here or there at horror conventions, or online in Etsy shops, but it wasn’t until June of 2015, when CREEPY CO. hit the scene and took no prisoners, that enamel pins became a must-have collectible for every horror fan. Their attention to detail and commitment to top-notch art put them at the forefront of the collectibles scene. 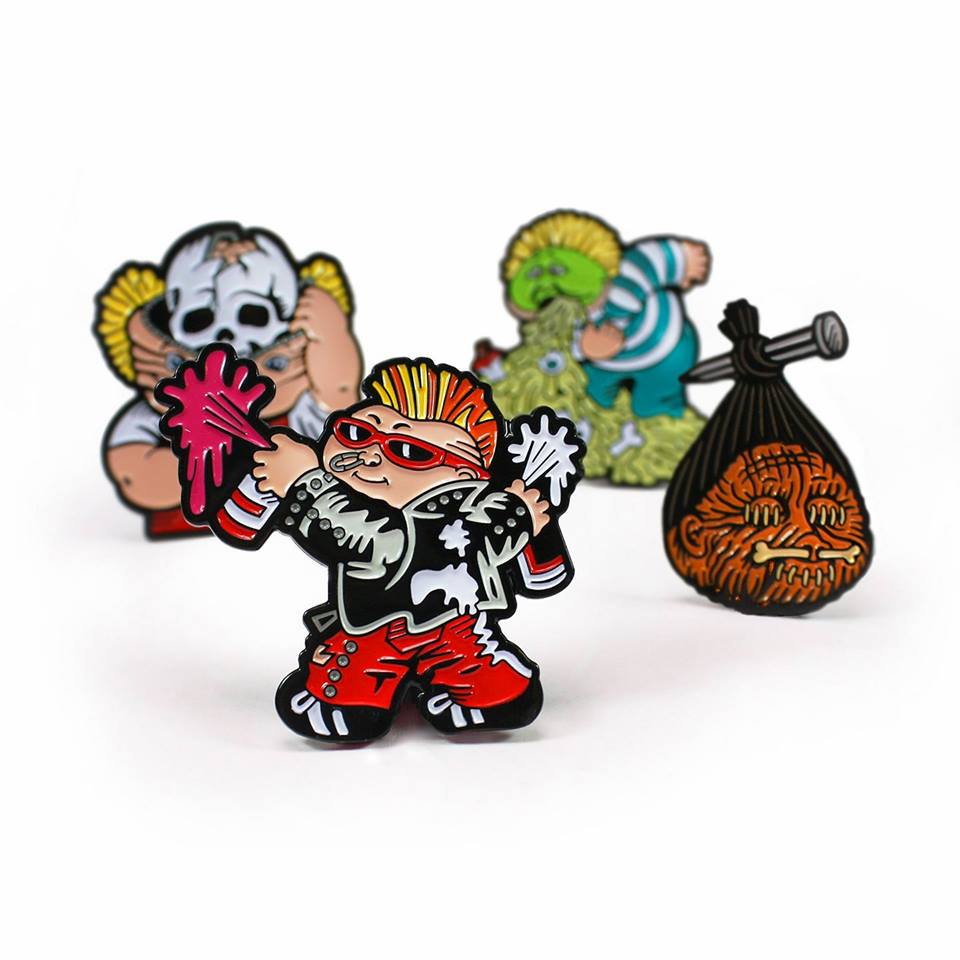 CREEPY CO.’s original line was based on classic cult movies. Some of my favorite pins of theirs included THE STUFF, ROCKY HORROR PICTURE SHOW, MOTEL HELL, and SLEEPAWAY CAMP. In addition to their movie-based collectible pins they also had pins, patches, and apparel adorned with their trademark retro plastic fangs, or VHS “Horror” stickers.

Since then, CREEPY CO. has kept on pushing their own limits and has gone further out into the horror fashion scene. They have had officially-licensed apparel and accessory collections, including VINCENT PRICE, HALLOWEEN (1978), MY PET MONSTER, GOOSEBUMPS, and BEISTLE. If that isn’t enough to blow your mind, they’ve also collaborated with world famous artist Mitch O’Connell (Trump/THEY LIVE mash-up and VINCENT PRICE) and Gary Pullin (NIGHT OF THE LIVING DEAD, AN AMERICAN WEREWOLF IN LONDON, and MAXIMUM OVERDRIVE enamel pins). 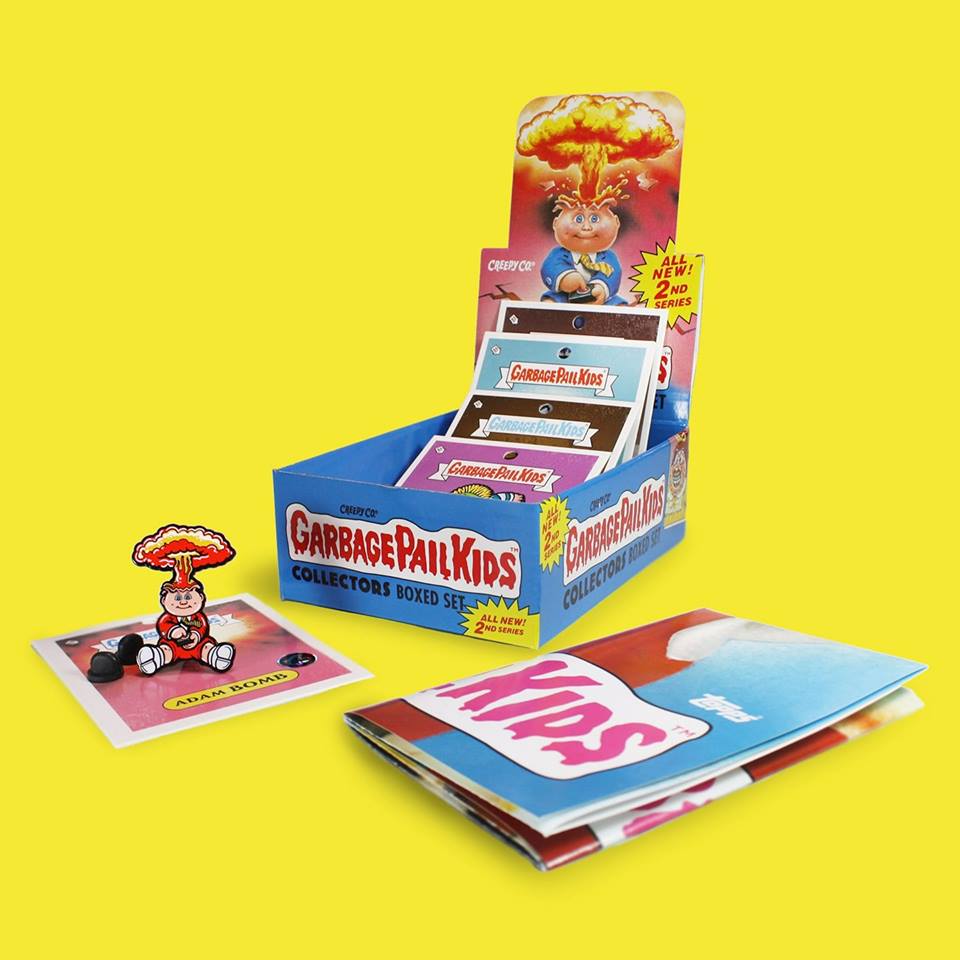 In September of this year CREEPY CO. made broke major news when they released Series 1 of their GARBAGE PAIL KIDS SERIES. Every horror-loving nerd who grew up in the 1980s lost their collective shit. Unfortunately, Series 1 didn’t include any apparel. Sure, the enamel pins, the button pack (which included six retro-style buttons), and the puffy sticker pack (12 stickers in all), that featured the most horror-centric characters — including: “Adam Bomb,” “Nasty Nick,” “Dead Ted,” “Bony Joanie,” “Grim Jim,” “Weird Wendy,” “Juicy Jessica,” “Frank N. Stein,” “Eerie Eric,” and “Bony Tony” — were amazing, but the fans wanted more. The fans wanted something different.

CREEPY CO. listened to the fans, and delivered. Series 2 just dropped in December. Talk about face-melting awesomeness! Not only did they continue with their badass enamel pin collection, but they upped their game by including “Adam Bomb” and “Bony Tony” socks, vintage-style zipper pulls, and a fleece blanket that is an exact replica of the original GARBAGE PAIL KIDS wax wrapper! 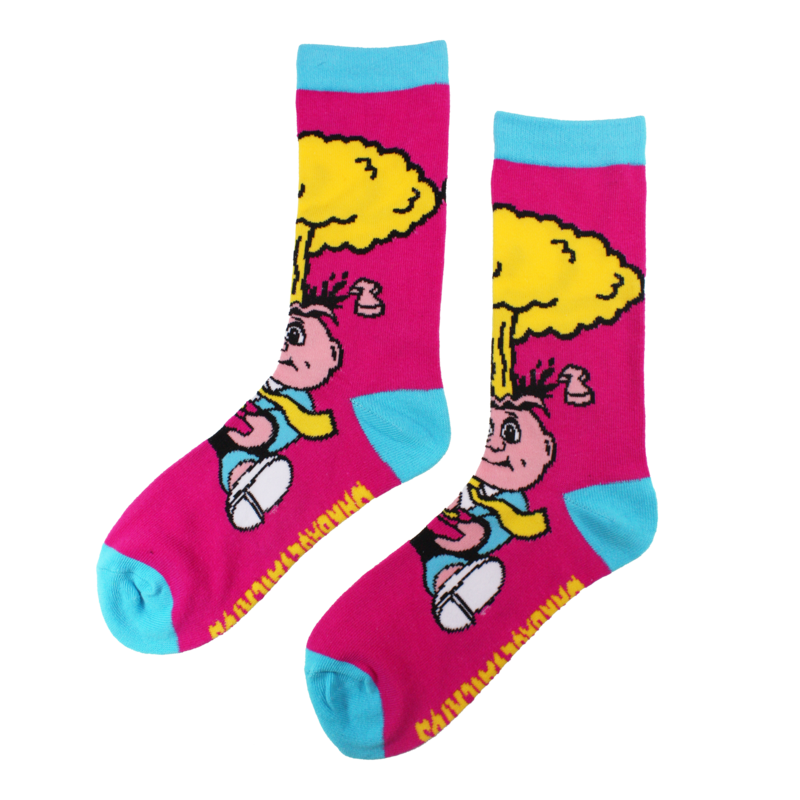 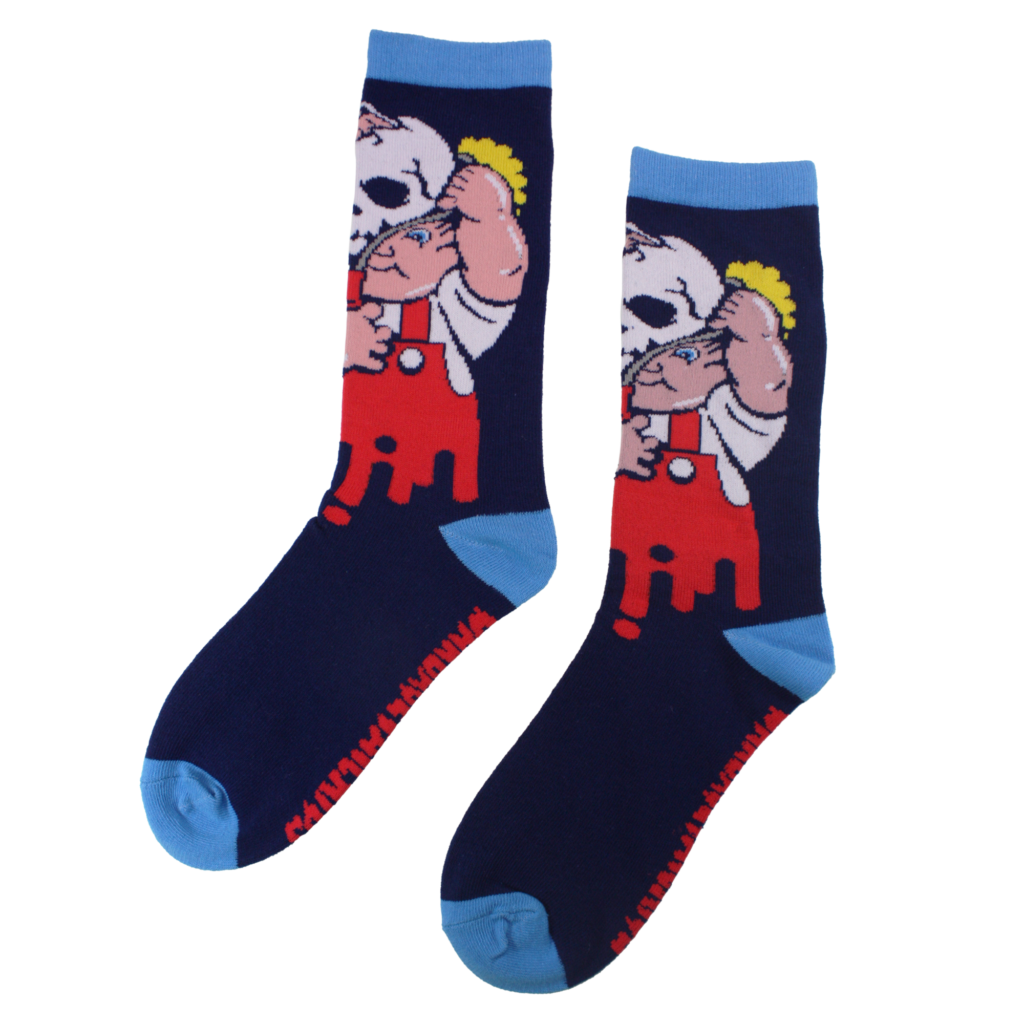 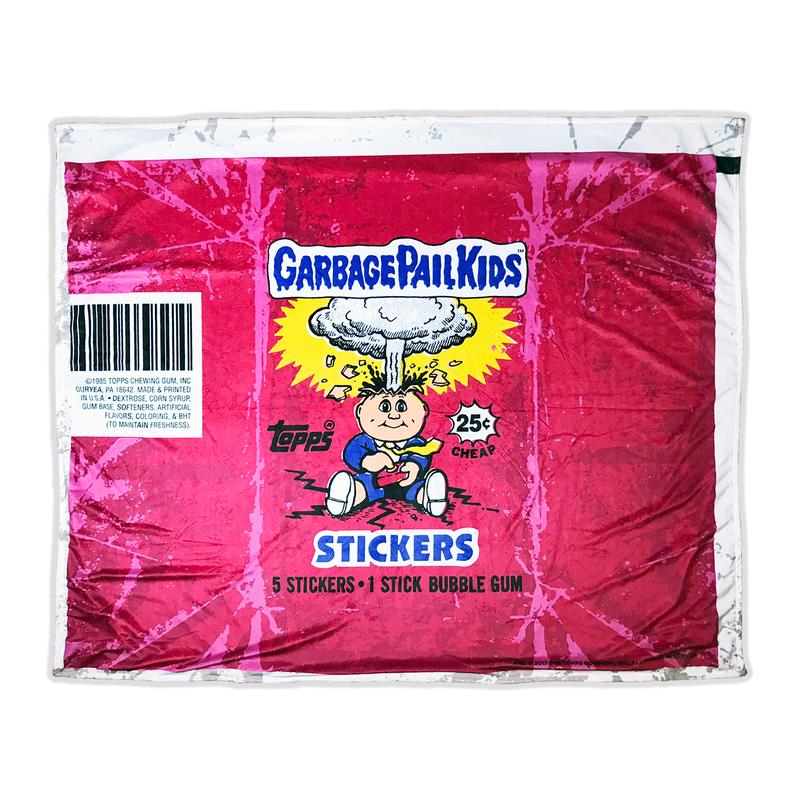 Out of all the new GARBAGE PAIL KIDS items that CREEPY CO. have put out, the two that are must-haves for me are the new “Adam Bomb” windbreaker/coach jacket, and the all-over print “Adam Bomb” button-up… it’s simply to die for. 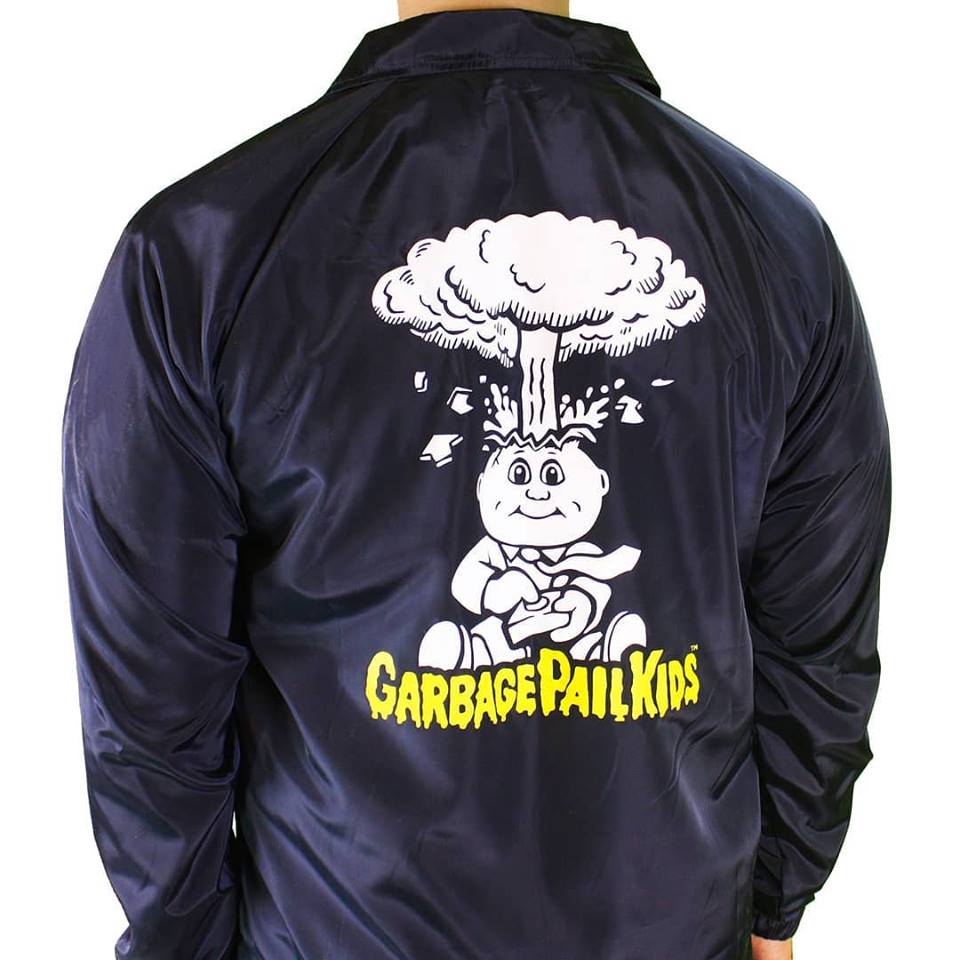 When asked about how the CREEPY CO. and GARBAGE PAIL KIDS collaboration came about, CREEPY CO. co-founder Kellie Taylor related, “I reached out to Topps well over a year ago to do GPK licensed merch. It’s a personal favorite piece of pop culture for me, and the license is such a good fit for CREEPY CO.! This was still early on in our existence, so I didn’t have very high hopes for securing a license. Luckily, Ira Friedman decided to take a chance on our passion, and we went back and forth for several months on what a CREEPY CO. x TOPPS GARBAGE PAIL KIDS collaboration would look like.” 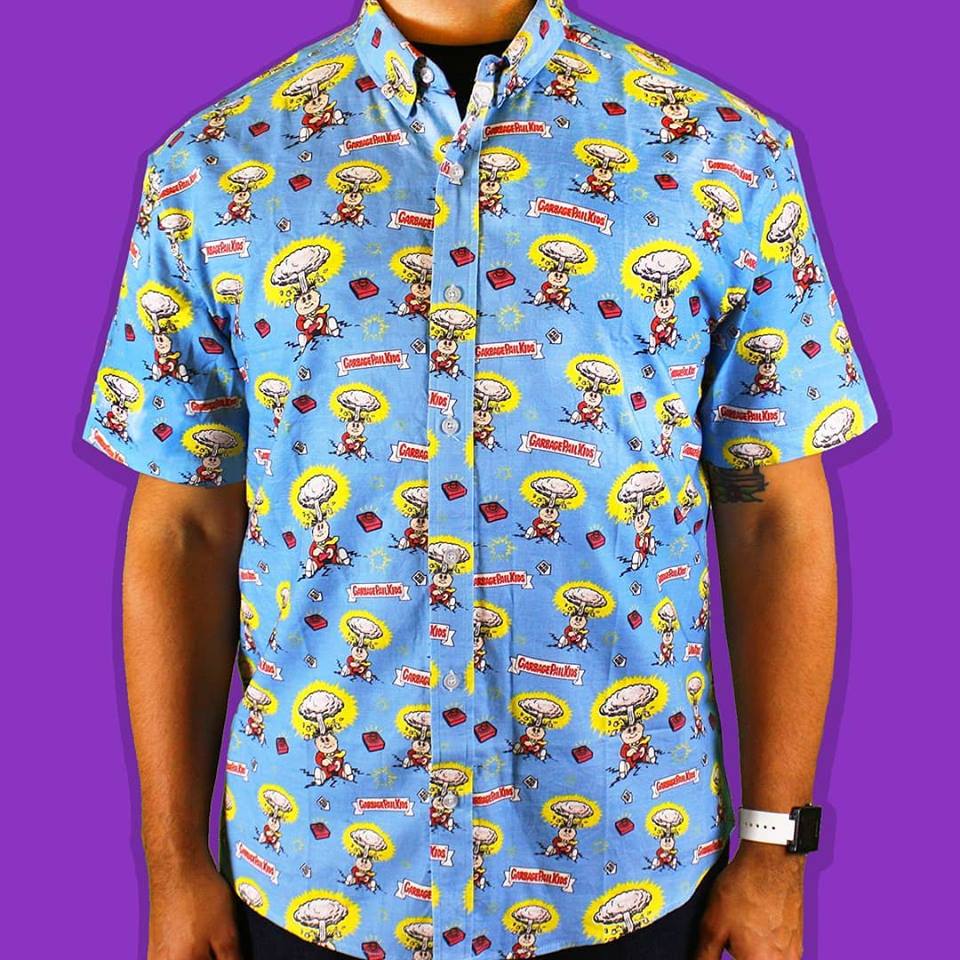 Taylor continued: “I have intensely vivid and fond memories of GPK. I was instantly drawn to the graphics: the simplicity of concept, the naming theme, and the “taboo” subject matter. It felt like something uniquely for kids, but something that was very sophisticated in nature; like a language only we understood. The fact that it was routinely banned by schools and in many homes (mine included!) was just a testament to its awesomeness!”

“After CREEPY CO. was granted the license, I started thinking about things that I wanted to see, as a collector myself. Because we got our start with pins, it was natural that we’d do an ongoing enamel pin series. But I wanted to do some things that no one else was doing, or had done. A personal favorite part of GPK history for me is the Imperial Toys catalogue. I knew I wanted to focus some of our efforts on bringing those items back as replica products. Our latest release includes a series of 12 blind-bag “Zipper Pulls,” which are pretty spot-on recreations of the original Imperial Toys Zipper Pulls.” 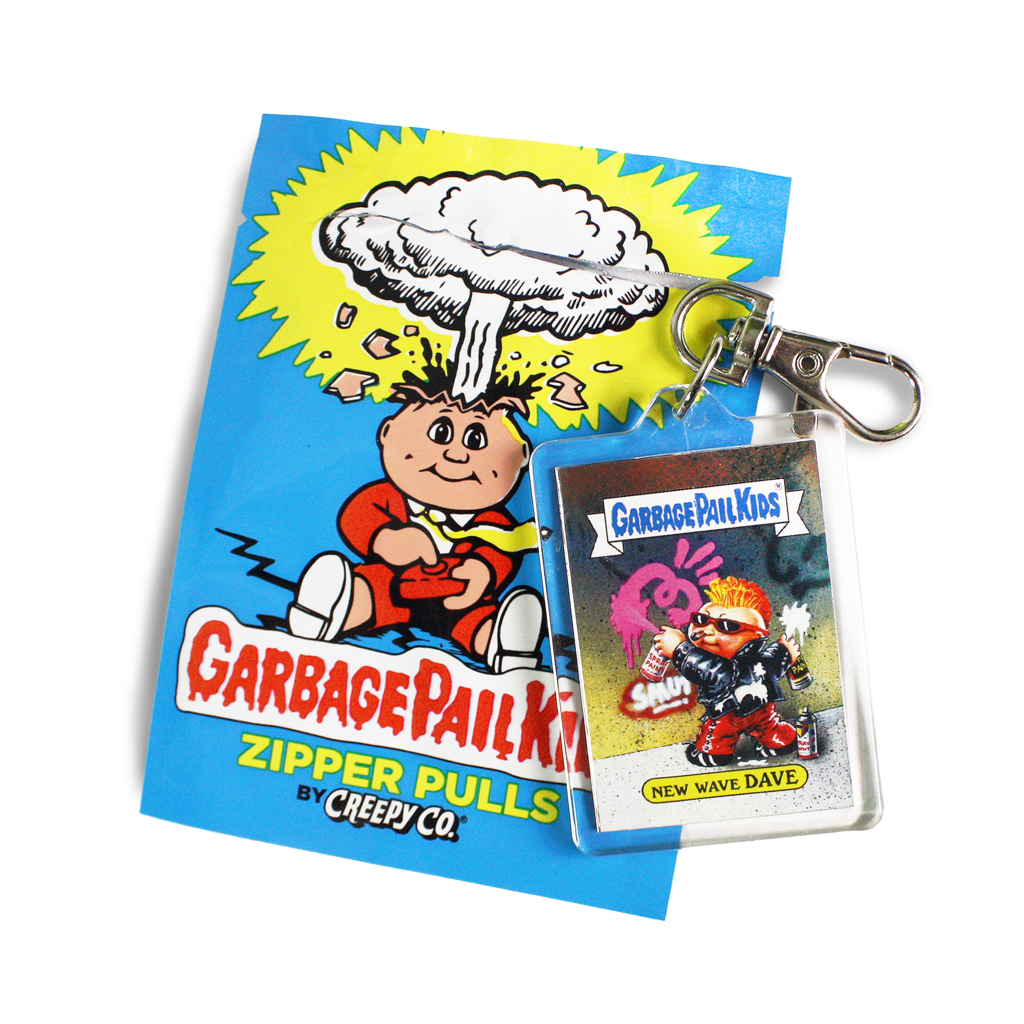 “In addition to “things,” we are starting to focus in on apparel. We don’t have the license for T-shirts at present, but we do have Topps’ blessing to do specialty clothing items. Our button-up shirt and coach jacket are our first additions to the apparel category, and they’re great! They’re the perfect way to take this passion for GPK collecting and wear it on your person. It’s the ultimate means of expressing fandom: covering your naked bits with images of what you absolutely love.”

“Look for lots more GPK stuff in the months ahead! Should be real fun to see where this goes!”

If you haven’t finished your holiday shopping, head on over to CreepyCompany.com: Even if you aren’t buying any presents for loved ones, buy it for yourself, and be the envy of all your horror-loving friends. Between their commitment to quality and their above-and-beyond costumer service, you won’t be sorry with your choice of CREEPY CO.!