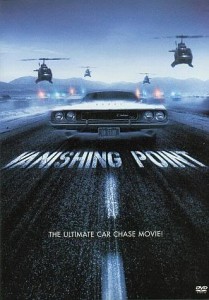 1971’s VANISHING POINT is a true cult classic: A uniquely cool, existential car-chase movie from the 1970s, back in the days when an obviously Jewish guy could be the star in something other than a comedy. The man is named Kowalski (played by Barry Newman) and he has to drive from Colorado to San Fran in under fifteen hours to meet a bet. Speed limits are to be damned. 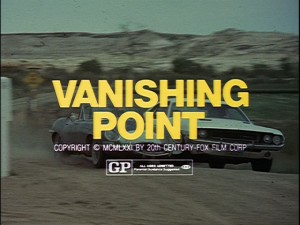 VANISHING POINT is a movie with wide-ranging concerns. There are hot gas station attendants and naked biker chicks, race riots, homophobic cops, gay hitch-hikers, rattlesnakes, ghosts, and a vintage Dodge Challenger with more personality than most modern movie stars. Cleavon Little (BLAZING SADDLES) is in there too, as a blind radio DJ who serves as the film’s Greek chorus. The cinematography is by John Alonzo, who also shot HAROLD & MAUDE, CHINATOWN, and SCARFACE, and so it beautifully captures the southwestern American highways and serves as a deceptively profound snapshot of an uncertain era in this country’s history. 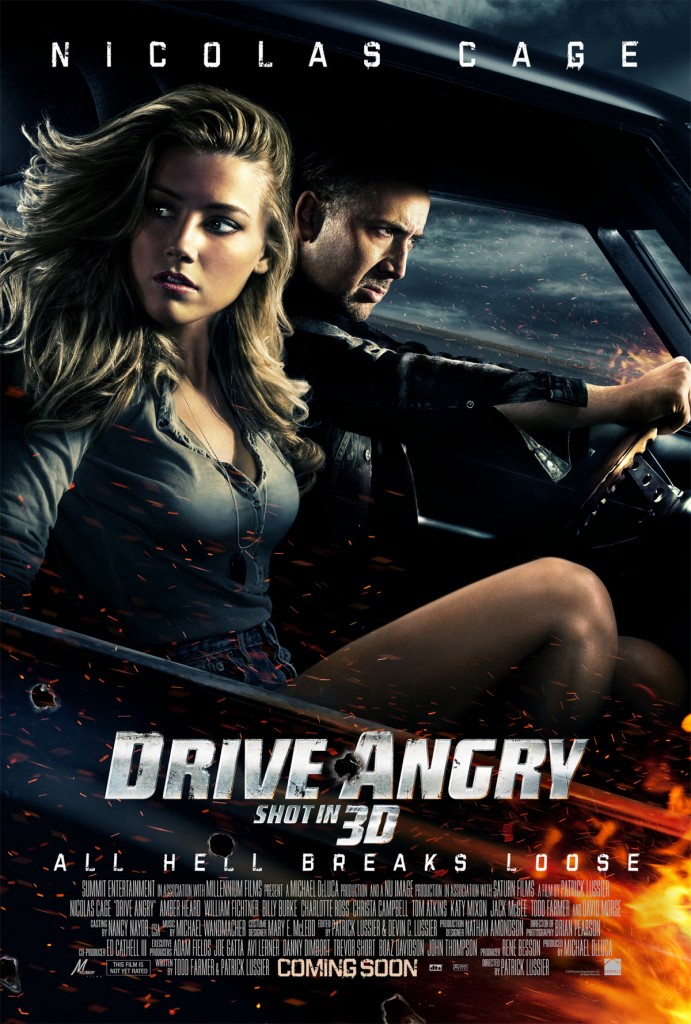 Last year’s DRIVE ANGRY 3D is like the Rob Zombie remake of VANISHING POINT. I guess that’s not a compliment. What I mean is, everyone involved obviously had their heart in the right place and very clearly loved all the things that we all reading this love so much. But ultimately what they came up with is a facsimile, an attitude, a pose, and not an artifact that is likely to bear up over time. No matter how much you love cult classics, it’s hard as hell to make one. 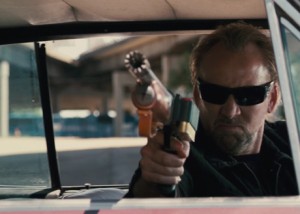 Co-writers Todd Farmer and Patrick Lussier (who directed) previously made 2009’s MY BLOODY VALENTINE 3D, a knowingly trashy and cleverly gory horror remake which actually preceded AVATAR and the resulting 3D boom by several months. I was really looking forward to their next movie, especially because they were to be working with one of the few great wackadoo movie stars of the modern era, Nicolas Cage. A Cage movie is a risky prospect these days, because you can either end up with something thoroughly abhorrent, or with transcendent weirdness (i.e. BAD LIEUTENANT: PORT OF CALL NEW ORLEANS). Seeing Nicolas Cage as a vengeful road dog with a fondness for fast vehicles might fairly put us all in mind of GHOST RIDER, but I had higher hopes. Still, I knew the deal. With modern-day Cage movies, there’s not a whole lot of middle ground. 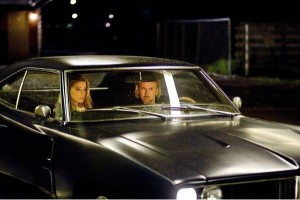 DRIVE ANGRY is actually as near to middle-ground as it gets. It has several inspired moments, Cage is on-point when it comes to matching his performance with the movie around him, and the supporting cast — including William Fichtner, David Morse, Jack McGee, Eastbound & Down’s Katy Mixon, and the legendary Tom Atkins — is generally a pleasure. 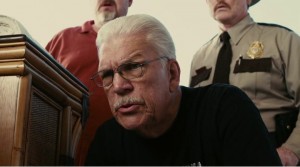 The main problem with DRIVE ANGRY, in which Nic Cage commandeers some hot-ass cars and a hot-ass lady sidekick on his road to vengeance against the men who ruined his life, is that it’s been sold and set up in every way as a car movie, and it so badly wants to be one. 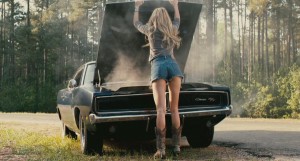 But there’s hardly any car action in the movie! And when a car chase does happen, it’s fairly standard (even the one that involves a Winnebago, which is a bit of fun but has been done before, as far back as RACE WITH THE DEVIL). A whole lot of business happens in this movie which has nothing to do with cars. There are a lot of walking scenes. There are a lot of shootouts. There’s one particular shootout that takes place in the middle of a scene where Nicolas Cage is fucking a waitress, and he doesn’t stop that while he’s shooting, and it’s all scored to a great song by the Raveonettes, and none of this is easily forgettable. There’s even a scene where Nicolas Cage drinks out of the hollowed-out skull of one of his enemies, and don’t think I don’t appreciate very much scenes like this one, but still — no cars. 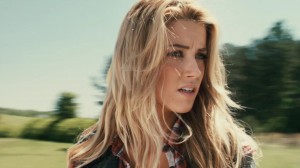 The other problem is that DRIVE ANGRY’s promotional campaign and many trailers made no secret of the movie’s premise, the supernatural element that makes possible Cage’s quest. If you’ve heard of the movie before now, you definitely know what I’m talking about. I’m talking about the fact that Cage’s character was dead, and he breaks out of Hell in order to seek revenge. I mean he literally drives his car out of Hell. Obviously, I’m not interested in talking you out of seeing the movie, but I am willing to nitpick. In light of that particular plot twist, which we all knew about going into the movie, it’s majorly disorienting that two-thirds of the movie goes by before it gets revealed. Every character in the movie keeps asking Cage where he’s from, but all of us guys in the audience, we already know. It actually doesn’t feel so good to be one step ahead of the movie you’re watching. A movie loses its element of surprise when you already know where it’s headed. 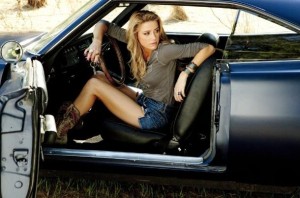 Okay, but what does work about the movie? The easiest answer: Amber Heard. This girl is hips and motion, all smoky voice and arched smile, stunning but more importantly, blessed with genuine screen presence. Her character’s immediately-formed loyalty to Cage’s skeezy, shifty character makes no sense on paper, but as an actor she manages to almost keep you from noticing. She’s at least as funny as Cage is (and on purpose!), clearly up for anything, and since she has more screen time than ladies usually get in a film like this, it helps that she can carry it on her own. In my opinion, this girl is two or three movies away from being as big a movie star as she wants to be. We’ll see how that turns out. 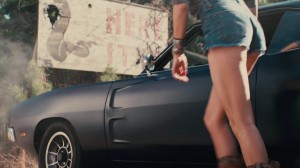 Meanwhile, the question of how DRIVE ANGRY would turn out has been resolved. As a fan of the kind of movies DRIVE ANGRY was referencing, I feel like I got the point, and there was fun to be had along the way, but ultimately, since I know how great a movie like this can be, I can’t help but feel let down. Looking forward to DRIVE ANGRY and then finally seeing it was like hooking up with a beautiful girl you’ve been crushing on for months, only to discover that she’s a sloppy kisser. You’re still happy to be there of course, but it could have been so perfect, and it’s not. 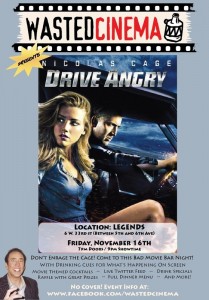 But it’s still a kick if taken in alongside a lively audience, and if you live in New York City, you’re in luck: DRIVE ANGRY is playing tonight courtesy of Wasted Cinema. Apparently Wasted Cinema is a semi-regular event in town which screens drinking-friendly junk-flicks and encourages the crowd to be as rowdy as the situation demands. I’ve not yet attended any of their events but I like the cut of that jib. And tonight’s event will be raising donations for Hurricane Sandy relief. So check it out if you can! Click this sentence for showtimes and details.