You really gotta take off your hat to Shout! Factory. They are an amazing company that has been putting out some of the best DVDs and Blu-Rays in the past few years (and prior). Their Corman Classics sets are just stunning. They are truly the Grindhouse Criterion. I’ve also been a fan of their double feature sets. Take for example this BAD DREAMS/VISITING HOURS set. You like yourself some NIGHTMARE ON ELM STREET type shit? Of course you do. Well BAD DREAMS has a lot in common with the best of that series, but for me, I like it more.

Richard Lynch is a fella you’ll instantly recognize from various genre fare and he is just fantastic in this. Creepy as all hell. You’ve also got a direct tie to the NIGHTMARE series with the casting of Jennifer Rubin (who was also in DREAM WARRIORS). The films pedigree continues as it also stars Bruce Abbott (RE-ANIMATOR), Dean Cameron (SUMMER SCHOOL, ROCKULA), and the wonderful E.G. Daily (VALLEY GIRL, PEE WEE’S BIG ADVENTURE). 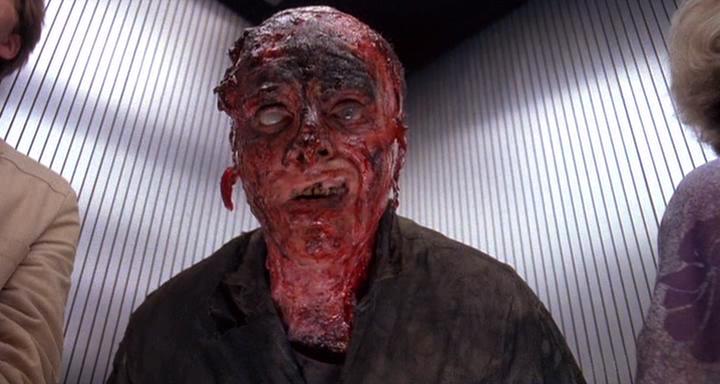 I won’t go too much into the plot as it may sound kind of familiar, but let it be said that this film is worth your and even has a few surprises here and there.  It’s certainly one of the more under-appreciated horror films of the 80s. The DVD includes A commentary from writer/Director Andrew Fleming, Interviews with the actors (Rubin, Abbott, Lynch, Cameron), a Special Effects featurette, the Trailer and a Behind the Scenes feature on the original ending of the film.

Next we have VISITING HOURS starring Michael Ironside, Lee Grant, and William Shatner. If you’re sleazy Ironside needs were not met by some of his prior work, this is your movie.

Lee Grant has a pretty varied career previous to this. I think it’s one of the few slasher type flicks she starred in. From SHAMPOO, to AIRPORT ’77 (which I’ve always dug) & THE SWARM (also awesome) to DAMIEN: OMEN II.  Here she plays the TV Journalist who brings about some freaky Ironside wrath and it gets ugly. The Shatner shats it up with his usual Shatness. Included on this disc are The Trailer, Radio and TV Spots.

All in all a cool set and easily worth picking up for you genre (and character actor) fans out there. BAD DREAMS gets a HIGH recommend from me for sure. See it!

2-disc double feature comes in a standard sized keepcase with a flipper.