I do understand the rules of roller derby. Granted, I was lost the first time I went to a match – it seemed like utter chaos, women bolting around the track at insane speeds while jams and blocks and pivots and things happened. By the end of the first matchup, however, I had figured it out, at least to the point when I could tell when things were going well for one team or another. By the end of the evening, I had the rules down.

Just don’t ask me to explain any of ‘em. Ask me to go to the roller derby with you and I’ll rush for the car. Ask me how it all fits together, and I’ll make some noises that sound like thinking while I frantically click my phone and eventually read you the Wikipedia entry. About cricket. It is possible that I’m just terrible at explaining things to people. 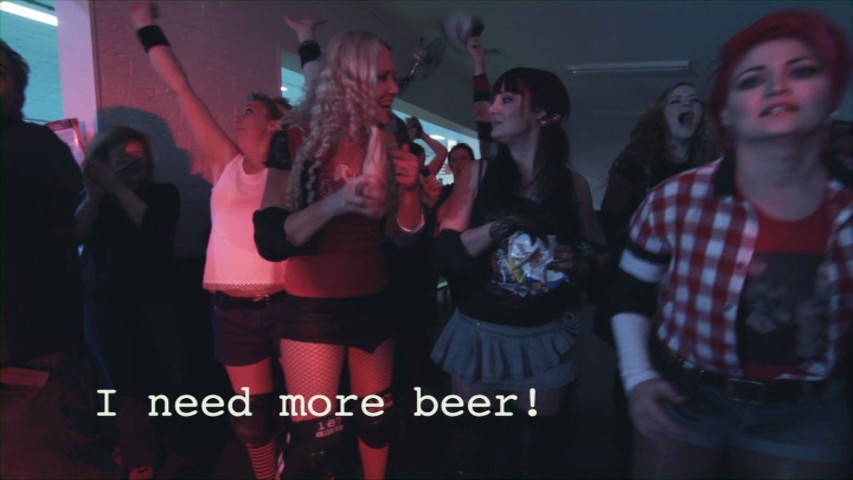 Being bad at explaining things to people, however, won’t stop me from writing about movies, and that’s the perfectly awkward segue into writing about MURDERDROME, a new import from Australia recently issued by Alternative Cinema under their Camp Motion Pictures line. MURDERDROME is a gleefully bloody tale of a roller derby team against the supernatural, and it’s just as energetic and fun as the sport itself.

The cause for all the havoc is Cherry Skye (Amber Sajben), who unwittingly unleashes a Satanic former roller derby team that vanished twenty years ago when sheepish derby fan Brad (Jake Brown) gives her an amulet. Cherry, Brad, the rest of her team and a rival trio led the bitchy Hell Grazer (Rachael Blackwood) are forced to defend themselves against the sinister Demonique, a leather-clad baddie on rollerblades (as opposed to the skates of the living) whose chained weaponry and minimal speech makes her come off like a badass burlesque queen cenobite. 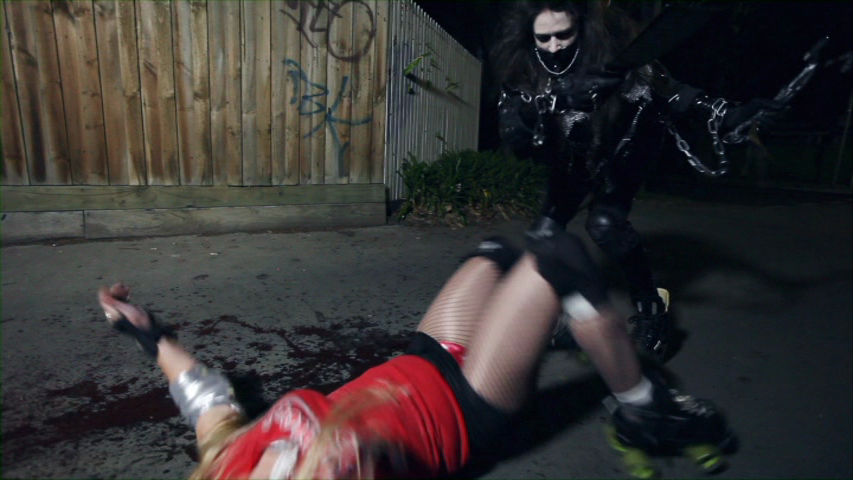 It takes a little time for this face-off to begin, mind you, and a good portion of the film is spent with the ladies who launch, and that’s a wise move, as they’re a fun group to hang out with. A line of dialogue like “I’d offer an opinion but I don’t have one on account of not caring vary much” could be taken as a negative aspect to a character, creating a persona that seems defined only by making the audience hate them, but in the hands of MURDERDROME’s cast and Daniel Armstrong’s direction, it feels like a friend frustratingly jibing another friend. It’s all in good fun, and that’s the general tone that MURDERDROME carries in spades.

Heck, even when our hell-raiser starts offing the cast, things don’t feel entirely grim. The murders themselves are an admirable mixture of goofy and brutal, and they’re often unexpected. A mysterious janitor figure that resembles a mid-‘80s Alice Cooper shows up to explain the plot but otherwise doesn’t add a hell of a lot, but when the screen time is given to the main cast, MURDERDROME scores all the roller derby squad point goal runs. (See, I’m like The Who with sports. Can’t explain.) 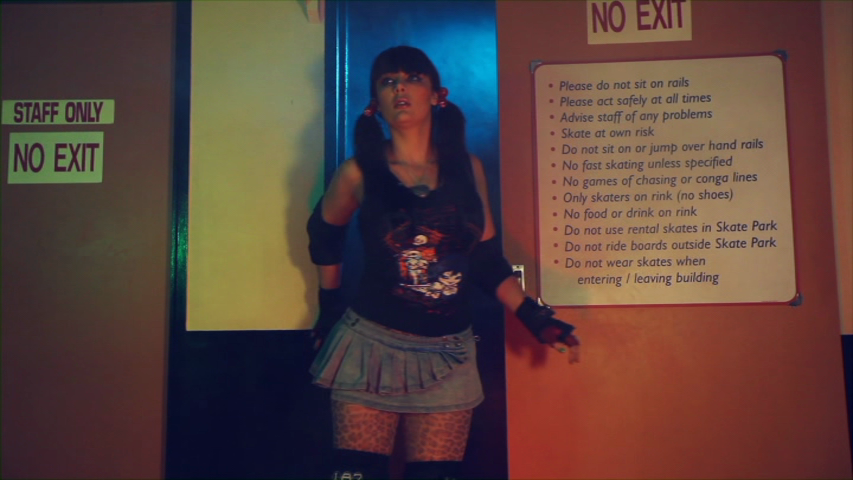 It’s a tone that’s tough to crack, and Anderson and his cast deserve a lot of credit, making the film fun without turning it into outright comedy and feeling the need to be aggressively jokey. There is plenty of humor, but it comes naturally from the characters, and the tone of the film feels like a natural extension of the characters’ devil-may-care attitude. The great surf and garage rock soundtrack helps as well, even if it falters a bit with one more metal-influenced track, and the CGI used in the film, while obviously fairly cheaply made, is creative in its idea and rarely steals the spotlight from the ladies fighting for their life and, for the most part, it works quite well with the film’s colorful look, full of greens and reds that make for a much more visually notable work than the budget may suggest.

MURDERDROME is probably not the pinnacle of roller derby-based cult films – the middle section features a bit too much running around alley ways and those (like myself, admittedly) who hoped that the film would climax with a match between the “good” and “evil” derby teams facing off will be a little disappointed. It is, however, a perfectly entertaining one, and one where you can see the love of making the movie coming across on screen until its well-conceived closing credits roll. 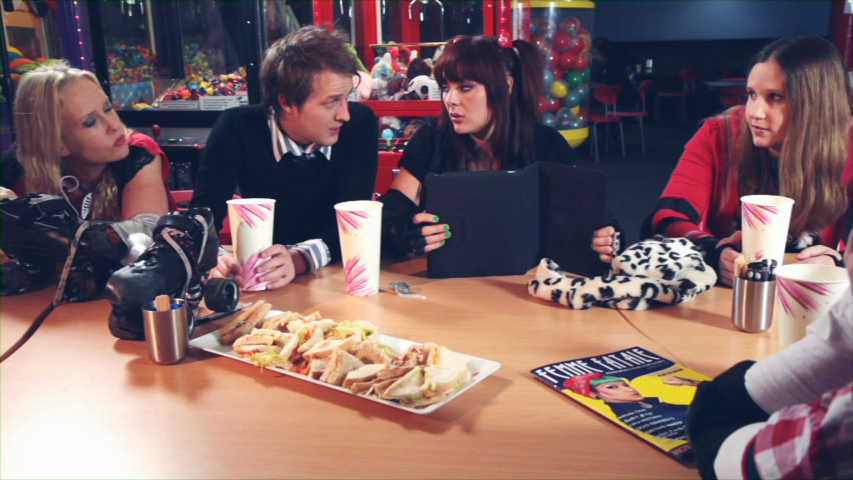 If that’s not enough love, the Alternative Cinema DVD also includes a rather chaotic commentary track featuring the cast and crew, in which they talk about their day jobs and go into working on such a labor of love in their free time. Some outtakes and FX tests are also included, along with several music videos, though one, “Alice in Zombieland,” is a full 13-minute short film! Trailers for other Alternative Cinema releases round out the nifty package, completing a solid release of a nifty little flick that makes up for in charisma what it lacks in budget.