In 1976, NBC aired the miniseries SYBIL, starring Sally Field as the titular woman who struggled with 13 different personalities.  The film, based on a biographical book by Flora Rheta Schreiber, was a huge success, netting several Emmy awards including one for Field.  It’s a story that still holds up today (and, in fact, was adapted for television again in 2007), and the harrowing life of the woman who attempts to maintain the baker’s dozen of different lives spawned a renewed interest in dissociative identity disorders.

This being the ‘70s, this meant that there soon arose a movie that was basically SYBIL, but with hardcore sex. 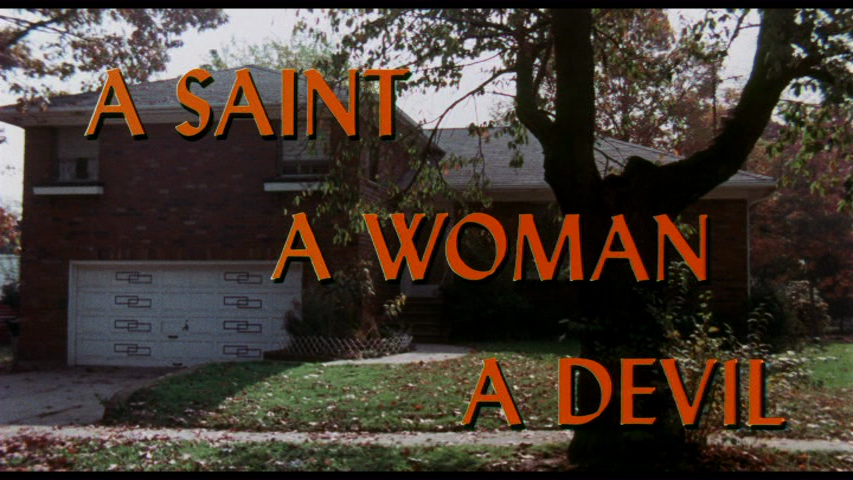 Peter Savage’s SYLVIA, released the following year, makes its DVD debut courtesy the good folks at Vinegar Syndrome, and, as usual, they’ve done a great job at unearthing an exploitation obscurity that may otherwise have been lost to time.  And SYLVIA, issued under the original (and less accurate) title of A SAINT, A WOMAN, A DEVIL, is certainly an oddity worth checking out – it’s a strangely compelling flick that features more tonal shifts than its lead character has personalities.

Joanna Bell stars as Sylvia, a relatively demure young woman who lives on her own — at least physically.  She’s actually got three other women inside her –Mona, the sex-crazed one who magically appears with an amount of make-up that would make Tammy Faye Baker gasp, Tony, the butch lesbian who appears in a curly-haired wig and an outfit akin to “The Facts of Life”‘s Jo, and Mary, the traditional girl who wants to get married before doing the nasty. 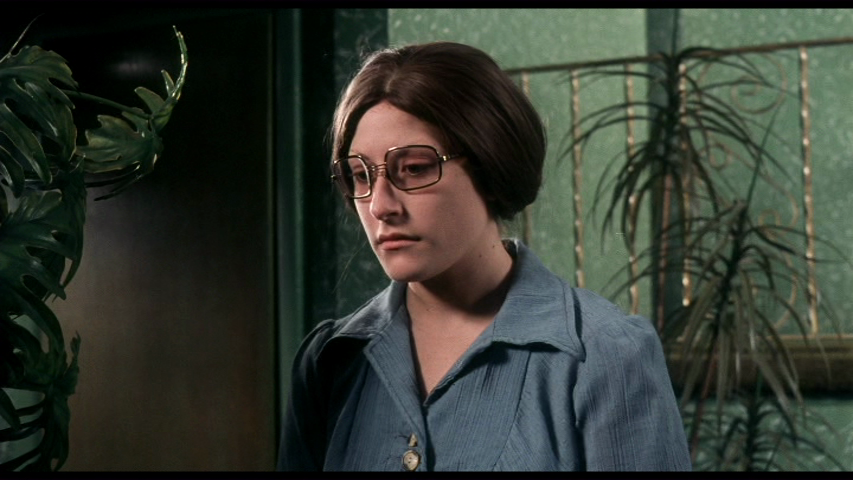 Her psychiatric troubles are noticed by her cousin Toby (Pamela Serpe), who comes to visit with her friend Sheila after receiving some “strange, strange letters,” only to spot Sylvia getting it on with a very well-endowed vacuum cleaner sales played by Marc Stevens.  (“I’d like to direct your attention again to the tremendous sucking power.”) Toby attempts to rectify the problem, much to the chagrin of Sheila, who chastises her for being so sex-negative and quickly tumbles into bed with the Tony persona.

Sylvia soon makes her way through a cavalcade of men, including a man studying to be a minister whom she threatens by hitting him with a giant crucifix, a pair of drug addicts (including Sonny Landham) and Mary’s would-be fiancee, who somehow has no idea about her other lives.  In the meantime, she starts seeing Dr. Balaban (Savage) at Toby’s behest.  In proper SYBIL fashion, the issues all come from Sylvia’s childhood, when she was repeatedly abused by her mother.  Nothing sexier than that! 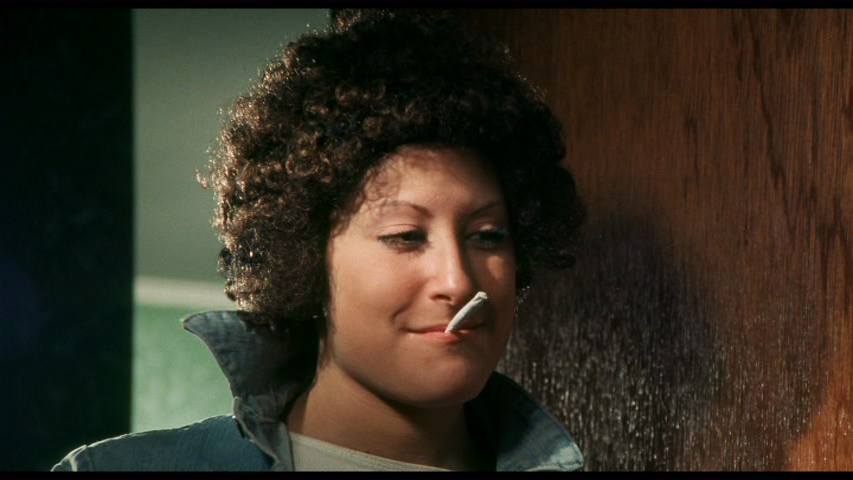 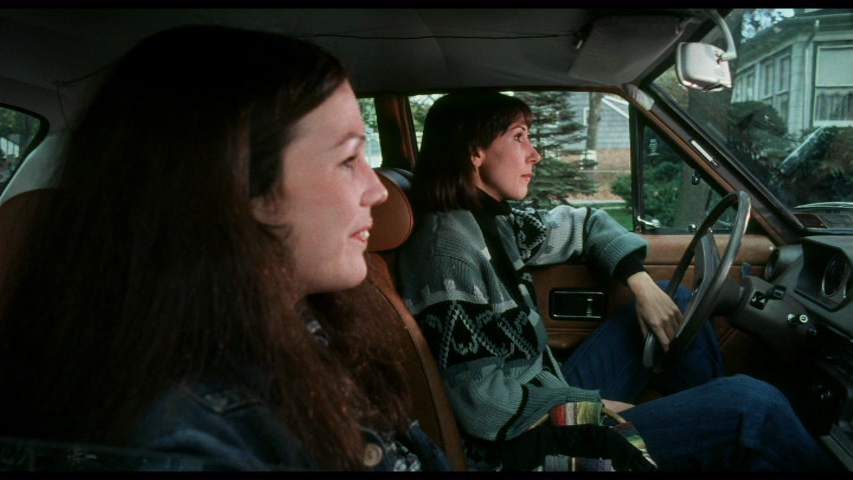 Writer/director Savage even ends the film on a comic capper and endearingly silly freeze frame, which makes you wonder just what the hell A SAINT is supposed to be about.  It touches on religion, pop psychology, feminism, slut shaming and drug addiction, but never stays in one place long enough to get a good idea as to what, if anything, it’s trying to say — and that’s a good part of A SAINT‘s bizarro charm.

Crewed by NYU Film School undergrads and assistant directed by William Lustig, A SAINT is a genuinely strange, but intriguing, piece of adult film history, and Vinegar Syndrome has done a fine job bringing the film to a new format.   The only extra on the disc is the film’s non-hardcore version – sadly,  the commentary with Lustig from the film’s After Hours release has sadly not been ported over.  Owners of that release, however, will definitely want to upgrade — Vinegar’s version of the film is a full 17 minutes longer and features flashback sequences that the earlier edition lacked.  It also looks great — despite some questionable editing choices, Savage had a great eye for framing, and the garish ’70s colors pop beautifully in all their occasionally hideous glory. 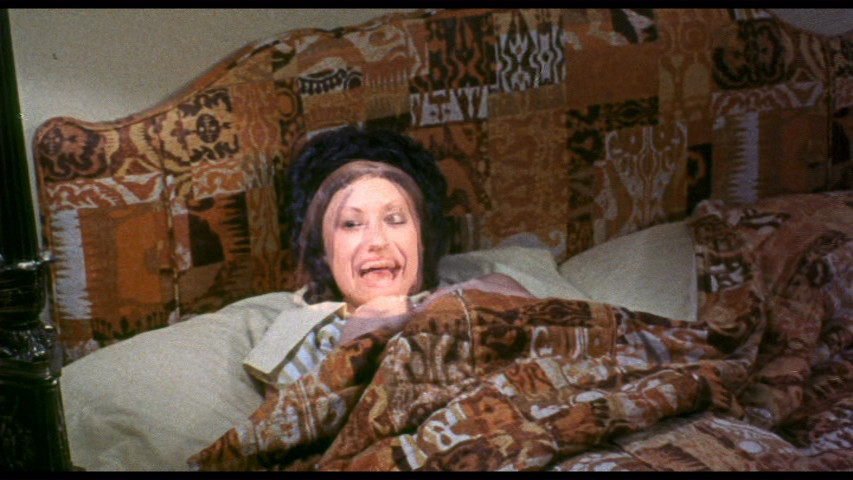 A SAINT, A WOMAN, A DEVIL may, at first, seem to be an odd choice to be a solo feature instead of being shepherded onto one of Vinegar Syndrome’s double bills, but it certainly warrants a place on the shelf all of its own.  Even if it’s hard (if not impossible) to find to idea of multiple personalities “sexy,” A SAINT is such a unique hardcore film that it’s just as hard to ignore its charms.