The oddest thing about Severin’s new DVD release of the astounding 3-disc VIDEO NASTIES: THE DEFINITIVE GUIDE is that it took nearly four years before it reached the United States. First released by Nucleus Films to Region 2 audiences in the fall of 2010, the set quickly became a must-have for cult movie fans, one that provided not only an insane amount of trailers and discussion about 72 sleazy horror flicks of (very) varying quality, but also the context for what made them the noteworthy cult icons that they became.

So why the delay? Why the heck didn’t some enterprising cult film distributor jump on it immediately and ride the bandwagon to get VIDEO NASTIES immediately on the shelf of anyone who could rightly claim themselves a grindhouse movie fan?

For the answer to that, we have to look at the basis for the set itself. “Video Nasties” was the term used in the United Kingdom to specify films that were facing prosecution for those who produced or distributed them based on very regionalized censorship legislation.   There were 72 films instead in all, though only 39 were successfully prosecuted – you can see a list of all 72 here. While the list became moot with the Video Recordings Act 1984, which forced all video releases to receive certification from the BBFC (British Board of Film Censors) in order to hit the market (a stipulation with which many lower-tier horror films couldn’t comply), these 72 titles became significantly harder to find – titles that are now highly sought out by collectors. 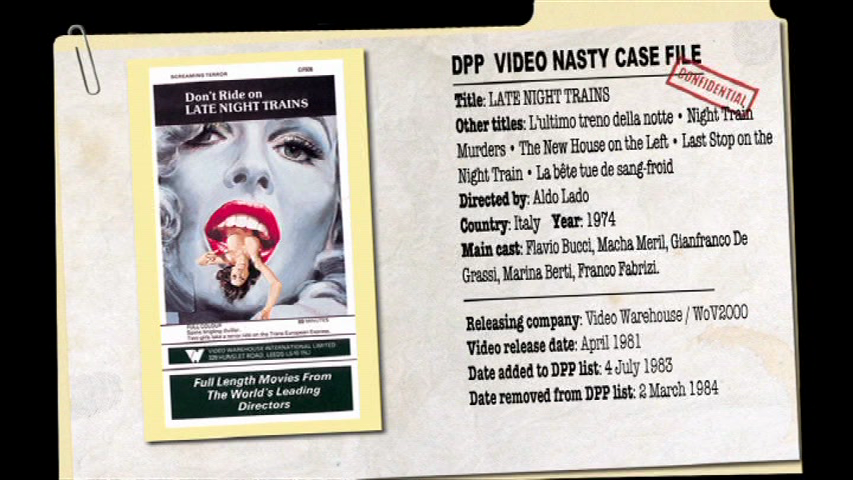 The moral panic of the “Video Nasties” area and the censorship that formed as a result of the subsequent Video Recordings Act didn’t really cross the Atlantic to the United States, at least not in that form. U.S. fans of non-mainstream entertainments were fighting their own battles against their own peal-clutching busybodies, certainly, fending off the likes of the Reagan-appointed Meese Commission from taking away our adult films, Tipper Gore and her Parents Music Resource Center from our music and Patricia Pulling’s “Bothered About Dungeons and Dragons” advocacy group from our role playing games. Sure, there were occasional panicked news reports about 6-year-olds being able to watch A NIGHTMARE ON ELM STREET, but horror films escaped the VCR era mostly unscathed in the United States, thanks to the First Amendment to the Constitution and the fact that no attacks on the gore-heavy genre seemed especially well-organized.

It’s because of this divide that VIDEO NASTIES probably took its sweet time to make it here – we certainly had our own moral panics to examine and pontificate over. It’s also why you, as a reader of sites such as Daily Grindhouse, need to make room on your shelf for this amazing collection. 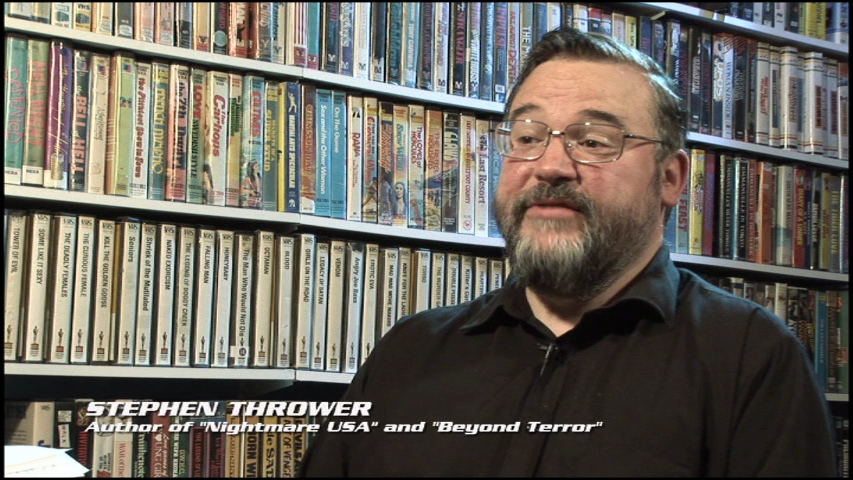 The first disc is the “feature film,” with Jake (RAZOR BLADE SMILE) West’s documentary VIDEO NASTIES: MORAL PANIC, CENSORSHIP & VIDEOTAPE showcasing the history of the “Video Nasty” era and featuring insightful commentary from the likes of those associated with the distribution and prosecution of the films, along with historians like “Nightmare Movies” author Kim Newman, “Nightmare U.S.A.”’’s Stephen Thrower and Allan Bryce, the Dark Side Magazine editor who published a book on the subject. Sir Graham Bright, the conservative MP who introduced the Video Recordings Act and claimed that videos were damaging to dogs (!) emerges as a fascinatingly unrepentant villain, who even in retrospect is still convinced the likes of the cheaply made cash-in SNUFF contain actual snuff footage. The Nasties’ leading instigator, reactionary Christian advocate Mary Whitehouse, passed away in 2001 and thus not interviewed, but West serves up more than enough archival footage to make her case, and hypocrisy, plainly evident. 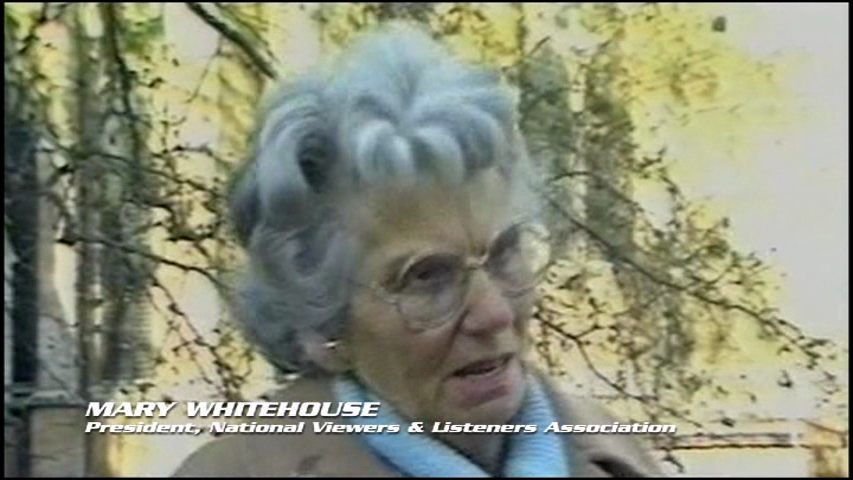 It isn’t all talking heads, however, and West does a fine job with contextualizing the era with recollections from actor Andy Nyman and directors Christopher Smith (SEVERANCE) and Neil Marshall (DOOMSDAY) who talk about the joys of renting the most lurid movies they possibly could at the time. West also serves up plenty of archive footage from new broadcasts and talk shows, allowing the Nasties’ leading instigator, reactionary Christian advocate Mary Whitehouse, to show off her case and hypocrisy despite her having passed away in 2001. West even allows for some nice touches, like distorting the look of the film when the interviewee discusses how the poor quality of the product made it seem so much more “real.”

But this 72-minute documentary, while hugely informative and well-made, is only a small chunk of the 13 hours (!) worth of material within the package to devour. The two additional discs each include a close examination of the 72 films (divided between the prosecuted and non-prosecuted, organized alphabetically) featuring the same interviewees from the documentary discussing the quality of the films themselves and how they ended up on the “banned” list. (examples) Even better, the discussions are complimented by trailers for the films, an especially entertaining effect when the interviewee has just spent several minutes mentioning how duplicitous the trailer is. It’s an amazing roster of films, analysis and trailers, comprising nearly eight hours (you’ll want to clear a weekend) of content that easy could have been 72 episodes of a particularly well-made web series. 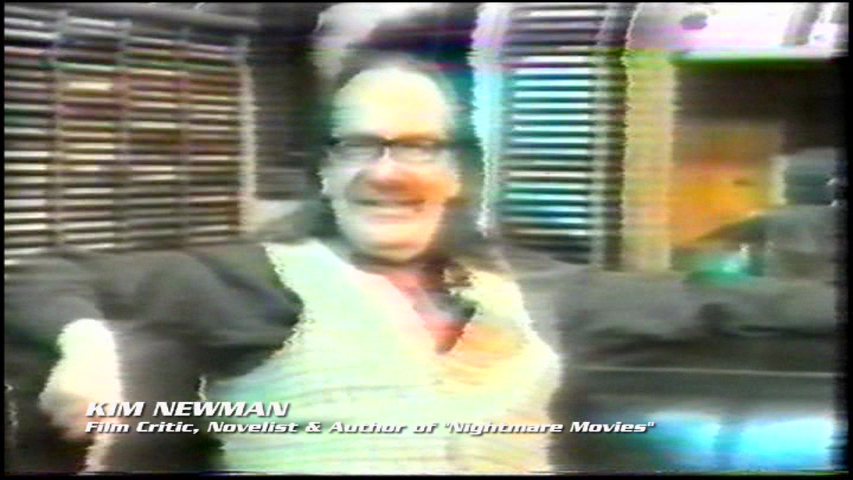 If hearing Kim Newman talk about BAY OF BLOOD or Stephen Thrower talk BLOOD FEAST isn’t enough for you (and hearing them talk about the films is even better than reading the work — any time DON’T GO IN THE WOODS can be dismissed as “clod-hoppingly inept” is a cause for gleeful rejoicing), you can choose to just view the trailers as well, making this a trailer collection that can’t be beat.  The package is rounded out with several collections of video covers and the “Video Indent-a-Thon,” featuring nearly an hour of video company identification labels, and while these won’t hit the same nostalgic notes to U.S. viewers as they undoubtedly did in the U.K., it’s still an entertaining and fun bonus.

“Definitive” is in the title itself, and that attribute is no understatement. A fascinating look at the golden age of home video and the controversies that rose from its prominence, the only reason that you shouldn’t pick up Severin’s new release of the package (holding out for a Blu-ray version seems rather pointless – there’s no reason for the film to look better and in some cases, the films depicted are as memorable as they are because they looked significantly worse) is that you already own the Nucleus release. This is easily one of this year’s must-own sets, and nobody with an interested in horror history, VHS or censorship in general should do without it.