Home  ⁄  The Wire  ⁄  TWIN PEAKS Is Not The Sum Of Its Parts; The Focus Is The Parts

WARNING: I’m going to spoil not one, but SEVEN series finales in this piece.

Writing a satisfying ending is tough. Stephen King—a premiere storyteller—has been whiffing on the endings for years. His tales are so well written, though, that he does seem to get a pass on the conclusion. Even some of the best Twilight Zone episodes have a sense that Serling got so far into the story, didn’t know how to wrap it up, and simply wrote “and it was all aliens. The End.” However, no matter what happened through the course of a story, an ending that is considered lackluster can be perceived as a cop-out, lazy writing, or even cause an audience to turn on the author. All that being said, audiences tend to put too much stock in how things end when it really is the journey that counts. Sunday night’s Twin Peaks finale appears to have fans split: some are calling it a perfect ending to a David Lynch masterpiece, while detractors are calling it a major disappointment. In this era of hyperbolic criticism where everything is either amazing or horseshit, allow me to offer up this opinion.

Now, perhaps my Twin Peaks fandom may come into question; I don’t have a cherry pie tattoo, don’t own any enamel pins, and I don’t recall ever sharing a gif of Audrey Horne dancing. That said, I did religiously watch the show when it reran on Bravo in the ‘90s. Every day before I rode my bike up to the coffee shop (my first job) for the afternoon shift, I would tune in for the newly shot Log Lady intros. As a film-loving teenager who always saw himself as just a little weird, I dug it. It informed my love of slim black suits and slicked down hair, and I even purchased at mini tape recorder to emulate Dale Cooper.  I approached the third season with caution, and early on pondered how Lynch and Frost would retool their soap opera riff for the prestige era: would they subvert cliffhangers, or slyly parody the self-seriousness of the fans of Games Of Thrones, Mad Men, and Breaking Bad? In the wake of the final episode, Matt Marone, senior MLB editor at ESPN, tweeted that “Twin Peaks did fan service but also flipped the bird to fan service. The original lampooned soap opera. This crushed revivals & nostalgia.” Those final words echoed in my noggin…

While I don’t believe tweaking nostalgia happy fans was Lynch and Frost’s entire reason for coming back was to finish off Twin Peaks, I think that it was a vital component in the third season. Simply look to episode 16: Fans are treated to the Audrey Horne dance that they fell in love with through gifs, and then Sherilyn Fenn’s character is cast away to a bright white hell never to be heard from again. That is a shrewd, very amusing business. As far as those final moments between Coop and Carrie, I can’t say what it all means, but hasn’t everything in Twin Peaks always been up for debate? Nobody at the water cooler during the show’s original run told anyone “don’t @ me.” In its original iteration, the creators stated that they never wanted to solve the murder of Laura Palmer, that her death was simply a MacGuffin to bring all the weirdo denizens of Twin Peaks together. They only solved her murder due to pressure from the network—the same network that prided themselves on keeping audiences in the dark with Lost over a decade later. With that in mind, did Lynch and Frost ever plan to deliver a satisfying ending? Did they even have it in them? 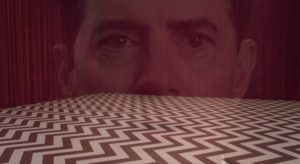 I would argue no, they never intended to, and that Twin Peaks doesn’t need a satisfying conclusion to be a fulfilling experience.

There is too much stock put into the final episodes of long-running shows. Do you know what the last episode of The Brady Bunch was? It was the one where Greg dyed his hair orange using Oliver’s hair tonic just before graduation. There was no wrap-up, no night of finales, no tearful goodbye; The Brady Bunch simply stopped. Arguably, it wasn’t until “Goodbye, Farewell, and Amen,” the final episode of M*A*S*H when the end of a successful television run became a big deal—and big business. CBS was selling 30-second advertising blocks for more than NBC was for that year’s Super Bowl. Arguably the first “controversial” series finale came on May 25th, 1988 when it was revealed that the entire six-year run of St. Elsewhere took place in the mind of an autistic child. The ending feels less like a cheat, and more like a button on “The Last One,” after wrapping up the show’s character arcs.

The Breaking Bad series finale may be the gold standard of denouements in the golden age of television.  Series creator Vince Gilligan had an endgame in mind when he began concocting the rise and fall of Walter White. He wanted to watch Mr. Chips turn into Scarface, and he knew how Walt’s arc needed to wrap up, it was a matter of getting there. While Breaking Bad is a fantastic journey—a combination of a crime thriller, family drama, and a comic book sensibility—nothing short of a slam-bang conclusion would appease fans. Breaking Bad is possibly one of the few television shows that ended almost exactly how the audience predicted—and wanted—the story to conclude, with Walt saving Jesse and taking one more victory lap before he finally expired.

And it was extremely satisfying.

Meanwhile, possibly my favorite television show of all time Mad Men, took a different approach to the prime time drama. Matthew Weiner’s look at advertising in the ‘60s never relied on big cliffhangers or shocking moments like Breaking Bad or Game Of Thrones, but rather focused on complicated characters, their interpersonal relationships, and aesthetics. On the eve of the finale, I was never concerned where Weiner was going. I trusted him as the show’s creator not to turn in a cop-out conclusion, but I also knew that it didn’t matter. The journey of Mad Men was enough for me. It was a show that felt very real, very authentic, and if the conclusion was just another day at McCann-Erickson, it would have felt very in tune with the rest of the series. Of course, Mad Men did provide viewers with a very satisfactory conclusion with Peggy working her way to the top and Don Draper finally getting a big—if not the biggest account of all time.

But it didn’t necessarily need one.

Whereas Breaking Bad was all about the story, and Mad Men was all about the characters, Twin Peaks is very much all about ideas, concepts,  the tone, and the David Lynch aesthetics. Lynch and Frost did create iconic, memorable, characters, but so much of their personality came from the world around them. The third season was chock full of beautiful Mid-century modern furniture, beautiful women with skinny necks, art-school horror imagery, long takes, and sequences best described as bonkers. Twin Peaks is a series that’s very much all about the journey.  It could be argued that Twin Peaks is all aesthetics: that Lynchian sense that is a derives from the director’s interest in transcendental meditation, absurdist comedy—Lynch himself has two of the funniest moments in the series: smoking with Diane and replying to Albert’s comment about “going soft,” “Not where it counts, buddy”—and the ultramodern, retro Americana vibe (diners, saddle shoes, and romantic pop music) that permeates Blue Velvet as well as the  original Twin Peaks. Twin Peaks is not necessarily the sum of its parts. The focus is the parts.

In the era of binge-watching, there’s a reason why Lynch opted to release his series week to week: he wants his audience talking about it, dissecting it, and poring over every detail. It never mattered where it ended, because David Lynch never cared himself. Lynch—with the assistance of Frost—took Showtime’s money and made what adds up to David Lynch’s Dark Tower: a sprawling arthouse tale replete with nods to all his previous work, from the oft-overlooked TV series On The Air, to Eraserhead, to Wild At Heart, to Mulholland Drive…and those are just the ones that I spotted.

The Twin Peaks finale actually resembles the controversial Sopranos finale in a major way. In “Made In America,” the real conclusion of The Sopranos happens halfway through the episode when Phil Leotardo is shot and killed before his head is crushed by an SUV. This leaves Tony Soprano, for all intents and purposes, victorious for the moment, but as the final scene in the diner makes clear, Tony will live the rest of his life in fear that the next person through the door will shoot him dead. Halfway through the two-hour Twin Peaks finale, Bob is defeated by a kid with a Hulk glove—in David Lynch’s version of a spectacular final battle—and Cooper attempts to rewrite history by ensuring that Laura Palmer is never killed (I think). The remaining hour is a coda, perhaps implying—much like Tony Soprano—that Coop is cursed to an existence leaping in and out of bodies, trying to save Sheryl Lee…maybe? David Lynch was never going to end Twin Peaks with a retro-cool pop song or a Coke jingle. That’s just not David Lynch.

But who really cares how it all ends? I’m not even sure David Lynch and Mark Frost do. They created a weird little world that people love to visit and will continue to revisit. The ending of Twin Peaks will be debated for years to come, but even if one finds it disappointing, the series will always be held near and dear to many a weirdo. Nip/Tuck is a show that let me down in its final episode (come one, Sean and Christian should have wound up getting married) but that doesn’t mar my adoration of the show as a whole. Some fans would have preferred Twin Peaks ended when Coop told Laura Palmer “We’re going home,” and that’s cool. Death of the author allows it. I prefer to have Nip/Tuck end with Sean and Christian moving to L.A.

Twin Peaks was a wonderfully weird—and damn good—a slice of pop culture phenomenon and no matter what your thoughts on the conclusion are, arguably it was summed up best by F.B.I Director Gordon Cole himself.

“Albert, I hate to admit this, but I don’t understand this situation at all.”