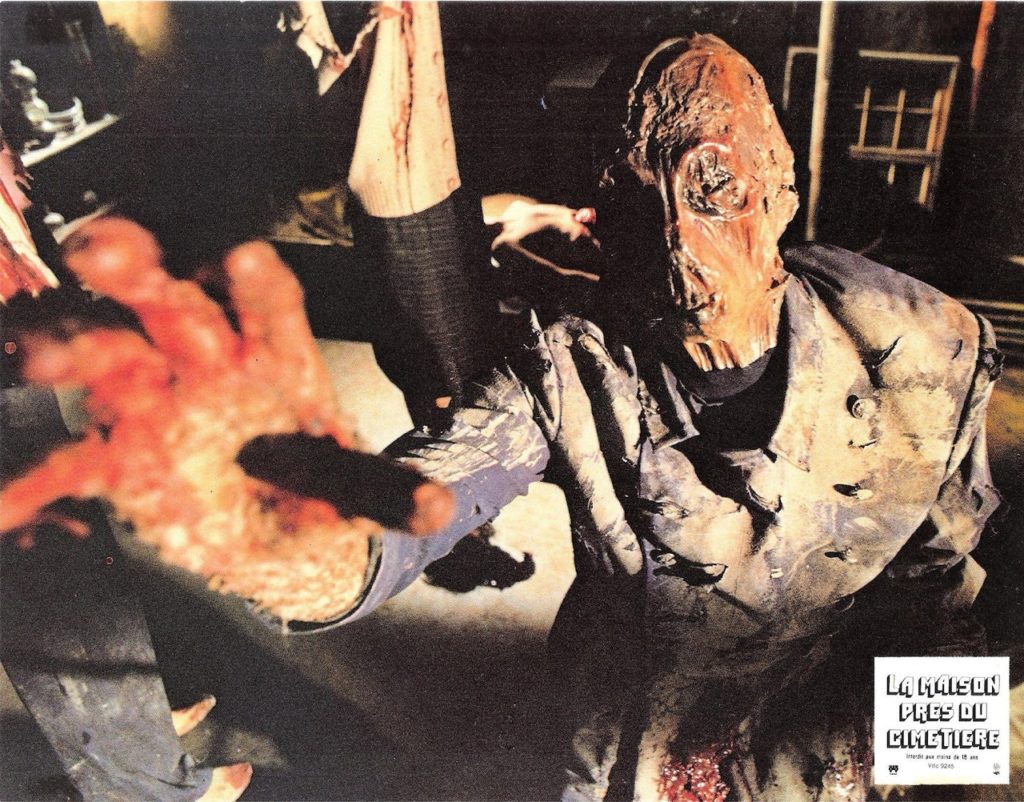 Title: THE HOUSE BY THE CEMETERY

Scissors to the chest

Knife to the skull 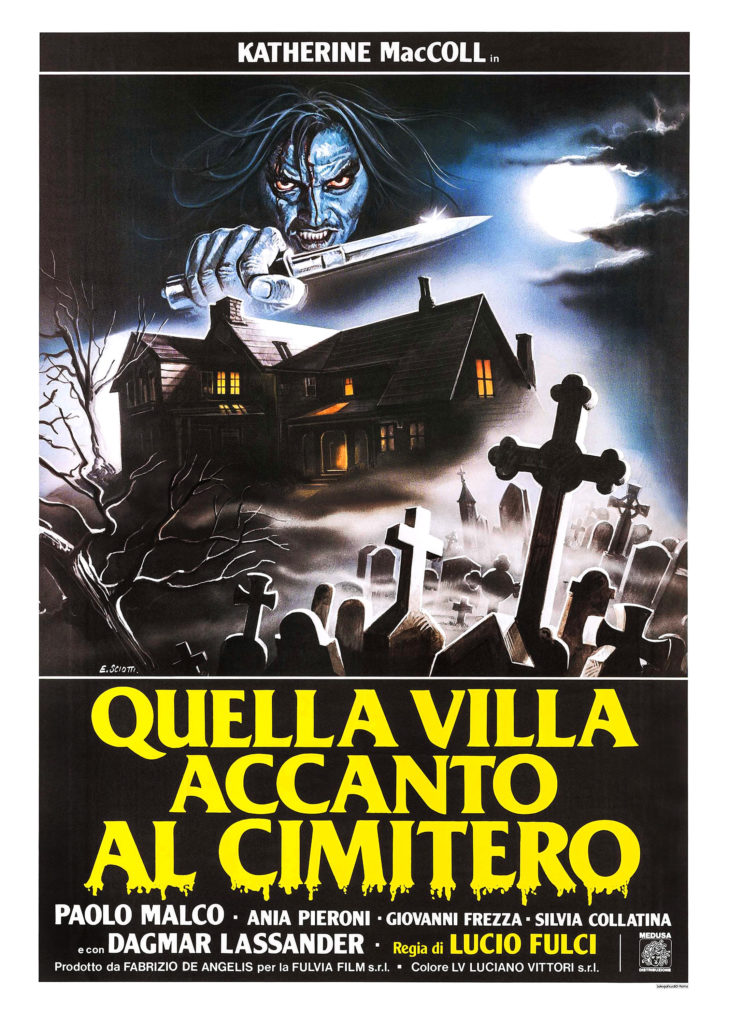 The genre map has been marked all over by Lucio Fulci. He’s done Westerns (FOUR OF THE APOCALYPSE) and giallos (A LIZARD IN A WOMAN’S SKIN), but it was his efforts in the horror genre that garnered the ire of the BBFC in the UK. With his Gates of Hell trilogy, Fulci packed his films with shocking bloodshed that left more conservative audiences questioning the suitability of his films for home viewing. The final installment of Fulci’s “Gates of Hell” trilogy came about in 1981 when he brought forth his gory classic THE HOUSE BY THE CEMETERY.

In Fulci’s spiritual sequel to CITY OF THE LIVING DEAD (1980) and THE BEYOND (1981), there again lurks something ghastly and violent within a serene earthly setting. This time the basement of a New England home is the dwelling of a gruesome presence which makes itself known to all whom enter. When the Boyle family (Catriona MacColl, Paolo Malco, Giovanni Frezza) moves into the home, they begin to experience strange occurrences and their son starts communicating with a long-dead child.

THE HOUSE BY THE CEMETERY acts as a more intimate complement of THE BEYOND, in that they both concern houses concealing pure evil within their lowest chambers, and a secular human who gains access to an otherworldly realm. Here, the horror is concentrated to a single setting and lacks the last stand against zombie hordes.

The majority of the film’s dialogue (with the exception of the two children who spoke Italian) was performed in English but was still dubbed in post-production, adding to an uncanny dreamlike quality that the movie carries throughout. The dubbing does not lessen mass audience disdain for young Bob, played by Giovanni Frezza. Delivering a steady slew of pithy mewlings with a choirboy falsetto, little Bob is the film’s most memorable character for the worst reason. However, he bears a believable sense of fearfulness when necessary; a climactic scene has his mother Lucy being separated from him by a nasty ghoul, her head thumping on every step as she is dragged away down the stairs. The camerawork in this scene effectively maximizes the terror as it thumps (as his mother’s head does) down each rickety wooden step, descending away from his tear-streaked face as he reaches out towards the camera. Considering his notoriety for shock-and-awe butchery, it’s a testament to Fulci’s abilities that the most fear-eliciting moment occurs in a bloodless scene.

As with most Fulci films (particularly in the last decade of his filmmaking career), the plot meanders toward the nonsensical. The killer is a decades-dead doctor who has shriveled decayed eyes and, in other scenes, delicate little hands and bright glowing eyes. A bushy-browed housekeeper, Ann (Ania Pieroni) seems to exist in the film purely to confuse viewers. She does everything from nonchalantly cleaning up blood after a messy death scene with no questions asked (even weirder is when the lady of the house witnesses this and doesn’t notice the blood-smeared floor at all) to having intense staring contests with the patriarch of the Boyle family, leading to nothing. The mother, Lucy, has an odd disconnect from the entire world around her wherein she doesn’t get acknowledgment from most of the people she encounters.

But this is Fulci, which means an emphasis on the feel of the film rather than its logic. Like Argento, Fulci largely disregards dialogue and connected narratives in favor of employing imagery to manipulate emotions and extract fear from audiences. In fact, the opening credits of the film are dominated by image and gaze as a motif. Young Bob, framed aside a mirror, stares wide-eyed at a still gallery photo of a scared young girl (who turns out to be dead) who warns him not to come to the house. Bob’s mother cannot see the girl in the image, thus showcasing Bob’s “second sight” into the supernatural. Exactly what is being said about sight is left for viewer interpretation, but there is definitely an ordered thread or two embroidered within the chaotic plot web of screenwriters Fulci, his collaborator Dardano Sacchetti, and Sacchetti’s wife Elisa Brigante.

Walter Rizzati’s striking musical score stands out (his only score for a Fulci film), capped by “I Remember”, a mesmerizing theme with cadenced percussion that recalls to mind the likes of Goblin. It sets the morbid tone that characterizes all of Fulci’s endeavors.

The film opens with a bang, with a young woman killed off in the first few minutes. A knife plunges through the back of her head with the tip protruding through her mouth. The gore doesn’t end there; as her body is being dragged away it leaves a slug-like trail of crimson body fluid across the floor. From there until the third act, the movie remains relatively bloodless, but it’s easy to see why this film fell afoul of the BBFC. A woman is stabbed multiple times including once in the throat with bright red blood spurting skyward, leaving droplets on her face. Her death was initially supposed to include an eye-gouging (a Fulci film staple), but the effects didn’t satisfy Fulci enough for the extended footage to make the cut. Still, special effects artist Giannetto De Rossi (CANNIBAL APOCALYPSE) put in serious work on the film. Later, a man’s throat is ripped out in slow-motion and given an up-close look at the viscera flowing from the gaping hole where his trachea used to be. Like its Gates of Hell predecessors, THE HOUSE BY THE CEMETERY does not shy away from carnage.

THE HOUSE BY THE CEMETERY was marred with opposition from the beginning. It was edited for theatrical release in the UK; a decapitation scene and the poker kill scene were cut down, 34 seconds of footage total. Nevertheless, the same print of the film was still successfully prosecuted under the Obscene Publications Act of 1984 and banned until 1988 when Elephant released a version of the tape with the 34 seconds of footage cut, plus an additional four minutes and eleven seconds of bloody mayhem edited out, including the first stabbing, the bat attack, a throat ripping and tracking shots of dead bodies. The 1992 release of THE HOUSE BY THE CEMETERY has a whopping seven and a half minutes of cuts by distributors, but the 2001 Vipco version finally did right by Fulci’s film and restored all but 33 seconds of the offensive material. Arrow’s 2009 unrated DVD finally put the film out in all of its gory glory. These days, Blue Underground’s blu-ray (with a new 2K transfer) is a coveted version of the film.

As a bonus, THE HOUSE BY THE CEMETERY also features one of the most entertaining theatrical horror trailers ever, with a Vincent Price-like narrator warning, “Read the fine print. You may have just mortgaged your life!” 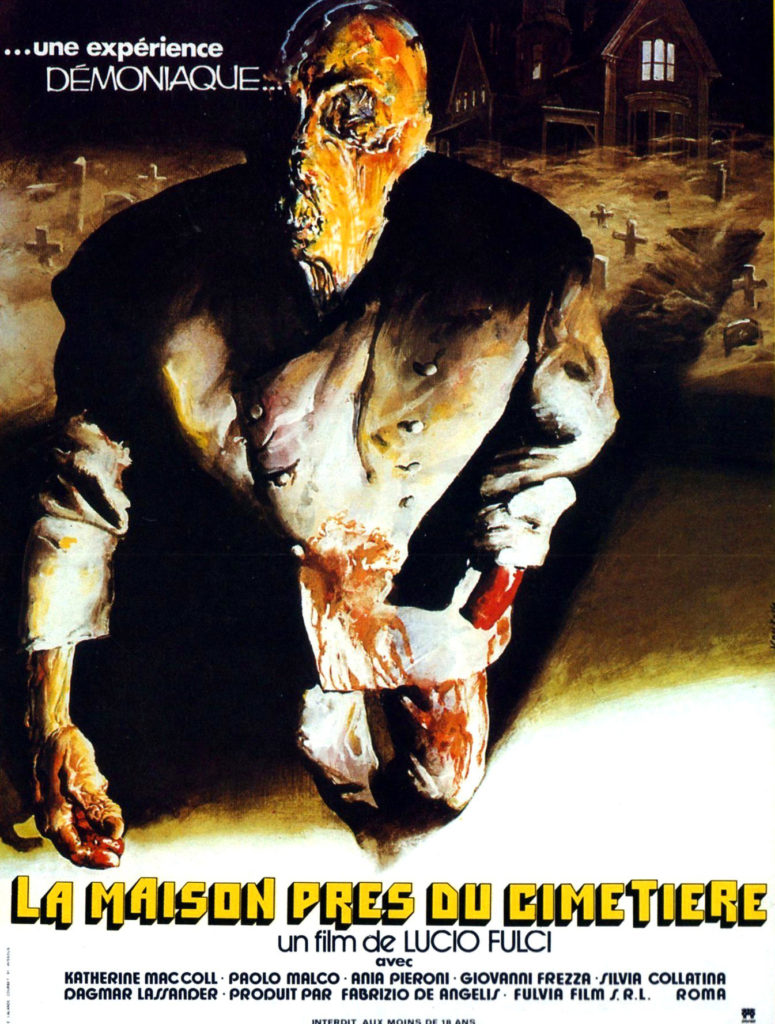 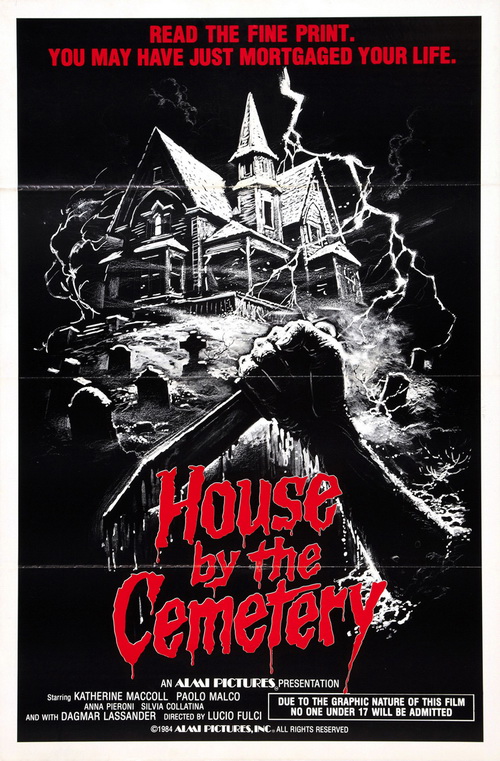