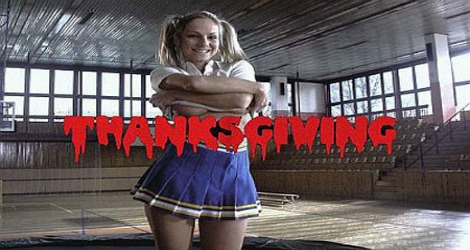 I could watch every one of the GRINDHOUSE trailers turn into feature length projects. Those fuckers were jam packed with cool and the talent to back them up. MACHETE is becoming a franchise, HOBO WITH A SHOTGUN continues to build a massive following, and I keep hearing Rob Zombie’s WEREWOLF WOMEN OF THE SS is going to go full length soon. Next in line however is Eli Roth’s THANKSGIVING.

Roth talked to Behind The Thrills about his Goretorium haunted attraction and spilled some stuffing on the project.

“Dude, it’s gonna happen. I’m working with the CLOWN writers on it. We have a call scheduled for tomorrow afternoon. Jeff Rundell, my co-writer and I have a very extensive treatment. We finally cracked the story and how to make it really really scary, and the reason to do it, and I’m really excited about it. So the CLOWN script was one of the best scripts I’ve ever read, and we’re like ‘before Jon [Watts] shoots CLOWN, he has a window.’ Chris Ford, who’s movie ROBOT & FRANK just opened… Chris and John are going to write the screenplay with me and my partner Jeff, so we’ll have a screenplay soon.”

SOURCE: BEHIND THE THRILLS