The movie opens with a shot of a luxury convertible driving along a winding mountain road, then cuts to a close up of the spaced out looking Elizabeth (Abbey Lee) in the passenger seat staring at the passing scenery. Henry (Ciarán Hinds), her much older husband, drives, looking very satisfied with himself. The glamorous lifestyle-porn look and feel of the moment is straight out of a pretentious perfume ad even before Elizabeth’s pulpy romance novel voiceover: “I dreamt I met a brilliant man. I would steal his breath away. And he in turn would steal me away from everything ugly, into a secret world of our own.”

That arch, tongue-in-cheek tone continues as the newly married couple arrive at their huge, secluded, modern home. Elizabeth is introduced to the housekeeper Claire (the great Carla Gugino, pulling off a quite good British accent) who observes Henry carry his new bride across the threshold with a raised eyebrow. Oliver (Matthew Beard), Claire’s young, blind assistant, speaks moonily to Elizabeth about flowers, while she observes him with wide-eyed, childlike curiosity. Clearly, nothing sinister is going on with these two.

Henry gives Elizabeth the tour of the home, revealing to her a massive closet full of stylish clothing, a large display case of jewelry, a safe full of money, and a private art gallery. Each room that contains anything valuable is closed and locked using technology that reads Henry’s thumbprint. This, of course, includes the front door. Henry explains to Elizabeth that all of the doors are also set to read her thumbprint and open for her—even the door in the creepy basement that he tells her she must never enter. Did you get that, Elizabeth? Even though you have been given the ability to do so, you must never ever, no matter what emergency should force your hand, open that door! Okay?

Of course, the next day, when Henry leaves to attend to business, Elizabeth enters the forbidden room and discovers a very disturbing experiment that Henry is conducting. From that moment on, ELIZABETH HARVEST goes off on loopy plot twists and disrupts the expected measured pacing of this type of film as Henry is revealed to be a machete-wielding nutter and Claire and Oliver are shown to not be the household help that they clearly never were before the first act is even over. To reveal any more of the plot twists would spoil the fun—even though none of the twists are that surprising.

Writer/director Sebastián Gutiérrez is not interested in coming up with original or surprising twists so much as he seems to want to satirize the hysteria that marks the third acts of film adaptations of tragic Gothic romances like REBECCA and WUTHERING HEIGHTS by bringing that breathless, absurd energy large and loud to the surface from roughly the twenty-minute mark all the way to the end. To do so, he relies on a ridiculously over-qualified cast (seriously, Hinds and Gugino are way above this sort of thing, but at least they look like they are having fun) and a script that veers from bodice ripper erotica to bloody slasher flick to sci-fi to kitchen-sink dysfunctional family melodrama before repeating the cycle all over again. In the midst of this chaos, Gutiérrez switches protagonists from Elizabeth to Oliver to Claire and back to Elizabeth. It is all very silly and funny and entertaining, but it also starts to wear on the nerves after about eighty minutes.

Gutiérrez stretches ELIZABETH HARVEST out to thirty minutes longer than it needs to be with would-be artistic flourishes that add nothing to the film. I suppose the redundant expositional scenes that are saturated in post-production primary color tinting to the point of over-kill and the inclusion of a lascivious police detective (Dylan Baker) that adds nothing but an unnecessary second act plot hole could be seen as the veteran director satirizing a younger generation of filmmakers raised on hyper-stylistic, yet empty genre flicks. But even if that is the case, it is hard to justify how much of a drag such indulgent touches become on the film. The constantly swooning tone of the dialogue and absurd touches to the characters such as blind Oliver’s skill with a rifle and Claire’s out-of-left-field heart condition are entertaining enough without the inclusion of the extreme visuals. 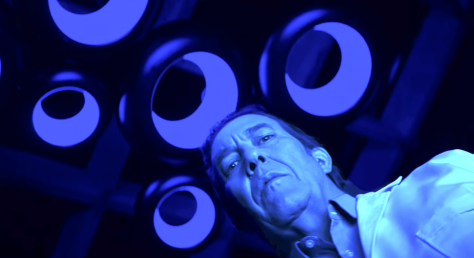 Even though the film eventually overstays its welcome and leans too hard into unnecessary over-the-top visuals, the batshit crazy nature of the screenplay, the performances, and the way it is executed through the first two acts makes ELIZABETH HARVEST well worth checking out. It’s frothy, goofy, sexy, genre-bending fun.

ELIZABETH HARVEST is now available on Blu-ray from IFC Midnight and Scream Factory. 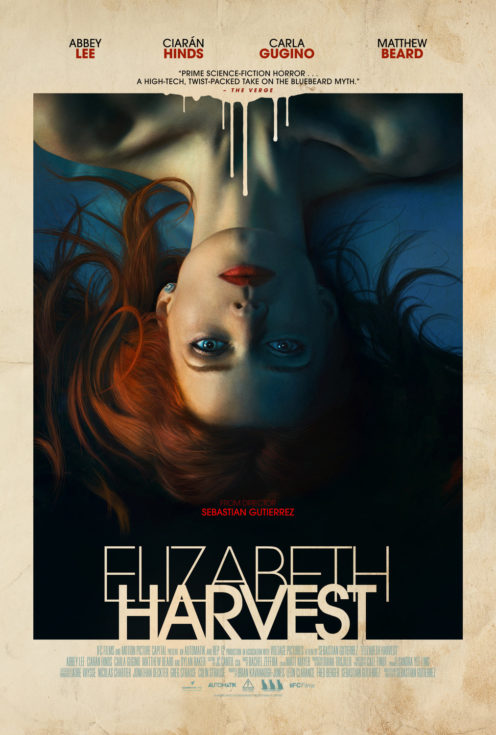