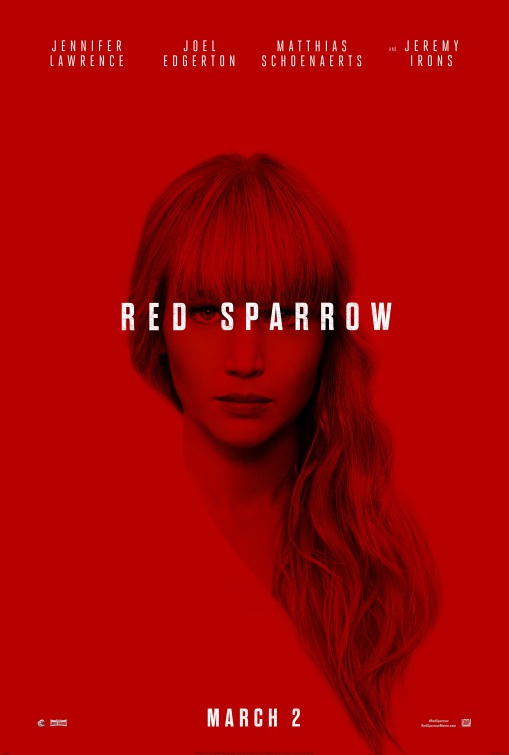 Seemingly taking place during a sort-of Cold War 2.0, director Francis Lawrence (best known from his work on THE HUNGER GAMES: CATCHING FIRE and MOCKINGJAY) helms the newest spy thriller from 20th Century Fox, RED SPARROW. While being easily comparable to last year’s ATOMIC BLONDE, RED SPARROW is far from what I would consider to be an action film, but rather a film that relies so heavily on character relationships and dynamics – maybe to a fault. With a narrative filled with an immense amount of deception, and not nearly enough narrative clarity, RED SPARROW is an intellectual piece turned frustrating, as the film seems to be a puzzle demanding to be solved, but we haven’t been given any pieces.

Based off the novel by Jason Matthews (a former CIA agent who apparently allows the authentically brutal life of a spy into his writing) RED SPARROW is adapted for the screen by Justin Haythe. Haythe’s screenplay proves to be the weakest part of the film, as its convoluted storyline and its unnecessarily overlong length attempts to drag the technical beauty of the film down with it. We meet Dominika Egorova (played by a dedicated Jennifer Lawrence), a prima ballerina for the Bolshoi, described simply in the opening sequence as “the pride of Russia.” Ms. Lawrence – her naturally high cheekbones framed by picturesque bangs – sells her Russian character mainly accessible through her refined and never-overplayed accent. After a catastrophic onstage injury, Dominika is removed from the ballet company and will soon be removed from her company-supplied apartment and the medical care for her deteriorating mother (Joely Richardson). Up against a tough situation, Dominika is approached by her (creepy) Uncle Vanya (played by Matthias Schoenaerts, whose sex appeal takes a blow from this role), who offers financial support to her if she is willing to execute a covert mission for the SVR, the Russian intelligence service. This mission of course goes wrong, ends in a murder, and Dominika, a witness to the murder, is given a choice between death or fulltime work for the Russian government. 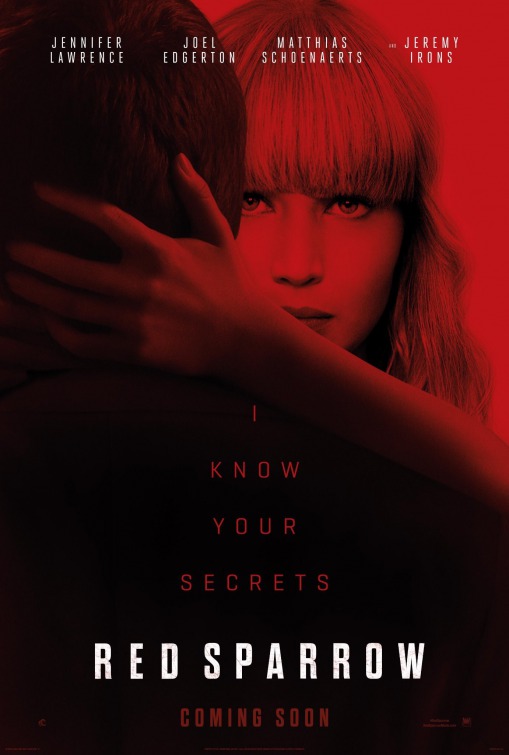 Choosing the latter, Dominika is sent to the “Sparrow” program, a program designed to train young recruits (both men and women) to use their bodies for both mental and physical manipulation. “Your body belongs to the State!” (spoken by Charlotte Rampling’s Matron, the stern and stringent professor-of-sorts of the Sparrow program) is the main principle of a Sparrow’s line of work – and admittedly it’s a problematic one. Whether the film is suggesting that sexual desensitization is a form of liberty and strength, or if it’s exploitative and objectifying, is not necessarily apparent – and I predict that this will not sit well with audiences. Dominika is soon assigned to Budapest to track down and “befriend” United States CIA operative Nate Nash (played by the always on-point Joel Edgerton) in attempt to fish out the name of the Russian mole that Nash has been protecting for years. This plan unfortunately fails for Dominika as Nash catches on to her antics and figures out she is a Russian Sparrow. From here, RED SPARROW continuously poses the question: who is spying on whom? This concept is at least a little fascinating, thus offering the film a fair amount of intrigue, but ultimately its asked one too many times resulting in a movie watching experience that is more taxing than it is enjoyable. With little to no clues woven into the narrative, Justin Haythe’s screenplay seems to box the audience out, not allowing any access to the under-workings of the characters until the very end. Because of this, RED SPARROW feels weightless and inconsequential – which is both frustrating and ironic given that the technical aspects of the film are superb.

Even with it’s disorganized narrative, RED SPARROW has irrefutable achievements in front and behind the camera. Like we know her to do so well, Jennifer Lawrence gives one of her most dedicated performances to date. Whether she is channeling sentimentality for her character’s mother, or crawling through a pool of blood, Lawrence disappears into her prima-ballerina-turned-spy role. Lawrence has welcome company on screen from Joel Edgerton, and while their relationship isn’t necessarily written perfectly, Lawrence and Edgerton share immense chemistry in their scenes, proving to be a strong pairing and great casting. Veterans Jeremy Irons, Charlotte Rampling, and even Mary-Louise Parker (in a scene that feels wildly out of place), hold their own, each offering strong performances – sadly all much better than the material they are given. Director Francis Lawrence stays tremendously dedicated to scenes of intense violence or intimate sensuality. Without getting into spoilers, its safe to say that Mr. Lawrence’s commitment to these brutish scenes will both shock and disturb audiences – and its even safer to say that this type of storytelling is both ambitious and commendable, even if it might not work for everyone. 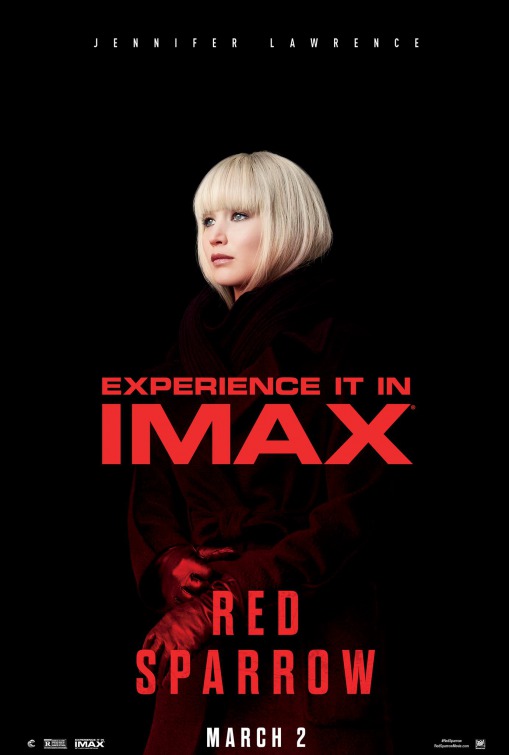 The cinematography by Jo Willems is more artistic than anything he has ever achieved in the past, utilizing deep reds to accentuate the mood and themes of violence and beauty. Willems favors the use of wide-angle lenses and strong uses of negative space within the composition to not only establish a consistent style, but also to contribute to the shared uncomfortability and unease between Lawrence’s Dominika and the audience. Paired with a wicked and understated score from James Newton Howard, RED SPARROW is boasting itself as a gorgeous piece of visual art – a platter that is too beautiful for a dish like Justin Haythe’s script to be served on.

The messy, chaotic, and frustrating story of RED SPARROW does not live up to its technical achievements in performances, visuals, score, and editing. It’s frustrating to know that RED SPARROW could have been much better given a shorter running time and a more concise script, but instead it’s a film that doesn’t quite know what it is, or what it wants to be. It’s hard to define the thematic purpose this film has to offer, other than to be the first of presumably many neo-Russophobic genre films in response to the current political climate. 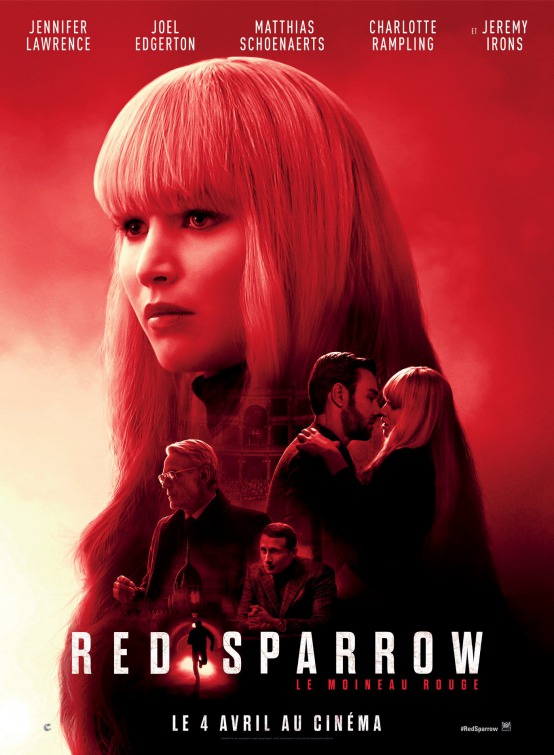