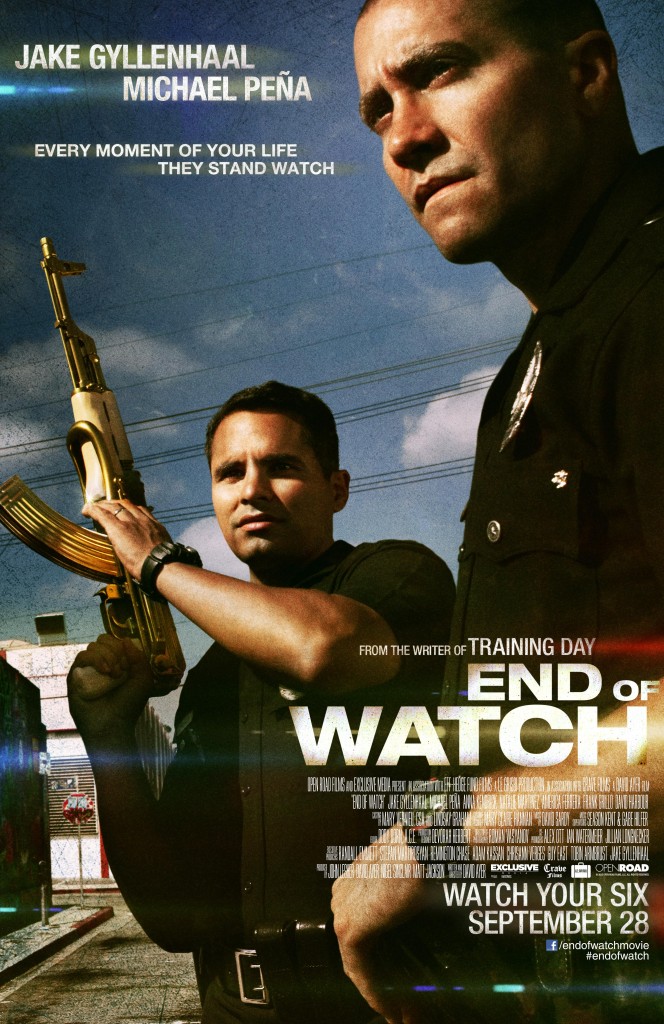 William Friedkin has suggested that END OF WATCH “may be the best cop film ever.” William Friedkin directed THE FRENCH CONNECTION. My work is done here. Go check it out. But if you need more prodding, read on…

Although I wouldn’t go so far as to call END OF WATCH the best cop film ever – although who am I to disagree with a great filmmaker? – it is certainly rare among cop films in that it really does get as close as possible to the sense that policework is a difficult, disorienting job which must wreak havoc on the emotions of the men and women who carry it out. Sometimes it’s the dullest of drudgery and sometimes it’s a matter of life or death, and you never know which call is going to be which.

END OF WATCH was written and directed by David Ayer, who made his name with his terrific script for TRAINING DAY. As a director, he’s since made HARSH TIMES and STREET KINGS, both of which have notable moments but not enough to add up to greatness. (HARSH TIMES has a committed performance by Christian Bale but feels a bit too much like RETURN TO TRAINING DAY, while STREET KINGS has a promising scope but is almost uniformly miscast.)

Nonetheless, Ayer is a writer and director whose work I follow, hoping every time he’ll deliver on his formidable promise. Ayer is working in a very specific neo-noir movement that includes FX’s THE SHIELD, Michael Mann’s COLLATERAL, and Will Beall’s novel L.A. Rex. What unites these works are a distinct sense of texture and detail – the heat and the grit and the palm trees and the asphalt – this is the real Los Angeles, kids, and it ain’t made for those pussies on Entourage. The real Los Angeles is somewhere between what you see on TV and what you see in END OF WATCH – on one block, you could be in a trendy, gentrified neighborhood, but turn the corner and you might not want to be there when the sun goes down. David Ayer is one of the few filmmakers who knows how to depict this aspect of Los Angeles.

Jake Gyllenhaal plays against type as Officer Brian Taylor, a beat cop who is taking a film class after hours and so is filming his daily routine with a small recorder for a class project. 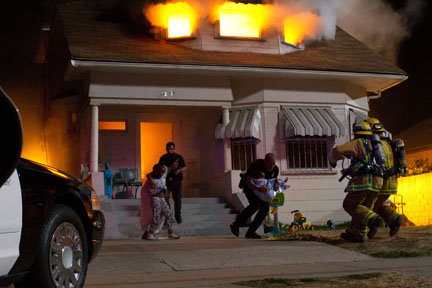 Sidebar: Nobody told me going in that this was going to be a found-footage movie. It’s an unusual approach, and quite frankly something of a problematic one in this case. The found-footage genre usually brings with it – to me, at least – a distancing effect, rather than the suspension of disbelief and the empathy that comes with more conventional narrative. Film found-footage movies at all times remind you that what you are watching is being filmed, which makes it that much harder to get into the characters. Besides that, END OF WATCH backs off the found-footage conceit as suits it – I wouldn’t call it “cheating”, but it’s certainly not as consistent or seamless as recent found-footage movies like TROLLHUNTER or CHRONICLE that are better at maintaining reasons for the cameras to be rolling, without venturing to third-part cameramen which, again, remind us that this is only a movie. END OF WATCH is a movie that breaks its own rules, which is the main reason I would hesitate to call this otherwise affecting film “best of the year” material. The stylistic choice makes scenes like the harrowing opening sequence, a traffic chase that ends in a crushingly realistic shooting, but it also means it takes longer to warm up to the characters.

It helps that the pair of lead actors bring so much to their roles. Jake Gyllenhaal gives an impressive performance as a smart and deceptively sensitive officer who might once have chosen another career than cop, but now that he’s in it, has built up a tough shell of self-protection. Gyllenhaal is shaved bald, which honestly gives him a somewhat sickly appearance, but that contributes to the sense that this is a dangerous world we’re riding along in. His every encounter, even with those he loves best, has a sense of tentativeness that suggests he doesn’t want to get too close.

As solid as Gyllenhaal is in END OF WATCH, though, it’s really Michael Peña’s movie. Michael Peña is the kind of actor who’s been really good for a really long time, and it’s nice to see him get to really dominate a movie. He had a small role on one season of The Shield (as Shane’s partner), and regardless of what you think of 2006’s CRASH he was the best thing about it. He completely stole 2009’s incredibly-overlooked OBSERVE AND REPORT, and now he’s stolen this movie away. Peña has a winning, soft-spoken-yet-fast-talking manner; he’s like Mark Ruffalo divided by Aziz Ansari. As Taylor’s partner Mike Zavala, his brotherly ribbing of Gyllenhaal’s character is the movie’s constant highlight. His scenes with his young wife (played by relative newcomer Natalie Martinez, a major-league charmer) are recognizable and touching. Those are all the more appreciated after the offbeat and often-shocking violence which Taylor and Zavala witness (and participate in) every day on the job.

And when I say this movie is shockingly violent, I’m not kidding. END OF WATCH has an intriguing story structure – it’s almost episodic, occasionally so much like the TV show COPS that the characters indirectly reference it – which balance the officers’ home lives and office lives with the occasionally unthinkably brutal experiences out on the streets. There are straight-up horror-movie scenes in this movie. One scene shocked even me, and I’ve seen a lot. (You’ll know it when you see it.) 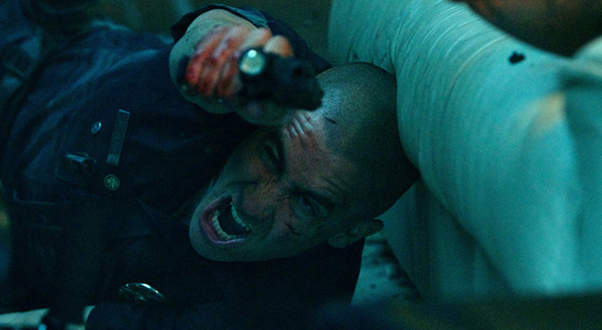 END OF WATCH isn’t a perfect movie. For one thing, there isn’t enough of Frank Grillo, a veteran character actor who made such a huge impression over the past year or so with roles in WARRIOR and THE GREY. And the character played by Anna Kendrick, as Taylor’s love interest Janet, is underdeveloped to the point where I have to assume there are scenes on the cutting room floor that show some consequence to that brief interlude where Janet handles Taylor’s firearm. This scene provoked the audience I was in, and seems to warrant a follow-up scene that never happened. Lastly, some of the music cues are rather uninspired, including Cam’Ron’s ten-year-old “Hey Ma” and Mazzy Star’s “Fade Into You”, an admittedly great song that has been so over-used by TV and film that it’s been in movies as out-there as STARSHIP TROOPERS. But maybe that’s a virtue after all – these characters aren’t music hounds, like me. They don’t have time for that. They’re cops.

Despite any of these flaws, or perhaps in part because of them, END OF WATCH is a bruising, memorable viewing experience. There is a power to it that can leave the viewer shaken (it did me). It’s not the most flattering portrayal of policemen and policewomen ever, but it’s probably better than a puff piece. Simple hero worship sells these people short. This is one of the few movies to really make an effort to put an audience in those shoes. That’s a more admirable, more useful achievement, in my opinion. END OF WATCH makes cops seem like people who we can at once understand, and also who we can understand that we can’t understand, because we don’t go through what they go through. Every single day.