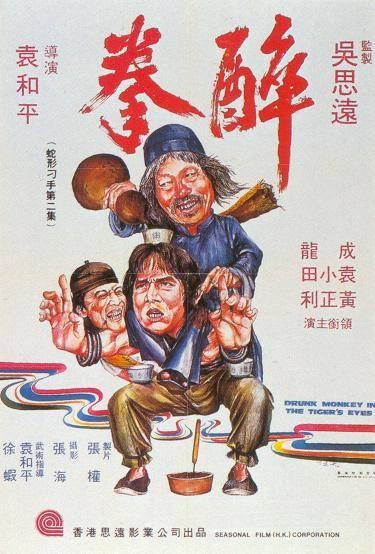 The death of Bruce Lee left an impossibly large void in martial arts cinema that, as expected, studios immediately tried to fill in as hackneyed and predictable a way as possible. Of course there were the clones of Bruce Lee – most notably Bruce Li, Bruce Le and Dragon Lee – and the other various imitators and rip-offs, as well as the numerous “sequels”, remakes and – most distressing – attempts to use old footage of Bruce (including footage of his funeral) in various wrongheaded ways. But even the opportunistic studios at the time knew that what they really needed was a new star to rally around. There were, of course, popular stars being promoted by the Shaw Brothers and Golden Harvest studios, but none of them had the charisma or international appeal of a Bruce Lee, so the search was on. And who better to turn to than the man who was credited with launching Lee as a star?

Lo Wei had previously directed Lee in two of his greatest and most renowned films – THE BIG BOSS (aka THE FIST OF FURY) and FIST OF FURY (aka THE CHINESE CONNECTION) – and gave himself immense credit for discovering the superstar. Of course, Lee and Lo Wei had plenty of difficulties in their working relationship before Lee’s death, which strongly influenced his decision to begin directing his own features and take a more active role in the creative process. Tasked with finding a new superstar, Wei (along with producer Willie Chan) picked out a young stuntman who had impressed them with his appearance in John Woo’s film Hand of Death. Changing his stage name to Sing Lung (“become the dragon”) in imitation of Bruce Lee’s Lei Siu-lung (“Little Dragon”), soon the young Jackie Chan was the star of Wei’s 1976 official (if there is such a thing) sequel to FIST OF FURY called, of course, NEW FIST OF FURY.

Unfortunately (or fortunately, depending on your perspective) NEW FIST OF FURYwas a box office disappointment, and though Lo Wei would continue to direct and produce films starring Chan – THE KILLER METEORS, TO KILL WITH INTRIGUE, SHAOLIN WOODEN MEN – it wasn’t until he loaned Jackie to Golden Harvest that the Jackie Chan that we know and love began to develop. It kicked off with the surprising success of SNAKE IN THE EAGLE’S SHADOW, where Jackie began to show off a character much different from the semi-invincible protagonists of the Bruce Lee films and their clones. Pairing Jackie with legendary choreographer (and director) Yuen Woo-Ping, the film introduced a skilled but vulnerable lead who enjoyed injecting large amounts of humor into the acrobatic, bone-cracking fight scenes. Recognizing that they were hitting on something special, Woo-Ping and Jackie would bring back this playful characterization in a film that would change the martial arts landscape forever: DRUNKEN MASTER.

But Jackie wasn’t portraying just any precocious troublemaker in DRUNKEN MASTER. He was playing the legendary real-life folk hero Wong Fei-hung, a character made immortal in a series of films starring Kwan Tak-hing throughout the 40s, 50s and 60s. But this wasn’t your dad’s Wong Fei-hung. This guy was a slacker, actively screwed with his teachers, and loved showing off – at least until his father (Lam Kau, a recognizable veteran of many of the Wong Fei-hung films) rapidly puts an end to all the screwing around. Pissed that his son attempted to (unknowingly) hit on his own cousin, attacked his aunt, and then beat the hell out of the bullying son of an influential town leader, he sends Fei-hung to train with an old hermit named Su Hua Chi (aka Beggar So) with a reputation for beating his students half (or more) to death.

Fei-hung does what any good teenager would do in this situation. He runs like hell! But when he tries to scam a restaurant owner out of a bill, he’s beaten horribly by the (weird looking) staff until he’s rescued by an old drunkard who easily outwits.. everyone. And also handily kicks their asses. It should be no surprise that this drunkard is actually Su Hua Chi (Yuen Siu-tien, director Yuen Woo-Ping’s father) and has come to collect his dickish, pissed off student. And if you enjoy old school kung-fu, then you know what’s coming next – TRAINING SEQUENCES, and lots of ’em! Wong Fei-hung is appropriately tortured in an attempt to strengthen his mind, body and make him appreciate the functioning alcoholic that is teaching him. That is, until Fei-hung – sick of being tested  – decides to (once again) RUN LIKE HELL, attempting to drown Su Hua Chi in the process. The end.

Just kidding. Heck, we haven’t even seen any Zui Quan (“drunken fist”) yet! No, what actually happens is that Fei-hung accidentally runs into Hwang Jang Lee (playing the role that gave him the nickname “Thunderleg”) who proceeds to beat him unmercifully, insult him personally, and then burn all his clothes. Dejected and semi-naked, Fei-hung heads back to the Beggar and promises that he’ll stop being so whiny and take his punishment like a man. This act of humility was apparently the key to unlocking Su Hua Chi’s usefulness, as he immediately reveals to Fei-hung all of the secrets of the EIGHT DRUNKEN IMMORTALS/GODS/FAIRIES, which is a unique style of kung-fu that is unpredictable, powerful, and enables his love of drinking! Throwing himself into the training, he soon masters seven of the eight Gods, deciding that the seventh (Drunken Miss Ho) is too feminine. I wonder if this might come back to bite him in the ass? Let’s see!

Oh! Remember how Wong Fei-hung was kicked out by his father for thrashing the son of the town leader? Well, that town leader is actually a massive prick and – after having a get-rich-quick scheme foiled – decides to put out a hit on Fei-hung’s dad! Even worse, the hitman just happens to be Thunderleg , who is back to his insulting/ass-kicking ways, but thankfully doesn’t strip the man naked. Arriving just in time to see his dad nearly murdered, Wong Fei-hung finally gets a chance to show off everything he’s learned – and it’s really, really impressive. Beggar So tosses him alcohol and his wavering, staggering, unpredictable moves throw off the assassin. Still, the two are rather evenly matched once the baddie shows off his own secret technique – THE DEVIL’S SHADOWLESS HAND (aka waving your hands in front of your opponent a few times and then PUNCHING THEM IN THE FACE).

The tide suddenly turns, and Fei-hung starts being THUNDERKICKED in the face and head over and over, as Beggar So tells him to use the eighth Drunken God technique – but he didn’t learn it! Thankfully, kung-fu is all about artistry, adaptation and improvisation so Fei-hung combines the forms of the other seven Gods into his own personal version of the final style. He camps it up big time, using his girly form to punish Hwang Jang Lee, eventually snapping his windpipe and leaving his crumpled body for the vultures. And like all good kung-fu movies, it ends IMMEDIATELY.

What Drunken Master is missing in originality – you’ll see the same basic plot with minor variations over and over again during this time period – it makes up for in a few key areas:

a) The fight scenes are absolutely magnificent, and they build wonderfully. Wong Fei-hung begins as an impressive student, but isn’t a superman. His minor victories are tempered with some massive defeats. Woo-ping is careful to show his development as he strengthens his body piece by piece, so when we finally see him break out some drunken boxing his win feels well earned.

b) It’s often hilariously profane. The Cantonese comedy is turned up to 11 with some moments strongly resembling the popular American frat-boy comedies of the period. But, the most revolutionary aspect was pairing this comedy with the lightning fast action. While Drunken Master was hardly the first kung-fu comedy, the style of humor and the quality of the martial arts was something totally new – and the audience reacted with overwhelming enthusiasm.

c) Jackie Chan. Not only does he embody rebellion and good-humor, but this more relaxed style of acting finally began to show all of his natural charisma that was lurking beneath the surface. Painting a young Wong Fei-hung as a bit of a punk could have been disastrous, but Chan finds the perfect note between silliness and seriousness and his impressive physicality could win over even the most jaded Bruce Lee fan.

Already facing growing popularity after SNAKE IN THE EAGLE’S SHADOW, DRUNKEN MASTER launched Jackie Chan into the stratosphere. It wasn’t long before Jackie was the one being imitated. Billy Chong and Yuen Siu Tien managed to revisit his drunken beggar character in a number of DRUNKEN MASTER rip-offs/tributes (STORY OF THE DRUNKEN MASTER, DANCE OF THE DRUNK MANTIS) before Siu Tien’s death the next year. Even Jackie would eventually revisit the character fifteen years later in DRUNKEN MASTER II (aka LEGEND OF THE DRUNKEN MASTER), which in the eyes of many is the greatest kung-fu film ever made. Jackie’s popularity would find even greater heights when he, along with the Peking Opera brothers Sammo Hung and Yurn Baio, started dragging the traditional kung-fu film kicking and screaming into the 1980’s where the budgets (and risks) would continue to escalate.

But this is where it all began.