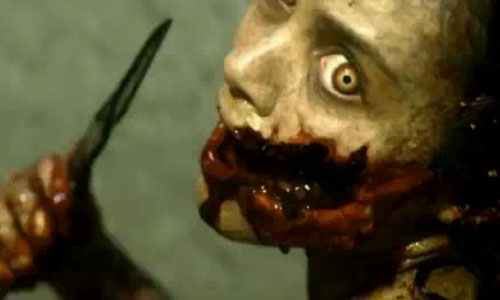 This review was originally published on April 7th, 2013. 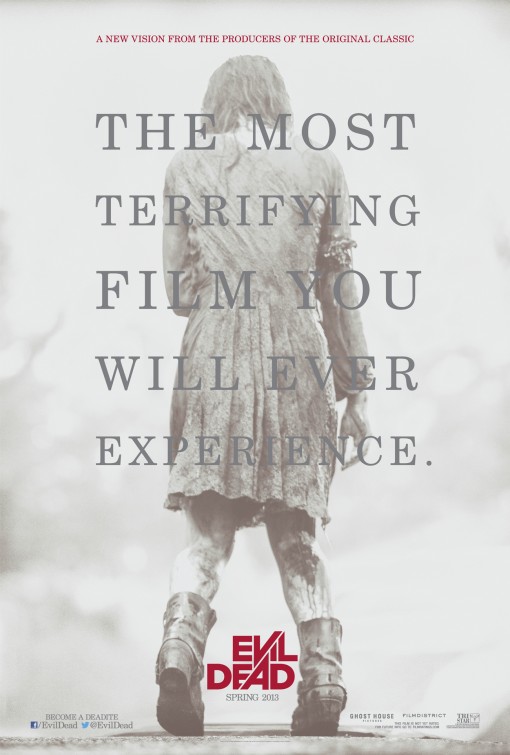 The Necronomicon has the word MOTHERFUCKER written in it now.  If you’re wondering how much the new EVIL DEAD movie diverges from Sam Raimi’s original, there’s a start. The remake doesn’t add all that much to the vocabulary, artistically speaking, but it does add plenty of profanity.  Raise a glass of fuck and shit!

This new EVIL DEAD is a quandary.  It’s a tremendously well-crafted movie and an instantaneous financial success, but it’s got the philosophical depth of a Kim Kardashian, and it’s probably about as good for women as she is.  Cinematographer Aaron Morton does a beautiful job on the look and the move of the film, but it’s got some ugly on the insides.

I can already tell that I’m going to catch heat for being less than adoring from all the gorehounds who just caught their new favorite movie this weekend.  I’m ready for it.  All right you primitive screwheads, listen up:  Few of you are my equal when it comes to love for original writer/director Sam Raimi, star Bruce Campbell, and all of their collaborators.  I have watched EVIL DEAD 2 and ARMY OF DARKNESS on a yearly basis or better, ever since discovering them with friends in high school.  I’ve never missed a Raimi movie since, and I geek on the Campbell cameos as much as anyone.  However I will readily admit, now that I think about it, I don’t actually go back to 1981’s THE EVIL DEAD all too often.  I love the movie because it’s the one that announced those guys to the world, and it’s got plenty of still-terrific moments on its own merit.  But there’s nothing THE EVIL DEAD can give me that EVIL DEAD 2 doesn’t do better, and funnier. What makes EVIL DEAD 2 such a perfect and unusual movie is that it welds horror and humor in a way that no movie before or since can approximate.  (ARMY OF DARKNESS is far more of a straight-up comedy, multiplied by medieval swashbuckler and Harryhausen homage.)  Innovative camera gags aside, THE EVIL DEAD is much more conventional, story-wise. It’s an auteurist work!  If you take the innovative camera gags away, you’re removing all the uniqueness of Sam Raimi, in which case you’d better swap in somebody with as much stylistic personality.

Five young people in a secluded cabin in the woods are besieged by dark forces who possess some, turn others into zombies, and murder the rest.  At this point, that’s the eighth of those seven basic plots you learn about in literary studies.  It’s not in and of itself an incredible story; it’s no kind of high-concept.  It’s all about the spin, or, barring that, the presentation.  To that end, Raimi, Campbell, and producer Rob Tapert hired Uruguayan director Fede Álvarez to helm the remake.  This is Álvarez’s first feature.  Beforehand, he made a few short films, the most famous of which being the calling card Ataque de Pánico! (Panic Attack!), a movie about giant robots attacking a Latin nation for some reason or other.  It’s an incredibly well-directed-and-edited short.  It’s a nothing story.  (It also uses John Murphy’s piece “In The House – In A Heartbeat” from Danny Boyle’s 28 DAYS LATER, a music cue which has since been recycled by KICK-ASS, G.I. JOE: RETALIATION, and every other action or horror trailer of the past five years.)  My tone may sound a bit dismissive, but I actually believe Álvarez to be a real talent behind the camera, particularly on the basis of the evidence of the new EVIL DEAD.  I’m just not sure what else he brings to the table.  Let’s get into it: 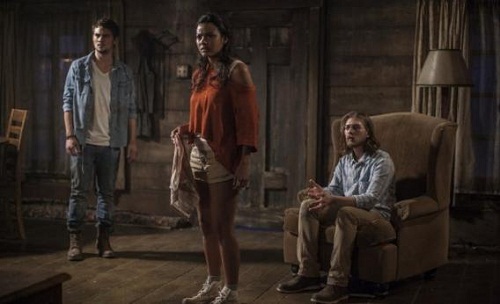 The five kids in 2013’s EVIL DEAD are Mia (Jane Levy from TV’s Suburgatory), Olivia (Jessica Lucas from CLOVERFIELD and TV’s abhorrent Cult), Natalie (Elizabeth Westmore), Eric (Lou Taylor Pucci), and David (Shiloh Fernandez).  Mia is a heroin addict whose friends Eric and Olivia, a nurse, have brought her to the cabin — which looks suspiciously like the cabin in this year’s MAMA — same location scout? — in order to help her kick the habit.  David is Mia’s estranged brother (despite the fact that he is Latino and she is not, but who cares), and Natalie is his girlfriend. David and Eric find this movie’s version of the Necronomicon, that nefarious text which has incantations embedded in it that awake ancient evils when spoken aloud.  It also has directions to undo the evil, but, this being an American gore picture, they figure this part out a little late to be of much help. 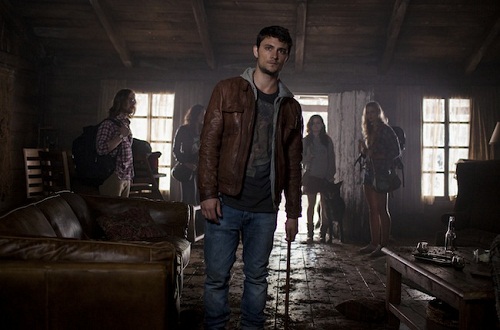 These kids actually have a bit more personality, or at least are a cluster of attempts at such, than the ones in Raimi’s original.  One should hope so.  Raimi was barely twenty when he made his movie; Álvarez is a 35-year-old man.  A filmmaker that age should be more concerned with well-rounded characters — that way it hurts worse when you lose them.  Don’t tell me this is just a horror flick, and character doesn’t matter — FUCK THAT.  Why do we love Bruce Campbell so much then?  Did he not bring personality to burn to the Raimi horror pictures?  Why do we love Jamie Lee Curtis in HALLOWEEN, or Kurt Russell in THE THING?  Horror movies without characters an audience cares about are just fictionalized snuff films, and if the latter is what you prefer, you may have sociopathic leanings.  Me, I like to root for protagonists.  This is the value a Jane Levy brings to a movie like this one. 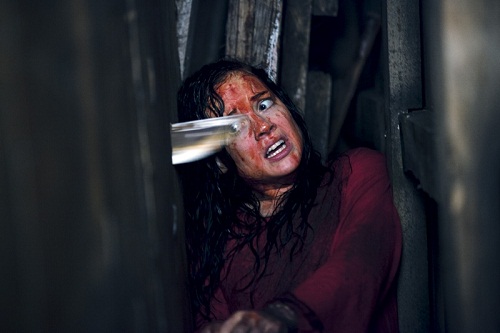 As of this weekend, she’s on her way to being a next-generation horror star, but Jane Levy was best known before this point as the star of Suburgatory on ABC, a slight but likable sitcom about a sophisticated city kid who moves to the suburbs with her single father.  I’ve seen enough of the show to know it’s not really my thing, but the actress is a real find.  She  conveys youthful intelligence and believable youthfulness, whether or not the material is as likable as she is.  She’s not a judo-comic charisma-bomb like Bruce Campbell, but drop her in a vicious horror flick like this one and you instantly will hope she makes it through with minimal bodily harm.

In the original EVIL DEAD, the woods come alive, quite literally, and one of their first and obviously most heinous acts is to rape one of the young women with branches and vines.  It’s a genuinely unsettling scene, capably directed for maximum horror by the young Raimi, but problematic in my eyes.  For one thing, it stands apart from the carnival-funhouse tone of gore for which Raimi’s horror films are best known.  It also stands out in the directing career of Sam Raimi, a filmmaker who is generally pretty square when it comes to anything remotely sexual.  The notorious “tree rape” only even makes sense in Raimi’s career as the juvenile attempts to shock and garner attention by a young filmmaker of prodigious talent.

There is a “tree rape” in the new EVIL DEAD.  Why is there a “tree rape” in the new EVIL DEAD?  You tell me. Really.  I’m curious.  Is that somebody’s favorite part of the original film?  Are there people who WANTED to see a new version of a “tree rape?”  I didn’t.  Maybe you did.  If you did, please explain why in the comments below.  I’m genuinely curious.  It’s not my idea of a good time.  I don’t like watching rape in any form in movies, but I might accept it if there were a story-based reason for it.  What I will not accept is any attempt to use the violation of a young woman as shock for shock’s sake.  This is why I don’t choose to revisit the original film, but at least that was Sam Raimi’s own misguided attempt at shock.  In the new movie, it’s an imitation of someone else’s attempt at shock.  It’s a remake of a juvenile and weirdly hostile moment, and if it’s done as a by-the-numbers matter-of-course obligation, then it’s stupid and thoughtless on top of juvenile and weirdly hostile.  There is ammunition for this argument.  There are all manners of imitation-slash-inspiration in this movie, including a sustained tribute to THE RAID: REDEMPTION, of all movies.  So maybe Fede Álvarez is a super-talented guy who loves his influences all to well, and just doesn’t think too much on his own.  Maybe the vague whiff of misogyny I’m catching off this movie is second-handed.

Am I making too much of this moment?  Am I, a resolutely hetero-American male, somehow becoming a feminist?  Fucking-A, maybe I am.  And maybe I’m becoming an overly-serious one at that.  But consider — without going into any more spoiler territory — the order of the kills in this movie.  Consider which characters go first, and which ones go worst.  Consider the intensity of the suffering the various characters endure.  Consider how the tone of the movie is set, after all, by a pre-credits setpiece which shows a father burning his daughter at the stake and shooting her head off.  Is it possible there’s a gender iniquity afoot in EVIL DEAD 2013?

The defenders already have their answer, of course, but I’m not going to go into the ending of the film in this space.  Let’s stick a pin, or pin a stake, into this discussion until a couple weeks from now when everyone’s seen it and can tell me how wrong I am, or not.  I will leave it with this, however:  During one particularly lengthy and gruesome battle scene, in which one of the female characters who died comes back to assail those still living, I heard this shouted out from an audience member behind me: “Shoot that BITCH!”  The shouter was a woman.  Does that make it better?  And does it help that one of the writers on the movie was Diablo Cody, the very smart and thoughtful screenwriter of JUNO, YOUNG ADULT, and the underrated JENNIFER’S BODY?  Maybe I have undone my own argument.  Maybe it’s not my argument to rightfully make.  But I see a systemic sickness in horror movies, and as much as a Ghost House production is not the one I would hope or intend to plant my battleflag, I guess I just went and did.  I love horror movies.  I’m also a son, a brother, an uncle, an admirer, a lover, a friend of women.  Those two aspects are extremely difficult to reconcile sometimes. 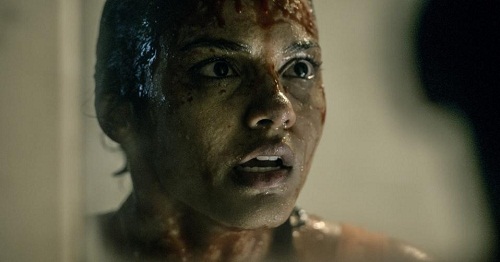 The new EVIL DEAD, as I hope I made clear, is impressively mounted.   It’s intense and hard to forget, with plenty of amazing practical effects.  I think it’s as good as a literal remake of an earlier movie as could ever be made.  But does it add anything, idea-wise?  I’d have to conclude no.  But in defense, the original EVIL DEAD was in most ways a calling-card movie in its own right.  Sam Raimi didn’t really start bringing the heat of unbridled creativity until EVIL DEAD 2 — which also, not for nothing, dropped the problematic “tree rape” shit and got down to the business of scaring, cracking up, and entertaining people.  Despite some of the harsh statements in this review,  I can absolutely envision Fede Álvarez taking that same, much-needed, developmental leap.

Fede Álvarez has made his version of EVIL DEAD.  It’s one of the greatest fan films ever made.  What remains to be seen is whether or not Fede Álvarez has an EVIL DEAD 2 in him, and that has nothing to do with whether or not he makes this movie’s sequel, if you understand me.  I may never feel the need to rewatch Fede Álvarez’s EVIL DEAD, but I’ll honestly be very interested to see what he does next.