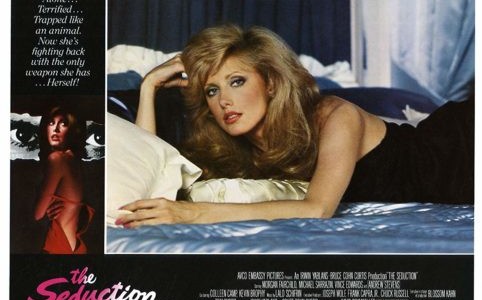 This surprisingly good-looking trailer promises all kinds of sleazy fun set in a world where the police apparently can’t arrest a creep for breaking into a woman’s home and harassing her.

The TV spot is slick, but not as wonderfully scuzzy as the trailer. I guess the audience for Dallas was probably not as open to the kind of exploitation sandbox in which THE SEDUCTION was playing as the grindhouse crowd that was given a trailer that played to their taste for sex and violence.

A clip of Stevens busting into Fairchild’s home to take pictures of her confirms him as one of the premiere creepy, would-be leading men of ’80s genre flicks. That he only becomes more pathetic and disturbing after getting his ass kicked is a credit to the longtime actor/producer.

Finally, Scream Factory has provided us with an exclusive clip of the apparently ageless Fairchild talking about the political aspects of the script and her personal experience with fan stalking that drew her to the role.

Keep a look out for our review of THE SEDUCTION Blu-ray when it is released later this month.