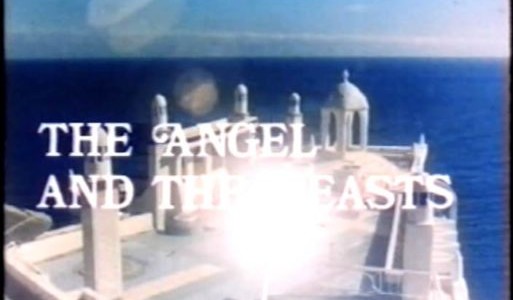 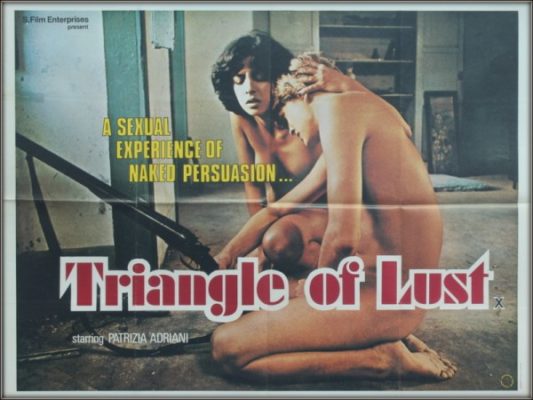 Like most of the films I have covered so far in this column, I had no idea what to expect out of THE ANGEL AND THE BEASTS (a.k.a. TRIANGLE OF LUST) when I started it. What seemed like a suspense/survival horror setup was quickly abandoned for something far more unusual. But more unusual does not always mean better.

Susi (Patricia Adriani) is the young mistress of Tom (Alexander Allerson), a vaguely defined rich man living in a vaguely defined city somewhere on either the Atlantic Ocean or the Mediterranean—it’s all very…vague. For reasons that only later become somewhat clear, Tom schemes with his wife Maud (Brigitte Stein) to murder Susi. Tom attempts the murder by taking Susi for a flight in his private airplane, faking engine trouble, and getting her to jump out of the plane using a parachute that is not supposed to open. 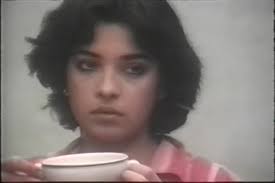 But the parachute does open and Susi finds herself on either an island or a secluded stretch of beach (once again—vague). She does not even have time to get her wits about her before she is taken captive by a group of criminals led by the near-feral Henno (José Antonio Ceinos) and the only slightly more civilized Wim (Miguel Ángel Godó).

Who the criminals are and why they are there is an explanation that is teased out longer than it should be. But of more immediate concern for Susi is the need to know if Tom’s plane actually crashed (since she does not realize she is the survivor of an attempted murder) and the possibility that Henno will lose all control, raping and murdering her.

And that is where THE ANGEL AND THE BEASTS really runs into problems. 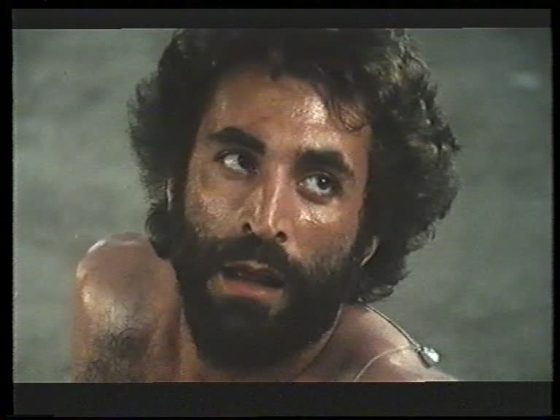 For a good forty minute chunk of the second act, the same cycle is repeated: Henno tries to rape Susi; Wim or Henno’s girlfriend Brit (Manu) stop him; Henno fights with whoever stops him and has angry sex with Brit; Susi is tied back up and looks blankly off camera. I would be tempted to say it is like the GROUNDHOG DAY of rapey, sleazy ’70s Eurothrillers, but that would be giving the film credit for being cleverer or more shocking than it actually is.

Director Hubert Frank (working from a script he co-wrote with José Gutiérrez Maesso) either does not care that he has only enough plot for a 45-minute-movie or is attempting a fusion of arthouse and exploitation sensibilities (a mixture that has worked many times) by staging the film like some sort of Purgatory for the characters. If the former is the case, it is just lazy filmmaking. If it is the latter (as I suspect), he does not pull off the ambitious turn into surrealism required for that to work. 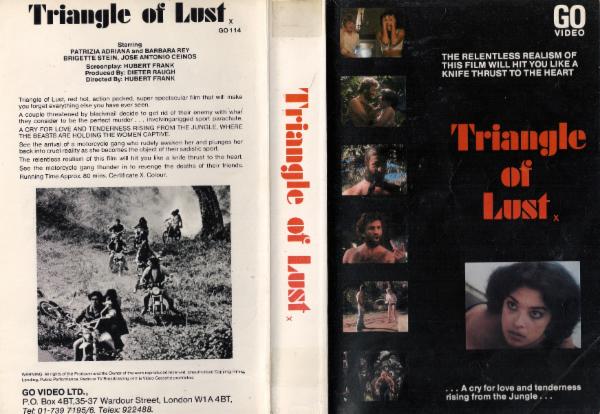 Despite the abundance of desperate characters (the film keeps piling on new characters until there is a literal motorcycle gang during a climax that might as well be in the dictionary under “deus ex machina”), the overall pacing of the film is lethargic. Most of the characters sit around looking miserable, wearing next to nothing (if not just altogether nude), sweating in the sun. Occasionally, they fight or have sex, but it is always with the same sense of lethargy, even when they are supposed to be passionate or angry. Even worse are Frank’s attempts to break up the monotony by cutting back to Tom and Maud. These scenes eventually reveal why the couple plotted to murder Susi, but are played so languidly with Tom talking in absurd parables about condors that they make the inaction with Henno and his gang seem exciting in comparison.

If I were being very charitable, I could look at the film as an attempt to make a feminist statement about ineffectual, brutish men trying to boost their egos by attempting to dominate every woman they come across. Who knows, maybe that is what Frank had in mind? But the execution of that idea—if it is the case—is so muddled under the repetitive plot that it might as well not be there at all.

In the end, the lethargic pacing overwhelms THE ANGEL AND THE BEASTS, causing it to commit the ultimate sin for an exploitation film of being boring. Even the surreal final ten minutes of the film that scraps almost everything that came before it is not enough to spark interest and the whole thing just stumbles to a conclusion that tries to be profound but in actuality comes off as a shrug of the shoulders.