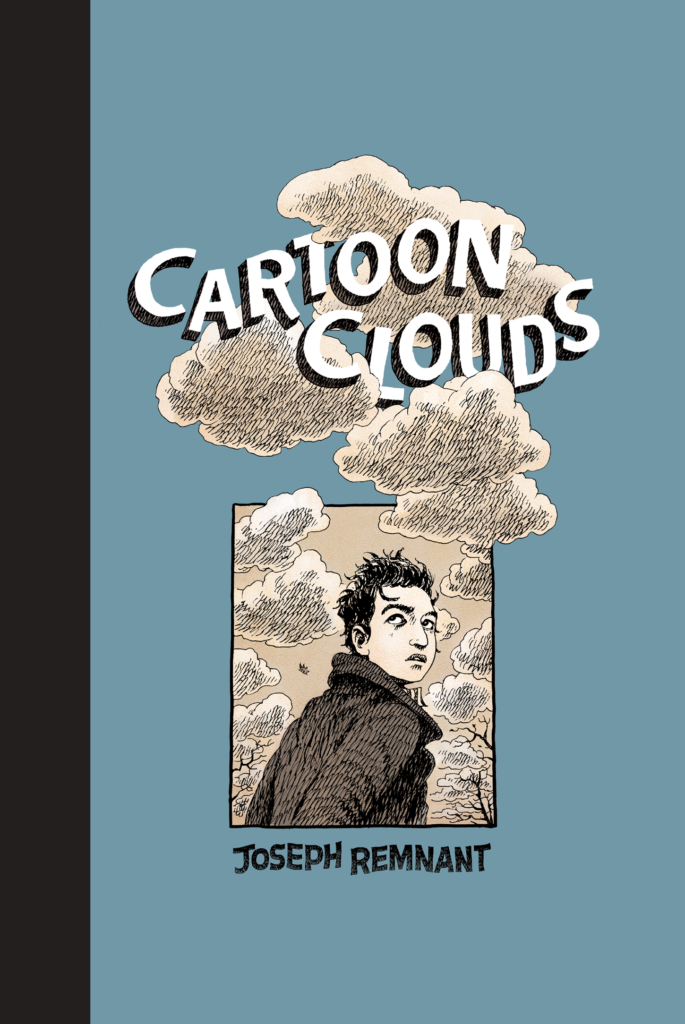 Another quasi-autobiographical art school memoir — is this what the world really needs these days?

It certainly seems a reasonable enough question — after all, Clowes pretty much eviscerated every last narrative inch available to anyone looking to mine this vein, and in just a handful of pages no less, with his (pre-Hollywood) “Art School Confidential” strip about 20 years ago, didn’t he? Still,  in the ensuing decades, any number of cartoonists have figured that their pre-and post-graduate “salad days” were worth telling us about, to the point where one could be forgiven for thinking there’s just nothing new to be gained from one more guy or gal going down this road. And yet — 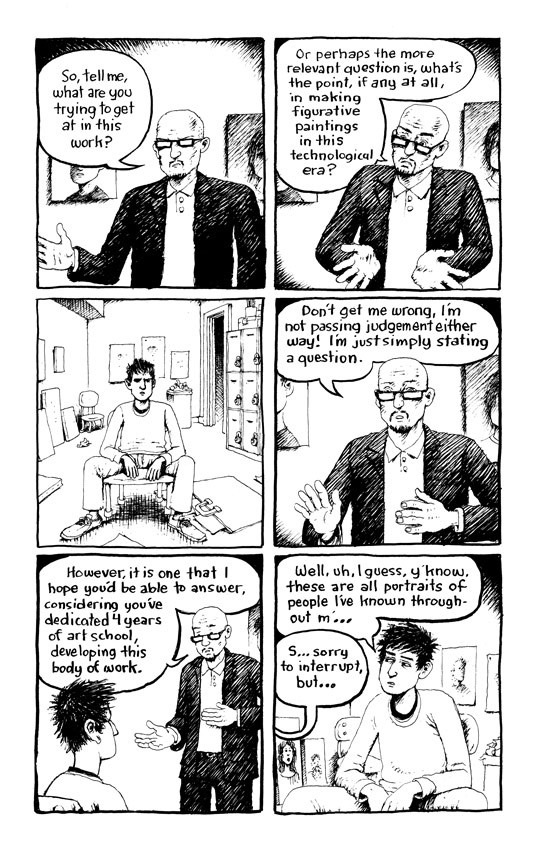 Joseph Remnant started serializing the work that would eventually become his first “solo” graphic novel, Cartoon Clouds, something like seven or eight years ago. He was slapping it up page-by-page online first, and then self-published just one (as far as I know, at any rate) issue of it in “floppy” format in 2012. After that? Nothing. Yet another project abandoned in favor of greener (literally, as in paying) pastures? Not so fast —

As of last week, Remnant’s work finally stands complete, courtesy of Fantagraphics, and while we’ve seen most of the early pages in this 160-page hardcover volume before (minus some changes both major and minor), most of what’s on offer here is definitely new and, it pleases me to report, worth exploring. Even if, by all rights, it probably shouldn’t be. 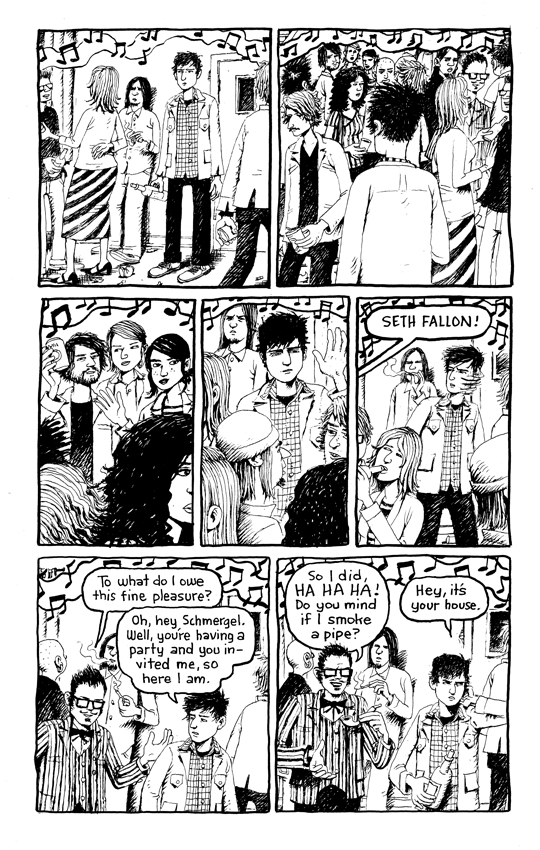 Admission time: I never went to art school myself (although some may argue that I sound so goddamn pretentious at times that I may as well have), but I sure recognize an awful lot of what Remnant’s stand-in protagonist, Seth Fallon, and his friends are going through in these pages. You’ve probably been there yourself, in fact, in the days/months following your own college graduation: Some friends find success in the “real world” fairly quickly, others don’t seem to adjust at all, and most just kind of accidentally find their way into — something, am I right? And along the way shit gigs are taken to pay the rent, dreams and hopes dry up, new (usually more limited) possibilities present themselves, numerous parties are attended, relationships of convenience slowly become more permanent, relationships that looked permanent evaporate, and yeah — there’s usually that one person who stands out as your own personal “what could have been.”

All of which is my way of saying that there’s something bordering, at least, on the universal in Remanant’s conversation-heavy tale, and that I defy most readers to not be able to relate to a whole lot of what’s on offer here. You’ll recognize parts of yourself in Seth, recognize parts of your friends in his, recognize parts of yourself in his friends, recognize parts of your friends in him. The dialogue’s razor-sharp and authentic, the trajectories of the characters ones you’ve seen, even lived, yourself. Everyone’s hopelessly flawed yet not altogether unlikable. There are some hackneyed storytelling crutches leaned into a bit too heavily, sure — a character named Kat gets short shrift by being portrayed as a one-dimensional social climber, Seth has an all-too-convenient “life-changing” encounter with idol John Pollard, etc. — but I can forgive most of this when balanced against the strengths of the rest of the material. What’s a little bit less forgivable is how Remnant waits until very nearly the end of the book to flesh out the object of Seth’s unrequited affections, Allison, into a fully-nuanced, three-dimensional person, but he makes up for lost time there in a big way right at the buzzer. 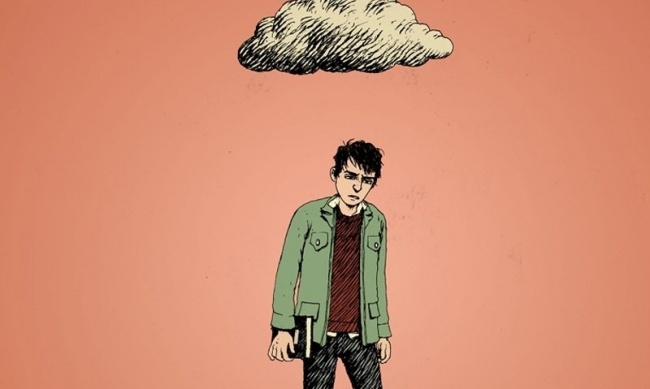 It goes without saying that a book that consists mostly of people sitting (or standing) around talking had damn well better find a way to keep things visually interesting, and that it’s not necessarily easy to do so, but Remnant’s got an expressive, naturalistic drawing style that brings out a lot of what his characters are thinking on their faces and in their body language. It’s not flashy, by any means, but it is highly effective, and each panel offers plenty to pore over as you analyze the illustrations for information that isn’t necessarily being spoken aloud. An eye for subtlety helps, to be sure, but it would be less than fair to say that the observant viewer will find anything left out or skimped over — this is detailed, fluid, and emotive artwork that’s quietly lovely in the way only real life can be.

Dove-tailing back to our original question, then — is another quasi-autobiographical art school memoir (complete with requisite trust fund babies, drug addicts, lecherous professors, low-ambition slackers, heaping student debt, and annoying-ass “dudebros”) what the world really needs these days? If they’re as well-done as Cartoon Clouds, I would say the answer is an unequivocal “yes” — it’ll remind you of what it was like to be a “twenty-something” at loose ends all over again, and make you feel both a kind of wistful nostalgia for days bygone, and a profound sense of relief that they’re over and that you made it out of them in one piece.