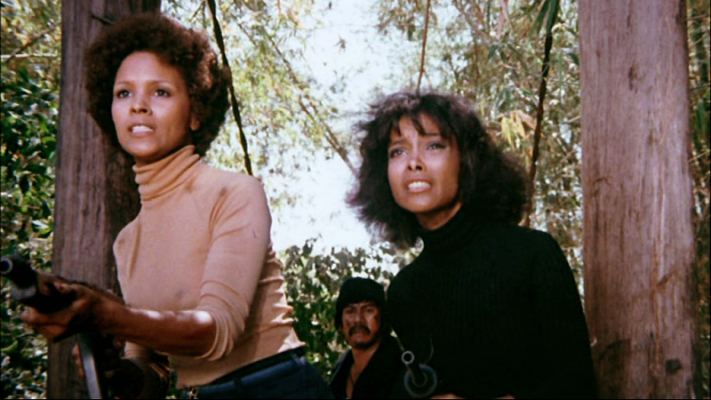 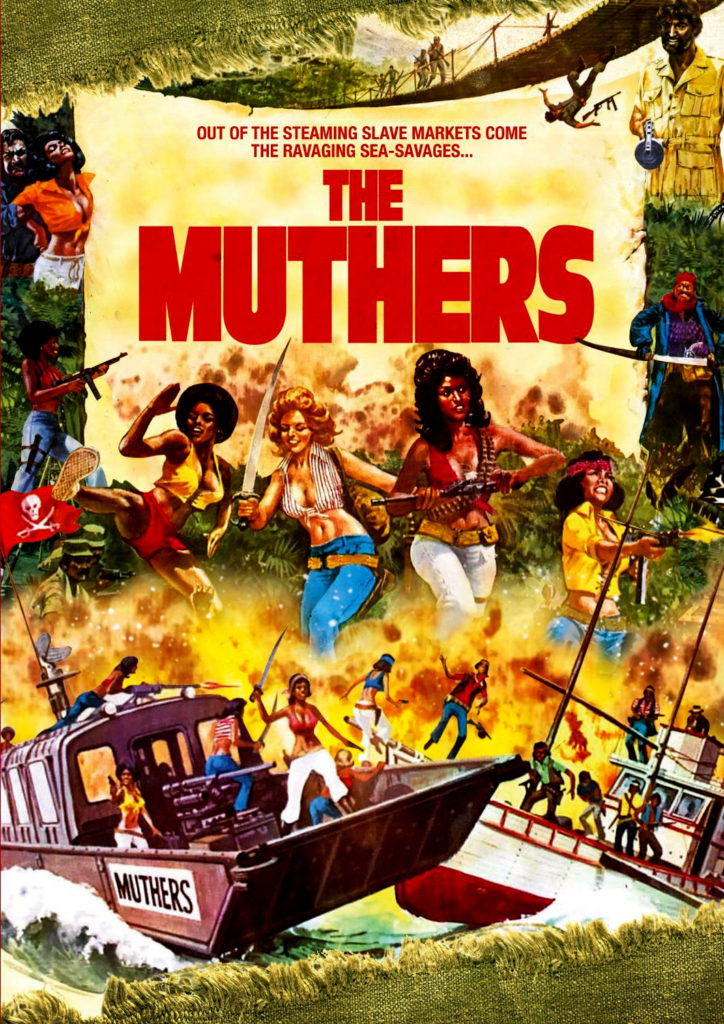 I like a good “women held captive in a Filipino prison/work farm” movie from the ’70s as much as the next grindhouse devotee, but given how good the first ten minutes of THE MUTHERS (read Jason Coffman’s excellent review of the Vinegar Syndrome DVD) is as a different type of genre film, I cannot help but feel the tiniest bit let down that it settled for dutifully hitting the beats of a known formula. Prolific exploitation producer/director Cirio H. Santiago is more than up to the task of putting together an entertaining, fast-paced escape-from-a-jungle-prison film, but I can’t quite shake wondering what could have been.

Kelly (Jeannie Bell) and Anggie (Rosanne Katon) are modern day pirates, cruising the waters in the Pacific (I believe the film is supposed to be set in the Caribbean since they name check Santo Domingo a few times, but every non-American actor they encounter is Filipino, so I can’t really suspend my disbelief in that regard) in a small war ship with their crew of loyal men. After a successful raid on a tourist ship, they get into a skirmish with another crew of pirates before retreating to their hideout on a secluded island. 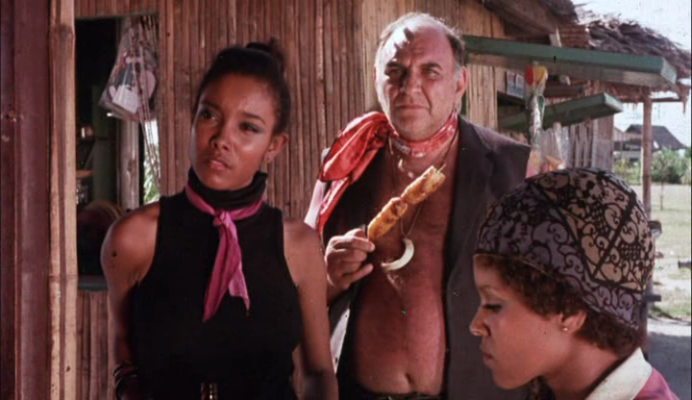 To reiterate: beautiful female pirates, a war ship, raids on a cruise ship, battles with other pirates, island hideouts. This is the movie I wanted. This is the movie I got for the first five minutes and the final ten minutes. Between those sequences, the rest of the film plays out in a far less loopy manner.

When our heroes return to their hideout, they discover Kelly’s sister has gone missing. Kelly and Anggie assume she has simply run off to the nearest bar and go looking for her. They are quickly approached by a man from the “justice department” (From an unnamed country, but who cares about such details?) who tells them that Kelly’s sister has been kidnapped and taken to a remote coffee plantation owned by the evil Monteiro (Tony Carreon). The official claims that Monteiro kidnaps women for labor (and sells some as sex slaves) on the plantation, working them to death, but he has no proof. He coerces Kelly and Anggie to go to the plantation to find out what happened to an undercover agent he sent in several months before. Eager to find and rescue Kelly’s sister, they agree to the mission and the rest of the film plays out as expected. 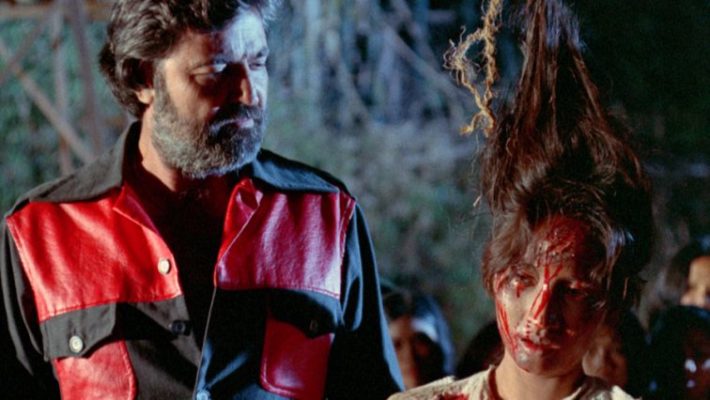 I do want to clarify that I enjoyed THE MUTHERS. Santiago finds a way to cross-pollinate the women-in-prison, blaxploitation, and pirate genres with such ease it makes me wonder why no one else has thought to do it. The cast is solid for such a low-budget production. Bell and Katon make appealing heroes and the striking Jayne Kennedy steals several scenes as a sympathetic inmate who has settled as best she can into her role as Monteiro’s mistress. There is even a winking self-awareness to the requisite shower scene with Kelly and Anggie expressing surprise that their captors would provide showers to the women they’ve enslaved. The usual claims of female empowerment in a cheap exploitation flick are more pronounced and justified here with Kelly and Anggie always commanding the respect of the men who serve as their crew, never having to use their sexuality to get what they want.

While I found several positives in the film, I could not help but wish the whole thing had been a pirate movie with the modern weaponry of machine guns and mortar rounds in place of swords and cannons. That would have been a fresh take on what had already become the over-saturated blaxploitation and women-in-prison genres. Instead, Santiago settles for something that feels a little too similar to other exploitation offerings cluttering drive-ins at the time of its release. 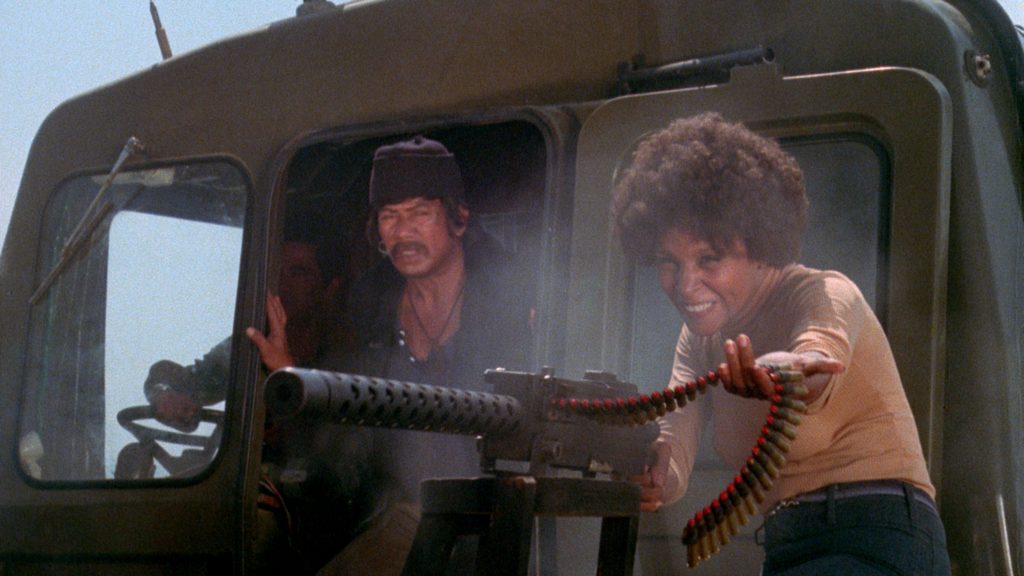 All complaints aside, you can do a lot worse than THE MUTHERS. It is a consistently fun movie with a few ridiculous highlights (a sequence with a cobra is hilarious) and it treats its female heroes with a little more respect than is usual. As cinematic comfort food goes, it is more satisfying than you might expect.