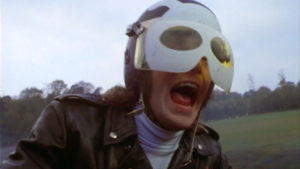 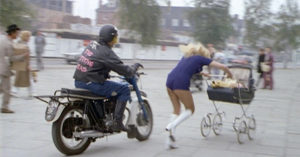 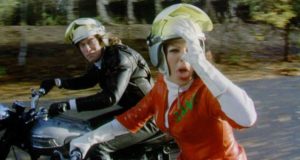 Tom (Nicky Henson) is the leader of a biker gang that call themselves “The Living Dead.” With only eight members, it is not much of a gang, but what they lack in numbers, they more than make up for in casual destruction as they ride through their small town square to tear up the marketplace. They even flat out murder people by purposely riding recklessly to cause fatal automobile accidents.

But Tom is not the stereotypical “angry young man” found in so many films out of the U.K. in the ’60s and ’70s. He lives in a mansion with his wealthy mother (Beryl Reid) and her mysterious butler Shadwell (screen legend George Sanders in his final role). Tom’s mother and Shadwell have raised him in an environment where it is normal for her to hold séances during which she serves as a vessel for the dead to speak with their families. This service is provided simply for the art of doing so. When a family offers a gift in exchange for one of these sessions, Shadwell reacts like this is an insult on par with pissing on the carpet. 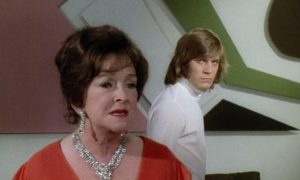 Through some mumbo jumbo involving a special locked room in the mansion, a vague mystery about his dead father, and a deal with the devil, Tom learns the secret to coming back from the dead: all he has to do is kill himself and truly believe that he will return. If he does this successfully, he will be immortal and able to do anything he wants. In possession of this knowledge, Tom immediately jumps on his bike and rides it off a bridge to drown in the river below.

Much to the amusement of Shadwell and the astonishment of the gang, Tom does indeed return from the dead—bursting from his grave on his Triumph in one of the few truly giddy moments of the film really embracing the absurdity of its premise. But after the sight of Tom riding a motorcycle out of the grave, the film quickly runs out of steam. 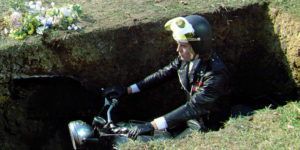 Working from a screenplay by Arnaud d’Usseau and Julian Halevy, director Don Sharp does not have a clear point for telling this story. It quickly becomes obvious that PSYCHOMANIA exists simply to smash together several drive-in movie staples that were hot at the time. But once all those genre bits are put on screen, nothing much is done with them. This is a real shame because the early scenes of the gang riding at high speed through traffic are well staged and actually look dangerous, providing real excitement. If the film had simply been a just another biker flick that came out in the wake of EASY RIDER, it might have been one of the better examples of that subgenre. But bringing in the supernatural element pushes the motorcycle mayhem to the background as Sharp focuses in on the relatively dull confusion of Tom’s girlfriend Abby (Mary Larkin) and the police investigation into the sudden rash of (mostly off-screen) murders being committed by Tom. 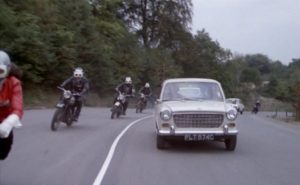 Thankfully, Sharp does allow a welcome streak of humor to run through PSYCHOMANIA. A montage of the gang happily offing themselves in different ways in order to return from the dead is legitimately funny, Henson and Sanders are having a blast and inject some wit into their performances, and the gang members are given silly nicknames like “Chopped Meat,” “Gash,” and “Hatchet.” It is not as though anyone involved with the production thought they were making a serious film, so it is odd that it settles for such an uninspired direction. 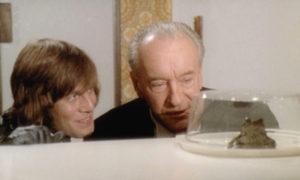 If Sharp had fully embraced the absurdist humor on the edges of the film, I’d be wholeheartedly recommending PSYCHOMANIA. But so much of the film feels perfunctory in the back half when it should have been increasingly loopy that it winds up coming off as a missed opportunity. 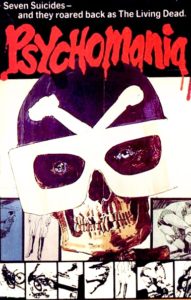