There’s a lot to admire in Xavier Gens’s COLD SKIN; there’s much less to actually like. It’s a gorgeously made genre morality tale that nonetheless feels stiffly, inertly told, all glittering seashell on the surface, but little more than chum once you look closely. Gens has put all his effort into a making a beautiful, philosophical genre drama that teeters on the same edge of “horror” as films like THE SHAPE OF WATER and EVOLUTION, but has failed to wring a compelling film out of his abundant resources.

It’s the early part of the 20th century. David Oakes (The Borgias) is a nameless young man who is traveling to the ends of the Earth to replace a meteorologist on a tiny, rocky, uninhabited island. When he gets there, the man whom he was supposed to replace is missing, and the only other inhabitant, a gruff lighthouse keeper named Gruner (Ray Stevenson) is not forthcoming with answers. 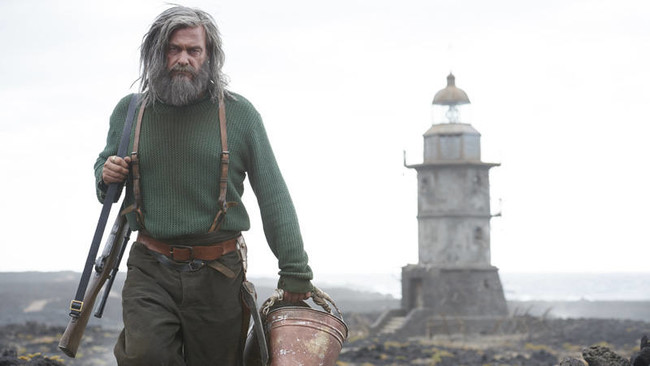 Those answers come in swift time as Oakes’s log cabin encampment finds itself under attack in the middle of the night by some sort of scaly sea monsters clawing angrily at his windows and doors. Though he survives the first night, his cabin does not make it through the second–an attempted, improvised fire moat goes wrong–and our unnamed hero is forced to make nice with the unpleasant Gruner while seeking shelter at the lighthouse.

It is there that it is discovered that Gruner has been keeping one of the fish-people (Aura Garrido) that attack the seashore nightly captive. A female, she is treated horridly by Gruner, somewhere between a pet, sex slave, and an abused wife.  As the nights wear on, and the two men develop an uneasy alliance holding off the monsters, our nameless hero begins to bond with the creature, whom he dubs Aneris, and question the motives and behavior of the aggressive and violent Gruner.

COLD SKIN begins with a Nietzsche quote. THAT Nietzsche quote. The one about fighting monsters. It’s an overused quote, one that acts almost as if it’s a big, bold yellow highlighter, spelling out a film’s themes like a loose-lipped drunk at the bar. Placing it at the very front of your movie is a bullseye for obviousness. Alas, Gens takes the bait. From frame one, it’s blatantly obvious what, narratively and subtextually, his film is going to be about, and once you figure it out, it becomes a repetitive slog to make it to the end.

For a good twenty minutes or so, Gens crafts a potentially interesting period horror effort that harkens back to the mid-tier Lovecraft adaptations of the ‘80s and ‘90s–films like THE RESURRECTED or BLEEDERS. The island is awash in a chilly, desolate, sea-salt atmosphere, the location shooting is resplendent with earthy gloom, and the actors are fine in their otherwise archetypal roles. The first attack scene on the cabin is a marvel of a suspense and Gens wrings maximum eeriness out of scenes of the fishmen converging on the lighthouse en masse to get at the fleshy men inside, all while Aneris makes strange huffing noises into the air, as if she is summoning her brethren.

It’s there that the film goes slack. Once Gens has established his premise, he doesn’t know what to do with it–thematically OR narratively. The result is well-made but thoroughly one note–a film that alternates between too many similar scenes while endlessly hammering in its message over and over (and over and over) again until the credits finally roll. Soundly made, and with a decided philosophical take that (mostly) avoids the pernicious cliches of much horror, this is by and large the most mature film made by the same man who did a French Extremity take on a TEXAS CHAINSAW riff, made his Hollywood debut with a video game adaptation, and eventually went on to make a possession movie featuring a scene where a woman’s crotch is covered in ants. Gens is attempting something grander and more classically staid here, with a real message underneath its shiny genre exterior. It’s just that the message is an obvious one, hamfistedly reiterated a every possible moment: the real monster is, well, man. COLD SKIN never veers from that message, not from that Nietzsche quote on, and once the pieces fall into place, it means the film goes exactly where you expect it to go. 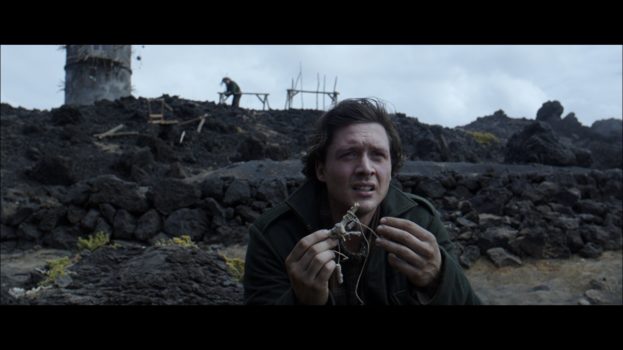 COLD SKIN doesn’t just spin its wheels thematically; it does so at a storytelling level, too. Once our hero makes his way to the lighthouse, the film shuffles the deck between a quartet of basic scenes: monsters attack, Gruner berates and threatens his new roomie, Gruner outright physically assaults (and rapes) the fish woman, our hero begins a gentle friendship with Aneris. Wash, rinse, repeat. It rubs in Gruner’s bestial, isolated awfulness, our hero’s unimpeachable goodness and the fact that, hey, the monster’s aren’t monsters after all. None of the characters are developed past their one note (cruel, noble, scared and curious), though the actors do what they can to carve out memorable space within their singularities. Gens is making an honest attempt to make a thoughtful film dissecting ideas like colonialism, othering, and domestic abuse, filtered through a genre lens, but it’s done with such heavy-handed, superficial simpleness that none of his efforts stick.

Which is too bad, because COLD SKIN is, from a technical standpoint, a wonderfully made film. Some of the CGI–particularly greenscreen work in the opening scenes–is pretty phony looking, but aside that, this is a beautifully shot film with gorgeous scenic work and well done prosthetic effects on the fish people. It is, on its surface level, a strong film, but the more time you spend with it, the more it just caves in on itself. Pretty but lifeless, it’s kinda like finding a glittering seashell on the beach: attractive, but there’s nothing inside. 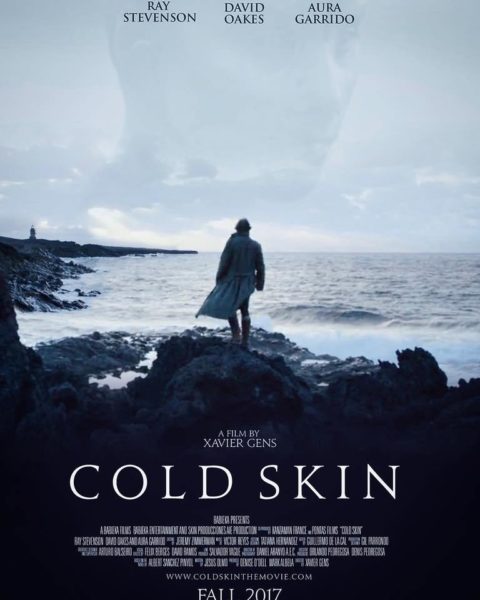