Stenio (Daniel de Oliveira) is a good man. He’s a loving father, a dutiful husband, and a considerate co-worker. He works the night shift at the local morgue preparing various bodies for their final stages before burial. He also has a power. He can speak to the dead. Every shift, as he preps the bodies lying on the cold morgue slab, he gently leads them into that good night. But even good men can make bad decisions and THE NIGHTSHIFTER is going to pay.

Stenio’s wife is cheating on him. Tired of the morbidity of his job, she’s been shacking up with a local bakery owner. When a gangbanger winds up under his care, shanked by rivals after being snitched out, Stenio decides to break his own rule: to not use information told to him by the dead for his own gain. The kindly coroner decides to orchestrate an act of revenge that will leave several people dead, and his life leading down into an inexorable hell.

Back in 2003, Brazilian filmmaker Dennison Ramalho made a striking debut with his acclaimed 21-minute epic of satanic retro-’70s sleaze, LOVE FROM MOTHER ONLY. It seemed to announce the arrival of a bold new talent, but Ramalho never managed to make the transition from shorts-level work to full length nightmares (outside of penning the script for EMBODIMENT OF EVIL,  Brazilian horror legend Jose Mojica Marins’s return to playing the role of the scandalous, top-hatted blasphemy-monster, Coffin Joe.) THE NIGHTSHIFTER marks Ramalho’s 15-years-belated move into feature territory, evoking a sort of grittier, street level James Wan film by way of EC Comics moralizing. 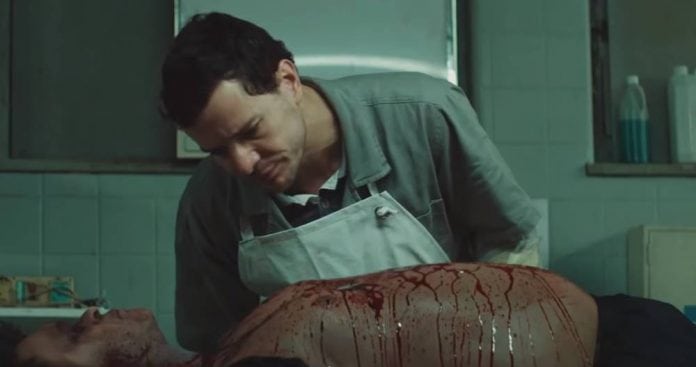 If nothing else, Ramalho is a crafter of delirious, striking nightmare images. LOVE FROM MOTHER ONLY packs a lot of disturbing imagery and ideas into the space of an old-fashioned TV sitcom, underlining it with a hyperbolic grimy intensity–all sweaty carnality and blood-caked mutilation. THE NIGHTSHIFTER is a longer, loopier film, running nearly two hours, and sometimes, unfortunately feeling it. Fifteen years in the trenches has made Ramalho a more mature and thoughtful director, less inclined toward the shock-a-palooza grunge of his earlier efforts, and attuned to the familial dynamics underpinning his haunted house narrative. Alas, that can sometimes make THE NIGHTSHIFTER seem a little too much like any of the other drama-bedecked films in this new international vogue for (gag) “elevated” genre storytelling. Not that there’s anything wrong with giving your popcorn horror tropes some depth and nuance, but when you fall back on stereotypical, underdeveloped troubled kids/well-meaning parent tropes, it can lead to some arid patches distending the narrative.

Luckily, Ramalho still knows how to subject his audience to scare sequences with verve. The director actually manages to find some new ways to spook us out in the overdone environs of the haunted house market. Beyond giving Stenio the ability to speak to the dead (which Stenio has accepted with a no-big-deal rectitude), there are the ways in which this film’s malevolent mama messes with Stenio’s mind and begins to make him look worse and worse in front of his kids and the baker’s daughter, with whom he begins a tentative romance. There’s an abundance of the typical, “things-go-bump-in-the-night” jumpscares that always are a part of these films, but there’s also a scene where Stenio has to traverse a maze of spectral razor-wire to save his kids from the ghoulish creeper attempting to get at them.

There’s something of an almost less colorful, cartoonish TALES FROM THE CRYPT/CREEPSHOW vibe abutting the gritty naturalism of the rest of Ramalho’s familial freakshow. The scares are underscored by maniacally shrieking “horror movie” violins, and the film’s ghostly hell-mother antagonist sneers and cackles at Stenio with a malicious glee. It’s an almost fitting choice to make the film’s villain such a personal one to the family: instead of a nameless entity from the other side going after an innocent family, it’s the family’s own troubled matriarch, back from the dead and pissed off, willing to drag her kids to the afterlife just to spite the meek Stenio. It’s a child custody case, literally, from, hell.

It’s also a problematic choice, especially in conjunction with his short film and his script for the Coffin Joe film. Both of Ramalho’s films feature “unclean” woman (an adulterous mother, a free-spirited jungle witch) causing supernatural chaos to fall upon weak-willed men, with the result being bloody violence heaped upon other women in the men’s lives (and that’s not to say anything about Ramalho’s torture-porn take on Coffin Joe.)  That’s a monstrous femme construction that begins to shade too much into misogynistic territory. It doesn’t cripple THE NIGHTSHIFTER–the film ultimately ends in a place that’s less about the supposedly ungodly wrath of angry, “wicked” women than it is about the yoke that the guilt of wrong-doing places on you–but it’s something that maybe Ramalho should concentrate on not falling into in future films.

That said, while THE NIGHTSHIFTER, is an imperfect amalgamation of Ramalho’s nastier tendencies and a desire to stake some ground in the more broadly appealing post-CONJURING international marketplace, it is still an effective, if probably too long, blast of creep-out ghoulishness.