How the heck do you make an original, clever zombie movie in 2018, when the genre has been so beaten into the ground that even zombie-related metaphors for the genre’s rise from the dead have been beaten into the ground? Japanese director Shin’ichirô Ueda has somehow found a way with ONE CUT OF THE DEAD, a gleefully entertaining film that takes a gimmicky premise and delivers plenty of entertainment, even if it’s sure to confound those looking for a splatter fest.

Before I go into too much detail, I will say this: I went into ONE CUT OF THE DEAD knowing only one thing–that it was a Japanese zombie film done in one take.  Based on this premise alone, I was intrigued, and it satisfied this premise in such a unique way that I felt I could recommend the film. If that’s enough for you to add it to your watch list, and you wish to know no more, stop reading this review and remember to stay with the film through some initial awkwardness in the first half hour. Most synopses of ONE CUT will go into the actual “plot” of the film, which doesn’t kick in for a bit, but I had a great time with the surprises it brings, and there’s no way to delve into why ONE CUT is unique without going into them. Here’s something about shark video games for you to enjoy until you watch the film. 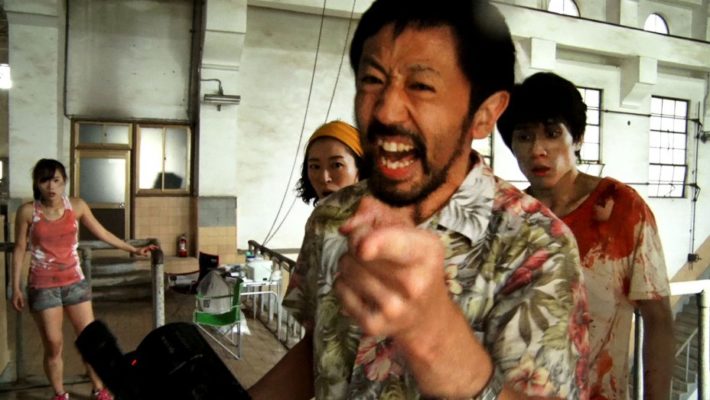 Now that those who want to go in blind are gone, we can move forward. Like a lurching zombie in a zombie movie. (See what I mean about zombie-related metaphors? We should probably just stop them entirely.)

The first 35 minutes or so of ONE CUT OF THE DEAD are exactly what the premise of the film suggests. During the shooting of a low-budget zombie movie in an abandoned location, the cast and crew starts to become infested with actual zombies, and the deranged director insists on filming everything for maximum dramatic effect.  All done in one-take, it’s a bizarrely sloppy film, with long pauses between action, awkward dialogue, a few things that make little sense, and several crucial moments happening off-camera. 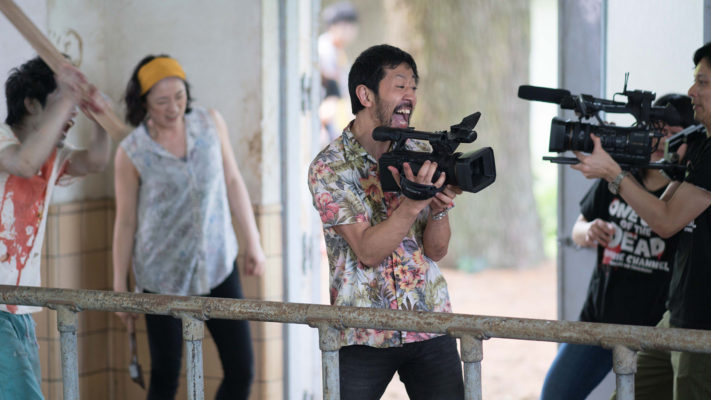 After this film ends, however, we go back to the initial creation of the movie within ONE CUT OF THE DEAD, titled, of course, ONE CUT OF THE DEAD. We follow the planning, rehearsals, and ultimately the live filming of the movie itself, as director Higurashi (Takayumi Hamatsu) deals with the various issues of his cast and crew, his daughter’s obsession with his leading man, and his wife’s need to find something of her own to be involved with.

The results make ONE CUT OF THE DEAD a horror variation of NOISES OFF!, as the bizarre nature of some moments in the first half-hour become explained through the mechanisms of what’s going on behind the camera. Emergency casting is implemented, cameras are handed off, make-up is quickly applied, and the script is rewritten and, occasionally, improvised. It’s a tremendously entertaining take on, not zombies, but low-budget filmmaking in general, as well as the absurdity of shooting a carefully-orchestrated plot in one prolonged take. 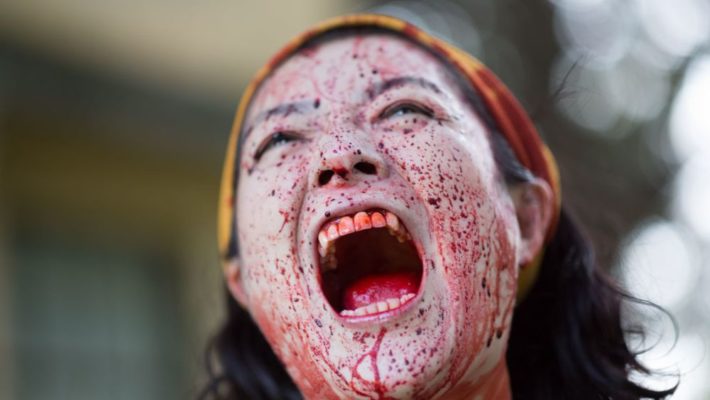 Benefitting the film is a cast that’s capable of portraying characters on multiple levels, be they the actors and crew of the film, the cast within the film, or even the cast within that film.  What seems like a lackluster performance in the first third is easily reconciled with the events of the rest of the film, with Harumi Syuhama taking top mention as Higurashi’s wife, who reluctantly takes the chance to return to acting in the film. The cast manages to not only make the film convincing, but they make it not convincing when it needs to be, no easy feat for a cast in a one-take situation.

ONE CUT OF THE DEAD doesn’t quite reach the insane comic heights that its premise suggests it may, as the issues that the on-set cast and crew deal with are more many smaller moments than the increasingly frantic build-up to one giant one (though a storyline about Higurashi’s wife comes close), but that doesn’t mean that ONE CUT lacks for sheer entertainment. Due to the situation it’s setting up, it takes a while to get there and fidgety audiences may tune out due to the (intentional, and ultimately paid-off) awkward moments, but genre fans will find a lot to like, as ONE CUT OF THE DEAD manages to create a new, compelling, and funny take on a tired genre and gimmick. 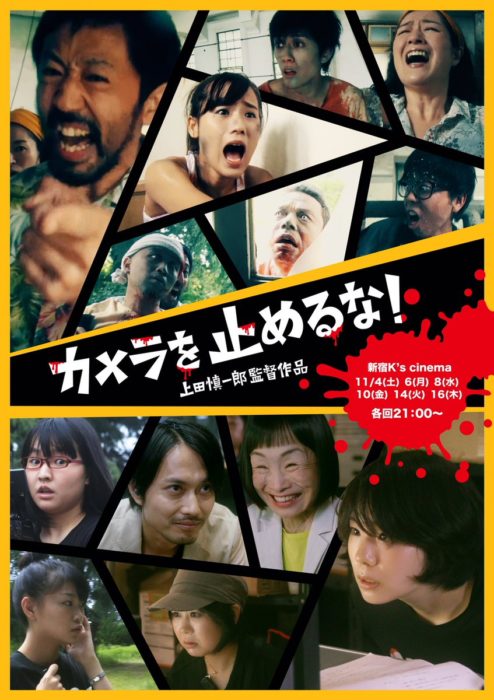