Though I never went to college, I abhor everything about fraternity culture. I’m not talking about your filmic frat culture witnessed in NATIONAL LAMPOON’S ANIMAL HOUSE or REVENGE OF THE NERDS. No, I’m talking about the real-life shit that resembles something less than real-life and reeks of the debauchery of a Larry Clark film. From the boozed out, Cro-Magnon bros to the hazing rituals that leave poor, unfortunate pledges in the hospital or the morgue to the awful, sexual assault that runs rampant in the hallowed halls of academia. However, I’m a huge goddamn fan of mixing horror films and thrillers together in a toxic concoction and if the film involves dumb college kids getting hazed, it’s all the better. Remember the pledges from THE INITIATION or HELL NIGHT to the Tales From the Crypt episode House of Horrors, circling all the way to the pledges in NIGHT OF THE CREEPS. Pledges in horror movies never fair well, and it’s my pleasure to tell you that this tradition is upheld with Daniel Robbins’ PLEDGE. 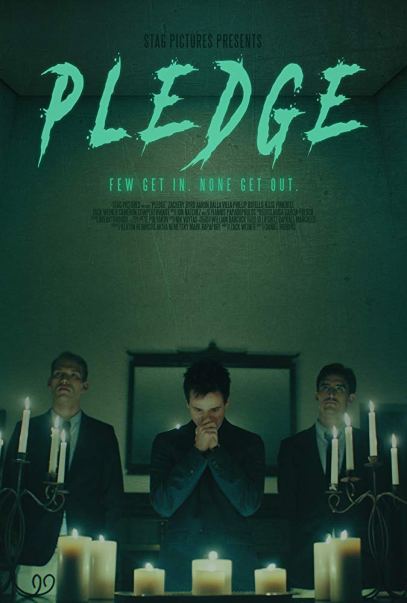 PLEDGE is a cutthroat, grueling experience. It’s a raw, exposed nerve. It’s a back alley surgery with unclean utensils and dirty hands. It’s a shot of rotgut whisky that tastes terrible and burns into your innards. The plot is relatively simple: you’ve got three pledges, Justin (Zachery Byrd), Ethan (Phillip Andre Botello), and David (Zack Weiner—pulling double duty as the film’s writer) who are hard up to get into a fraternity no matter what the cost. When their efforts to get into the frats go belly up, they’re led to a party in a mansion off the beaten path with the promise of babes and booze and after a night of cosmic partying, they’re invited back to pledge this fraternity…and away we go. The three leads all turn in excellent performances, despite David being one of the most waffling, annoying characters committed to celluloid in 2018. One moment, he’s likable, the next, he’s being absurd, especially in the light of the imminent danger right in his frigging face. Byrd (a Paul Partain look-alike if there ever was one) is a good lead. As for the preppy pledge-master psychos, Aaron Dalla Villa as Max and Cameron Cowperthwaite playing Ricky turn in twitchy, terrifying performances.

The film is gorgeously shot, the dark scenes have the appropriate amount of menace and atmosphere to them, and that opening aerial shot is nicely picturesque. The writing for PLEDGE is tight and taut, whipping us quickly through the set-up to the gruesome punchline all within a brisk 77-minute runtime. The upside to PLEDGE is that we’re dealing with this relatively short run-time. Seventy-seven minutes gets you a quick shot and quicker chaser. There’s no need for frivolities, no need for a fleshed out backstory for the pledges or the sinister frat. We aren’t dealing with some film with greater purpose aspirations here. It’s a meat and potatoes horror/thriller. The reveal of the fraternity’s true purpose is done neatly and effectively with a couple of lingering shots and a line of dialogue. That’s it. Because the torture starts so quickly, you feel like there’s no way out and no way to breathe. It’s unpleasant at times, and that’s a good thing. Throughout the entirety of the third act, events move at a breakneck speed. There are times you’ll feel angry, and times you’ll feel a gasp of air when it seems like one of the boys will escape, and there are times where you’ll question the nature of humanity and the depths that one can plumb to be a truly cruel person. The final scene is executed nicely as it hints to something greater hiding in the periphery of the picture and leaves the film ending on an ambiguous, but perfectly pitch-black note.

Now, the problem with a film like PLEDGE having such a short run time is that the incidents that are foisted upon the unfortunate pledges go from zero to one hundred in a span of ten minutes. With something like this, you start small and let the gradual fucked up nature spiral forth. It starts with the pledges and goes straight to bodily harm. Yes, this drops any semblance of safety for our leads, but it ramps up too quickly. PLEDGE has touted itself as a companion piece to GREEN ROOM, an apt comparison, but think of the way “The Ain’t Rights” are introduced and developed throughout that film. When shit goes south in that film, it gradually builds to full-on violence. A little variety in the torture could’ve kept things fresher. Not that violence has to be unique to every scenario, but when you’ve seen the same stuff doled out in past horror films, it feels stale. A particular torture set piece, while executed well and acted with the appropriate degree of realistic suffering, is the same one we’ve seen in other horror films (think SINISTER II). There’s also a third act twist involving one of the pledges that falls a little flat in execution. Despite some minor foreshadowing in an early torture sequence, we’re meant to see this twist as a major revelation, but it just comes off as a minor occurrence—especially given all the madness swirling around this character. I don’t need monologues revealing hidden depths, but if you’re going to spring something on your audience, just handle it a little less clumsily.

These small grievances aside, PLEDGE is a nasty piece of work to show off to your friends so that you can watch them cringe, and with the tight runtime, you just go in, get your hands and soul messy, and get out.