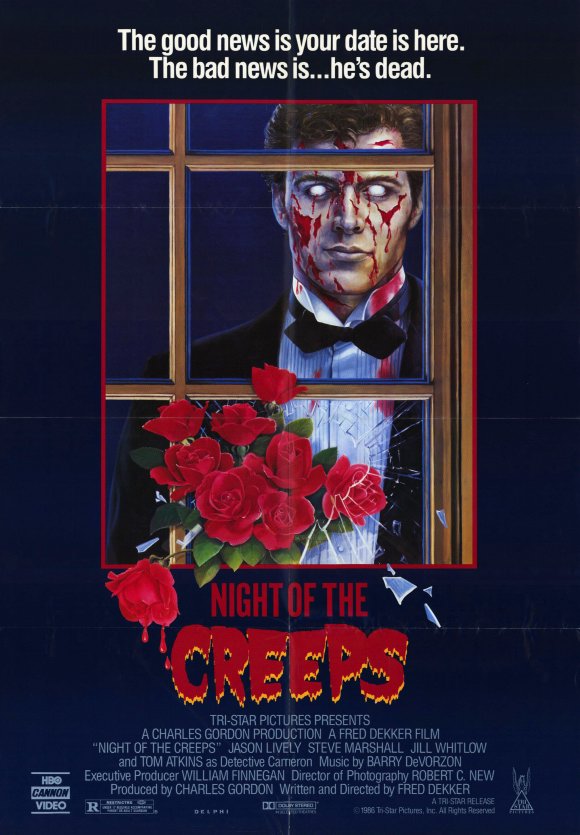 Here in New York, you can order an everything bagel.  If you can’t decide whether you want one with sesame seeds, or garlic, or onion, you can get ’em all at once.  NIGHT OF THE CREEPS is what I call an everything movie.  To use another food-based metaphor, it’s a monster drink, all the sugariest flavors mixed up in one soda, a mix of everything kids and grown-ups alike love so much about genre movies.  This is a movie  that seems to answer that question: “If you got your chance to make your first movie, why wouldn’t you put in every single awesome thing that you could?”  For his first big-studio feature film, writer-director Fred Dekker tossed in aliens, zombies, pretty girls, psycho-killers, cars, fire, boobs, explosions, zombie animals, and one of the most lovable hard-drinking, trenchcoat-wearing, one-liner-saying badass hero detectives that ever patrolled the busy turf of the 1980s.  The result is a movie that deserves even more love than its already-considerable cult following provides. 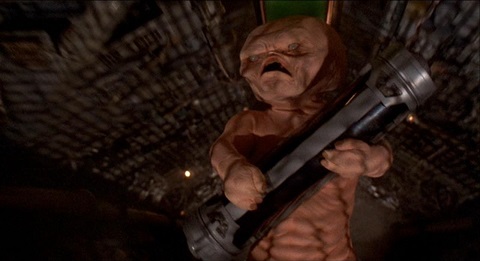 NIGHT OF THE CREEPS begins with a nearly insane prologue, on board an alien spaceship.  Aliens (complete with big blue alien-language subtitles!) run through their ship — apparently streaking by the way — trying to stop something from escaping.  But it does.  That escaped alien experiment lands on Earth, in 1959 (complete with black & white cinematography), where an axe-wielding maniac murders a female college student, and, at the same time, her date is attacked by an alien slug from space, which plunges itself down his throat, possessing him like a zombie.

Thirty years later, Chris Romero (Jason Lively, Blake’s older brother) and his buddy J.C. (Steve Marshall) are having a hard time fitting in on campus.  Chris falls for a girl named Cynthia Cronenberg (Jill Whitlow, beyond adorable) who he assumes is only into frat guys.  Chris tries to pledge the frat to get closer to Cynthia, and J.C., ever the loyal wingman, signs up with him.  The hilariously blond fraternity president dispatches Chris and J.C. to steal a corpse from the campus lab.  They lose their nerve and run away, after starting to thaw one of the corpses.  The corpse they end up disturbing is the slug-infested college student from 1959, who gets up and kills the lab attendant (a pre-teen-idol David Paymer) and then starts spewing slugs all over the place.  Soon enough, bodies are piling up and Detective Ray Cameron (Tom Atkins, awesome as all hell), who has personal ties to the case, has to shake off a whiskey-drenched stupor in order to stop a campus-wide outbreak. 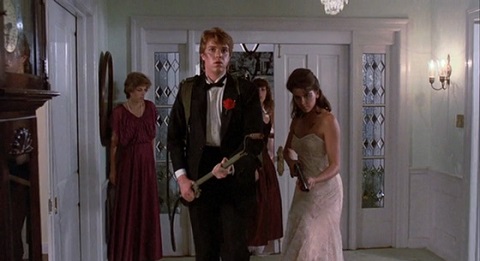 Does that sound like a mess?  It sure doesn’t play that way.  NIGHT OF THE CREEPS runs like a well-planned party.  It’s a movie that is punch-drunk with the love of movies.  You may have noticed something familiar about some of those names — Romero, Cronenberg, Cameron, J.C. (as in John Carpenter), and there’s also Raimi and Landis –  pretty much every character in the movie is named for some genre-film luminary.  Normally that stuff can come off feeling gratuitous and distracting, but here the swarm of references add up to one more joyous kitchen-sink element underlining Fred Dekker’s obvious enthusiasm in putting this movie together.  NIGHT OF THE CREEPS is best described as a sci-fi movie meets a 1950s period piece meets a film noir meets a college comedy meets a teen romance meets an action movie meets a zombie invasion.  It’s the kind of high-concept which shorted out the high-concept generator, and made it start raining Nesquik. 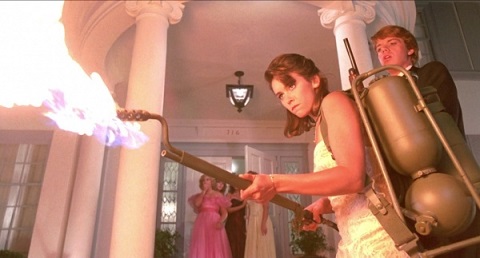 The whole movie is a sugar high.  Some of the tonal shifts are a tiny bit rocky, but the pace of the story moves so quickly that nearly everything works.  All of the young characters are well-cast: one-time Griswold family member Jason Lively (NATIONAL LAMPOON’S EUROPEAN VACATION) grows on you as the movie goes on, love interest Jill Whitlow is impossibly cute, and even J.C., the endlessly-talkative comedy sidekick, is relentlessly likable.  The fact that he’s handicapped automatically generates sympathy, which could be shameless in any other teen movie but doesn’t feel that way here.  J.C. is genuinely heroic in his loyalty to his friends. 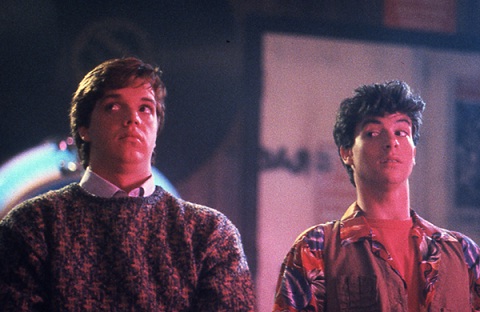 Really though, this movie belongs to Tom Atkins as the cranky, sarcastic detective.  As written, he’s a literal mix of the tough 1950s gumshoe with the bantering 1980s buddy-cop (old white guy edition).  He’s the guy who gets — and nails — the movie’s most famous exchange.  Holing up in a sorority house, he turns to a roomful of college lovelies and makes this announcement:

“I got good news and bad news, girls. The good news is your dates are here.” 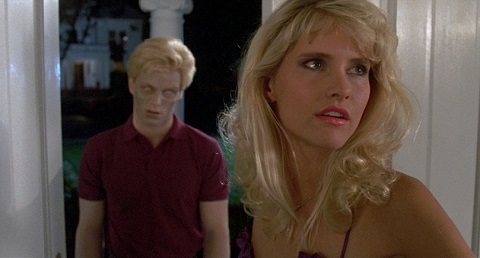 It’s a hell of a great man who can take a great line like that and turn it into movie-quote legend.  Tom Atkins is best known for his genre work, for John Carpenter in THE FOG and ESCAPE FROM NEW YORK, and then later for other directors in CREEPSHOW, LETHAL WEAPON, and MANIAC COP.  More recently he’s appeared in MY BLOODY VALENTINE and DRIVE ANGRY, and both times he’s been a sight for sore eyes.  The movies never seem to have enough Tom Atkins. 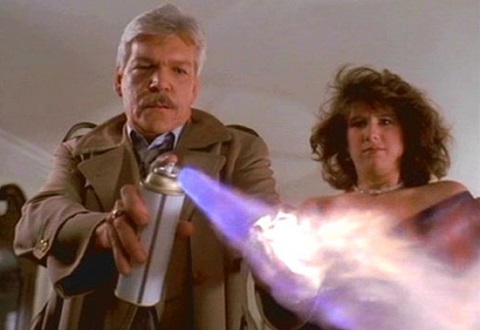 Movies could also use more of Fred Dekker, who made at least one more prized and revered cult item with his tribute to the Universal monsters: THE MONSTER SQUAD.   He provided scripts and ideas for several other films since his initial pair of mid-’80s cult classics, but it’s hard from where I’m sitting to get a firm handle on what he’s done since.  (IMDb doesn’t always tell the entire story.)  I’m only harping on this question because after every time I watch NIGHT OF THE CREEPS, I immediately want to see many, many more movies from Fred Dekker.  He’s my kind of filmmaker — funny, enthusiastic, informed, sly, puckish, able to toss out thoroughly memorable movie moments seemingly effortlessly. 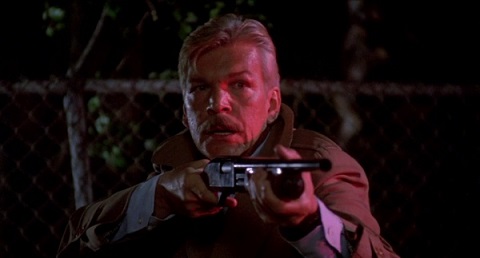 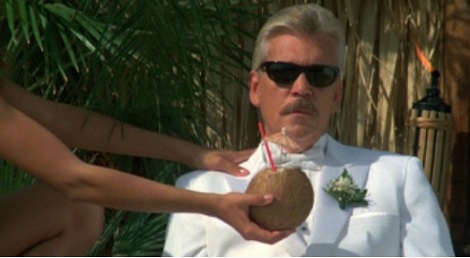