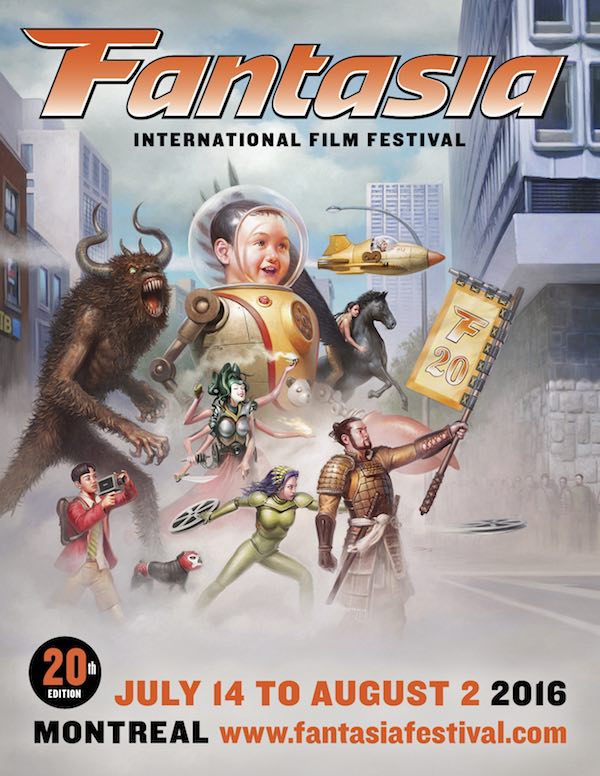 2016 marks the 20th anniversary of Montreal’s Fantasia Film Festival, the largest genre film festival in North America and one of the most prestigious in the world. To celebrate, the festival is going all-out this year with not only its standard gargantuan roster of films from all over the world (somewhere north of 130 features this year!), but also bringing in some very special guests. Guillermo del Toro is receiving the festival’s Cheval Noir award, and legendary Japanese director Takashi Miike is being given their Lifetime Achievement Award. Fantasia gets bigger and bigger every year, but even so this year’s anniversary program is insanely ambitious. Daily Grindhouse will be covering films screened at the festival throughout its run from July 15th to August 3rd. 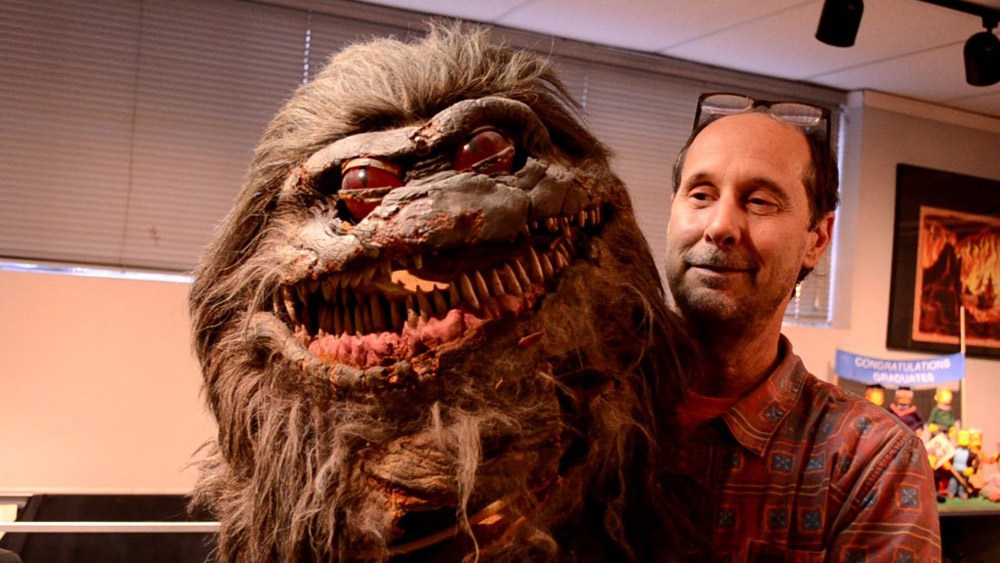 French filmmakers Gilles Penso and AlexandrePoncet clearly have a love for movie monsters. Their documentary CREATURE DESIGNERS takes an ambitious look at the history of creature design and special effects, with an impressive roster of talking heads including Rick Baker, Alec Gillis, Greg Nicotero, Phil Tippett, and Chris Walas and directors Joe Dante, Guillermo del Toro, Mick Garris, and John Landis. Everyone in front of the camera is vastly knowledgeable about the art and craft of their work, as well as their forerunners. The enthusiasm is infectious, and there is a lot of great behind-the-scenes footage peppered among the interviews. Hardcore horror fans probably won’t learn much that they don’t already know, but anyone who’s interested in how filmmakers and artists bring fantastic creatures to life in the movies will find plenty to like here.

A powerful criminal is shot in the head during a police operation, and he is brought to a crowded intensive care ward. Just before the operation to remove the bullet from his brain begins, he regains consciousness and refuses medical treatment. The officer in charge of the operation monitors the situation closely, and it soon becomes clear things are not as clear-cut as they seem. Johnnie To’s THREE starts off as a tense hospital drama before moving into an intense siege mode, setting up characters and conflicts for payoff in a satisfyingly outrageous finale in which all the film’s coiled tension explodes. THREE is a hugely entertaining thriller that should not be missed. 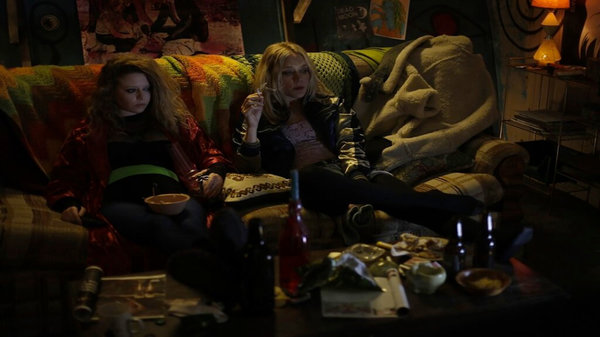 Hard-partying Lou (Natasha Lyonne) has a rough night while out at a party with her best friend Sadie (Chloë Sevigny) that she can’t quite remember the next day. Soon after, she begins to exhibit symptoms of an impossibly accelerated pregnancy. Meanwhile, Sadie’s ruthless drug dealer Gabriel (Mark Webber) has acquired something new he wants to sell on the street even though he doesn’t seem to know what it actually is. As Lou’s condition gets progressively worse, she meets a weird hippie named Lorna (Meg Tilly) who seems to know more about the situation than anyone directly involved in it. ANTIBIRTH is the latest film from writer/director Danny Perez, perhaps best known for directing the feature-length “visual album” ODDSAC for the band Animal Collective. It’s tough to get a handle on what this film is supposed to be until it’s nearly over, when things start to go seriously wrong for his deeply unsympathetic characters. Lyonne is compelling as always, but Lou is ultimately a hollow punchline. There are some flashes of surreal horror that hint at what Perez is really capable of, but the ironic detachment and blatant contempt for his characters make ANTIBIRTH feel like a messy collision between Todd Solondz indulging his worst instincts and juvenile horror shock tactics. Still, there are enough interesting moments here to warrant keeping an eye on what Perez does going forward.

In the 26th century, a crew of criminals has been hand-selected to take a dangerous mission to Mars: exterminate the cockroaches that were sent there in the 21st century to help terraform the planet and make it hospitable for humanity. Once they arrive, though, they find these aren’t standard-issue bugs—they have evolved into hulking, lightning-fast anthropomorphic monsters that look like a cross between roaches and bodybuilders. The criminals have unknowingly been genetically modified to fight the roaches with insect-based powers of their own, triggered by injecting themselves with a special formula. Based on a popular manga, TERRA FORMARS is the latest import from the legendary Takashi Miike. While it has occasional flashes of Miike’s trademark bizarre sensibilities, for the most part this is a fairly straightforward action/sci-fi film with a roster of barely distinguishable characters. Perhaps as a result of being an adaptation of popular source material, it also feels like the film starts at what would be any other movie’s 30-minute mark. Viewers are tossed in the deep end and expected to catch up. There are plenty of crazy visuals and some impressively weird character designs, but overall TERRA FORMARS is not particularly memorable. 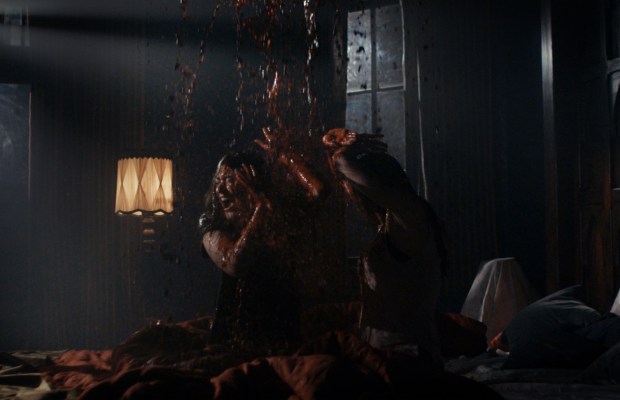 Harried, alcoholic detective Virgil is called in to investigate a strange situation at a sex club: a burned bed and a pile of bodies. While Virgil studies the scene and tries to figure out what happened, the action of the film splits off into a parallel line leading up to the police being called in. For his birthday, Ren wants to spend the night at the club with his girlfriend Sandy, his best friend Fred and Fred’s burlesque dancer girlfriend Nancy. Ren bribes the front desk clerk into giving them the only available room, which happens to be the one in which the centerpiece is a murderous, cursed bed that uses the darkest secrets of those who touch it to devour their souls. BED OF THE DEAD plays like a much more coherent take on DEATH BED: THE BED THAT EATS, and that’s not necessarily a compliment. The main characters in the film are all far too obnoxious to care about or sympathize with at all, a depressingly typical problem in horror films. There are some really cool practical effects, but they are sadly few and far between. This is doubly unfortunate since they really are the best part of the movie by far. 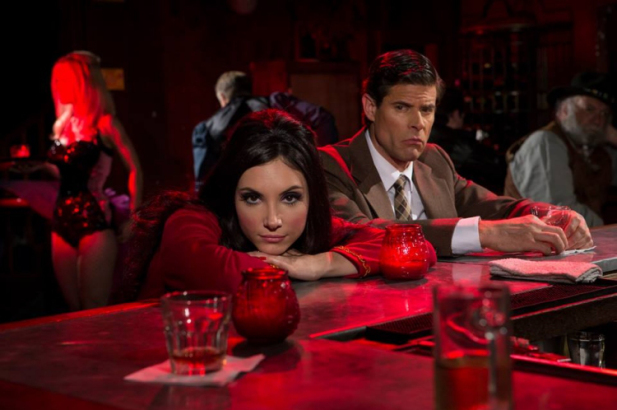 It’s been nearly a decade since Anna Biller’s debut feature VIVA, but the results speak for themselves. THE LOVE WITCH is an astonishing feature, shot and edited on 35mm, that displays once again Biller’s staggering talents. Elaine (Samantha Robinson) moves to a small town after the death of her ex-husband Jerry (Stephen Wozniak). Elaine killed Jerry, possibly accidentally, and is now obsessed with finding the perfect man using love magick. Her approach has some unintended side effects, though, including death, and soon the bodies begin to pile up. Anna Biller not only wrote, directed, and edited the film but designed the costumes and sets as well as composed songs for it. Her obsessive attention to 70s period detail is unparalleled, as well as her fluency in the visual language of exploitation films of that era: if you watched almost any given stretch of the film and didn’t know any better, you would absolutely believe it was made in the early 70s. This time, though, Biller has set the film in present day, using the idealized world of garish wallpaper, lurid paintings, lush soundtrack, and gorgeous costumes as a way of showing how Elaine sees the world. It’s a choice that adds even more depth to her trademark style of using signifiers of low-budget exploitation history to explore concerns about gender roles in modern society. It also happens to be a hell of a lot of fun. This is easily one of the best films of the year so far. 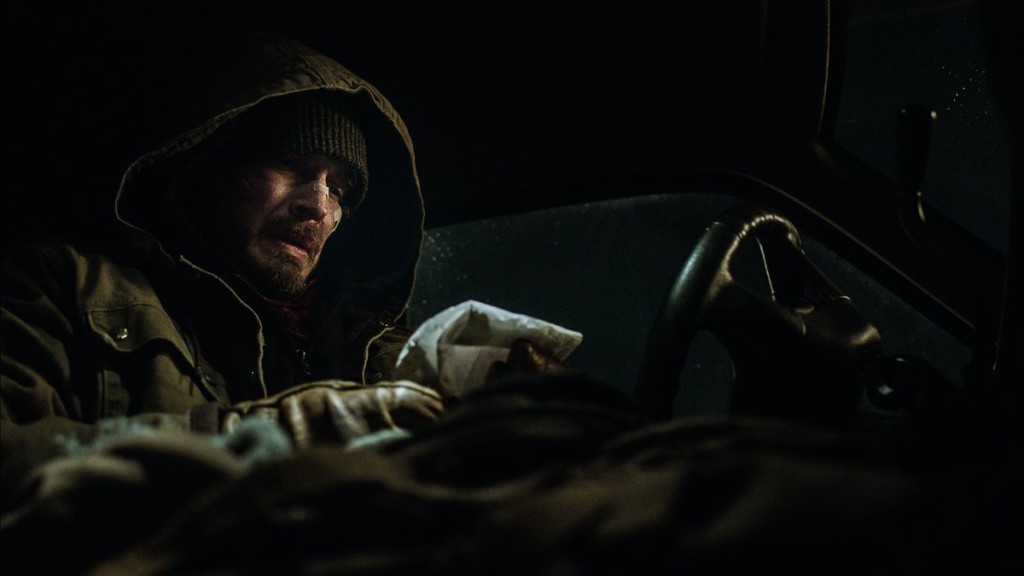 Former hockey player Bob Langmore (Aden Young) lives in a small logging town and works at the local mill. He keeps his head down and hides away from everyone, and it’s been years since he abruptly left his wife Darlene (Camille Sullivan) and their young daughter Eva (Julia Sarah Stone). As Eva approaches her high school graduation, her behavior starts to worry Darlene, who calls Bob to come back and visit Eva before her life runs completely off track. Bob reluctantly agrees, but when his truck is totaled he has no choice but to run an errand for a local drug dealer to get the money to make the trip. The situation is further complicated by the fact that Bob suffers from an inexplicable affliction, the thing that drove him away from his family in the first place, and the symptoms are getting much worse. THE UNSEEN is mostly a low-key blue-collar family drama with horror/sci-fi elements, putting it in a unique position as a genre film. The drama works thanks to the excellent cast, and the film walks a careful line between keeping their relationships and reaction to the more fantastic elements of the story grounded and realistic. 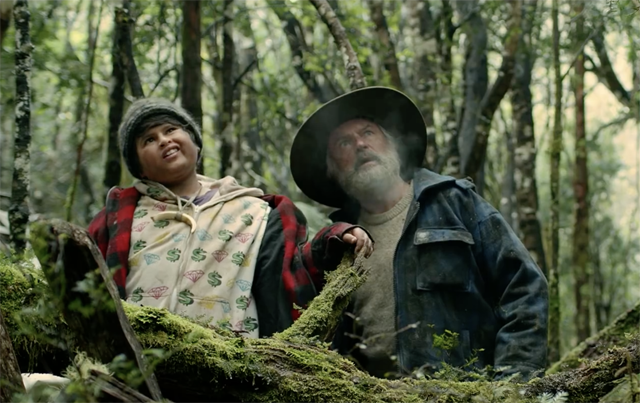 Ricky (Julian Dennison) is a troubled kid in New Zealand who’s been bounced around more foster homes than he can remember. When he lands in he remote home of Bella (Rima TeWiata) and Hec (Sam Neill), it’s his last chance. Bella is unfailingly cheerful and warm, but Hec is standoffish. Just when Ricky seems to be settling in, tragedy strikes and through a series of odd circumstances Ricky and Hec find themselves stuck in the bush. Hec knows how to survive off the grid, but little do they know there’s a search on for them. When they run into some hunters, a misunderstanding turns a search for a missing boy and his foster dad into a nationwide manhunt for a pair of outlaws. At its heart, HUNT FOR THE WILDERPEOPLE is a familiar story of a grizzled old man and a kid who grow to become friends as well as family, but it’s the specifics that make it so thoroughly charming. Sam Neill is great in his role as a prickly old bastard, and Dennison is hilarious as Ricky. It’s just as funny as — if not even funnier than — Waititi’s WHAT WE DO IN THE SHADOWS (co-directed with Jemaine Clement), which was one of the best horror/comedies in recent memory. HUNT FOR THE WILDERPEOPLE is a poignant, heartwarming, and hysterical buddy comedy. It’s kind of impossible to believe this guy is directing the new THOR movie next, but it’s also really exciting. 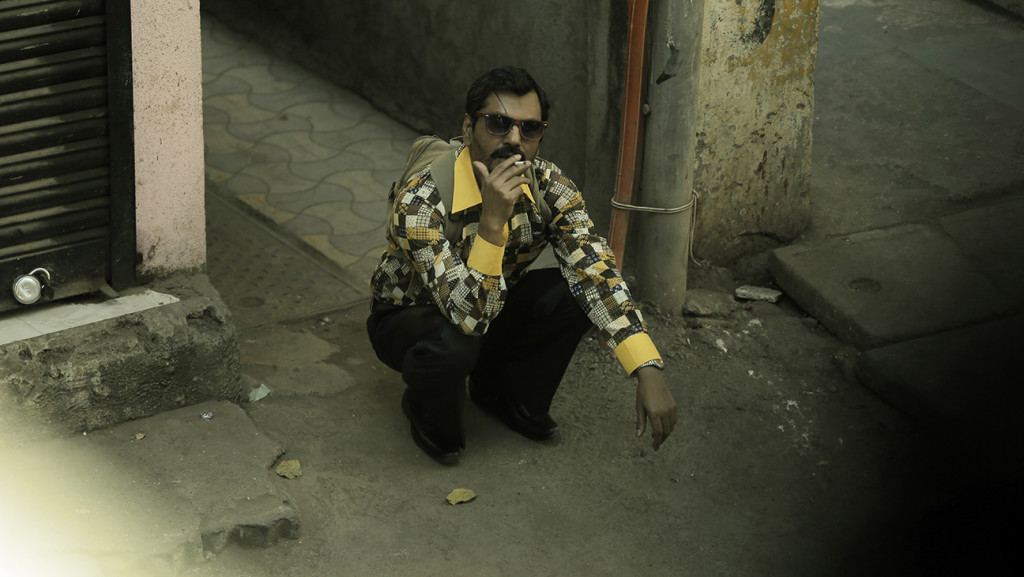 Deeply corrupt cop Raghavan (Vicky Kaushal) stumbles upon the body of his drug dealer and kills the man’s neighbor to cover up his involvement. He thinks he’s gotten away with it, but watching from the shadows was Ramanna (Nawazuddin Siddiqui). A relentless, cold-blooded sociopath, Ramanna believes he has found in Raghavan a kindred spirit: a man willing to use his power and the behavior and expectations of others to get whatever he wants. Ramanna starts leaving a trail of bodies in his wake, taunting the police and trying to push Raghavan over the edge. Anurag Kashyap follows his widescreen period crime epic BOMBAY VELVET with something much more gritty and immediate with PSYCHO RAMAN. This puts Kashyap back in the territory of his previous film UGLY, a bleak police procedural about the doomed search for a missing girl. PSYCHO RAMAN isn’t quite as depressing as that film, but it’s just as gritty and claustrophobic. Nawazuddin Siddiqui, who gave what would be a career-defining performance in Kashyap’s GANGS OF WASSEYPUR, one-ups himself as one of the most memorable and unsettling “villains” to come along in ages. It’s not fun, but PSYCHO RAMAN is a fantastic horror/thriller and another entry into Kashyap’s impressive oeuvre. 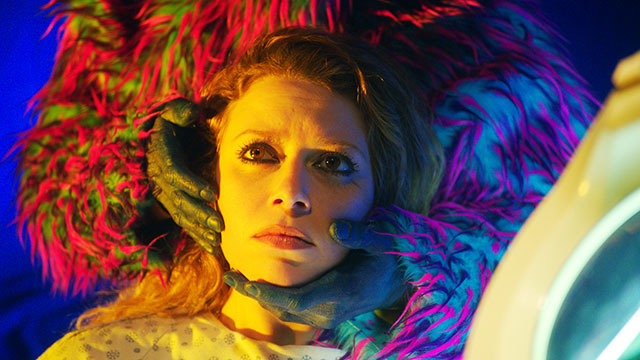