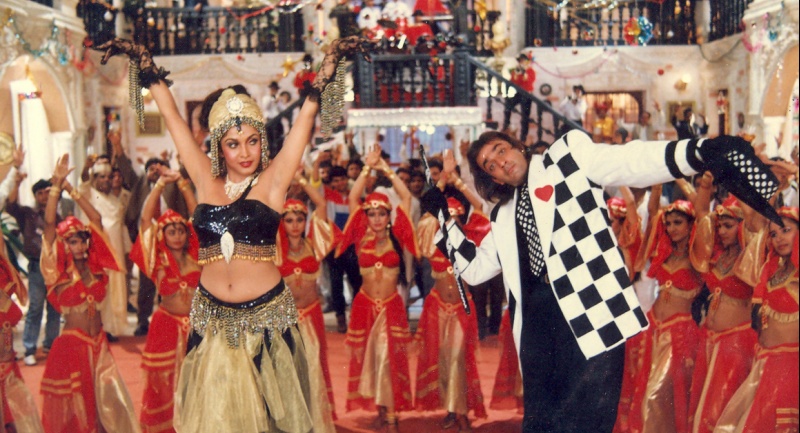 Highly successful career criminal/terrorist Ballu (Sanjay Dutt) is finally captured by the ambitious Inspector Ram (Jackie Shroff). But before he can pay for his crimes, Ballu orchestrates a daring escape, and Ram is back to square one. Ram’s girlfriend Ganga (Madhuri Dixit) goes undercover to help capture Ballu again, but as she gets closer to him and learns the story of his tragic life Ganga finds herself falling for the villainous rogue. KHAL NAYAK is the oldest film on this year’s Indian film repertory sidebar at Fantastic Fest, a massive hit in 1993 and a film that has been hugely influential in Indian cinema. Kumail Nanjiani was at the fest and did a brief intro to the film, talking about growing up watching Indian films in Pakistan with his family and how this film in particular made a big impression on him. It’s easy to see why: driven by a great performance by superstar Sanjay Dutt and packed with catchy songs and elaborately staged musical numbers, KHAL NAYAK is hugely entertaining. 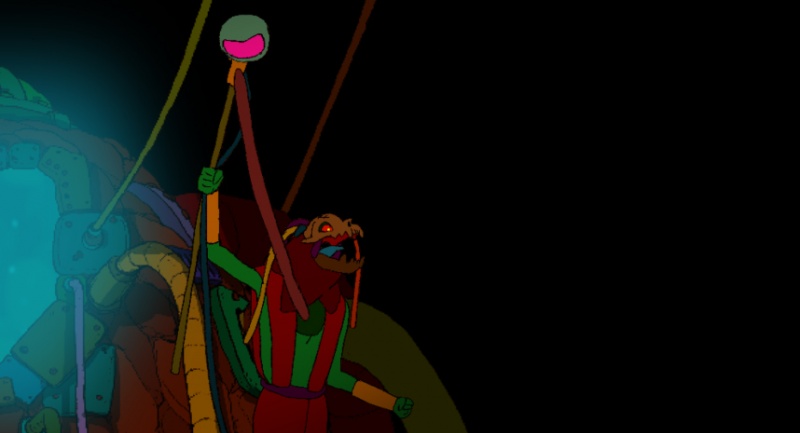 The evil hybrid human/animal Doctor Mindskull has been waging war against humanity, and his development of a secret superweapon is poised to tip the struggle in his favor. Desperate to stop him, the head of Earth’s military forces sends another hybrid creature to assist a human strike force. But when they uncover the secret of Mindskull’s ultimate weapon, the chase is on into the forbidden wastelands where Mindskull hides. NOVA SEED is a fun, fast animated sci-fi feature informed heavily by HEAVY METAL and the art of Jean Giraud (Moebius). It would be fun enough as it is, but the fact that director Nick DiLiberto made the entire film with a handful of other people (a few people make up the entire voice cast) is seriously amazing. It’s action-packed and slyly funny in addition to its impressive design. The use of vocal sounds instead of sound effects only adds to the handmade charm of the film, which feels like the sketchbook of an imaginative teenager sprung to vibrant life. 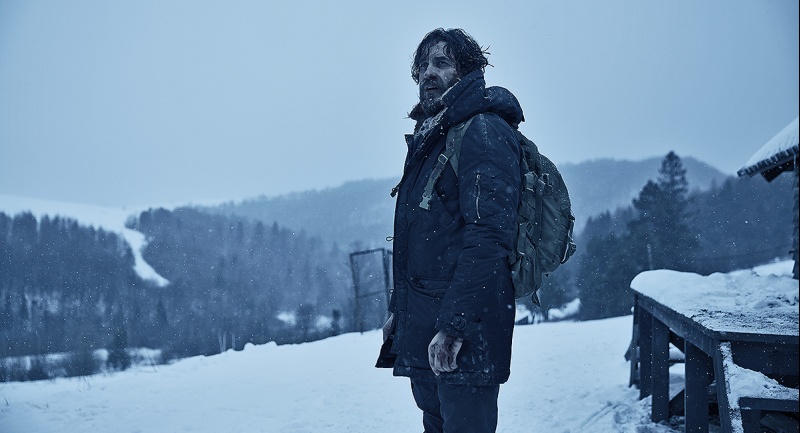 Mateusz (Andrzej Chyra) is dragging his two teenage sons on a “vacation” to a remote border station in the mountains between Poland and Ukraine. Shortly after they arrive, Konrad (Marcin Dorocinski) appears in the distance and stumbles into the station. Mateusz sets off into the snow to find Konrad’s party, leaving the boys to take care of the injured, freezing man. When Konrad wakes up, he quickly proves to be something very different from the victim of chance he appeared to be. THE HIGH FRONTIER is a tense, claustrophobic thriller that pits the intimidating and amoral Konrad against two very naive young men. It’s well-staged and shot, and Dorocinski is great as the devious Konrad. But the film drags a bit in the late running when it should be ramping up, and a pair of side characters who don’t have much impact on the story take up too much screen time. Director Wojciech Kasperski masterfully evokes the bone-chilling cold and the isolation of his unique location, making especially fine use of sound design to evoke the feeling of being trapped inside during a bitter snowstorm. It’s a solid, well-acted thriller, but ultimately it’s not terribly memorable. 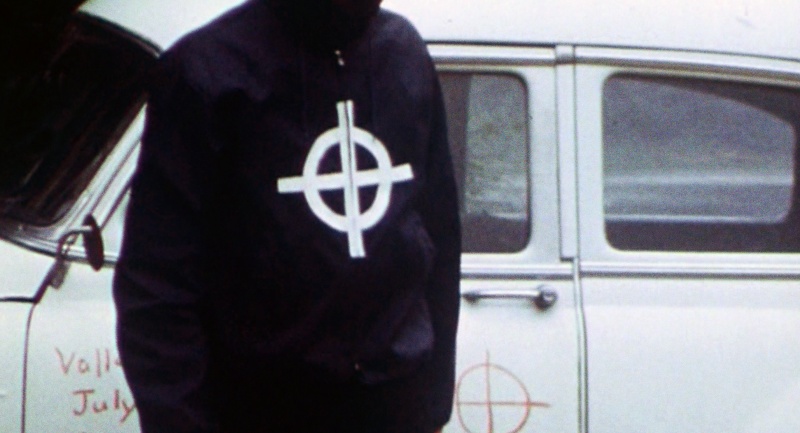 The American Genre Film Archive and Something Weird Video recently entered into a partnership to restore and preserve films from their vaults, kicked off with a crowdfunding campaign to raise funds for a 4K film scanner. The first product of that partnership is a new restoration of Tom Hanson’s bizarre 1971 film THE ZODIAC KILLER. The story behind the film is one of those one-in-a-million things that make so much of exploitation film history endlessly fascinating: Hanson, desperate to help catch the real-life Zodiac Killer, decided the best way for him to help bring the reign of terror to an end was to make this movie. He used some details from the actual Zodiac killings and mixed them liberally with wild invention and speculation, including depicting the killer wearing Groucho Marx glasses and a zippered hoodie with a large Zodiac logo on it. He also depicted the killer’s daily life as nearly a sitcom, interacting with lecherous old men and horny housewives when he’s not spending too much time talking to his pet rabbits. AGFA and Something Weird have taken a similar approach to preservation and restoration as home video imprint Vinegar Syndrome, attempting to replicate the look and texture of the film as it was originally projected from grainy film prints. The results are exciting, and give cult/exploitation film fans something to look forward to as they continue working through their archive of forgotten gems. 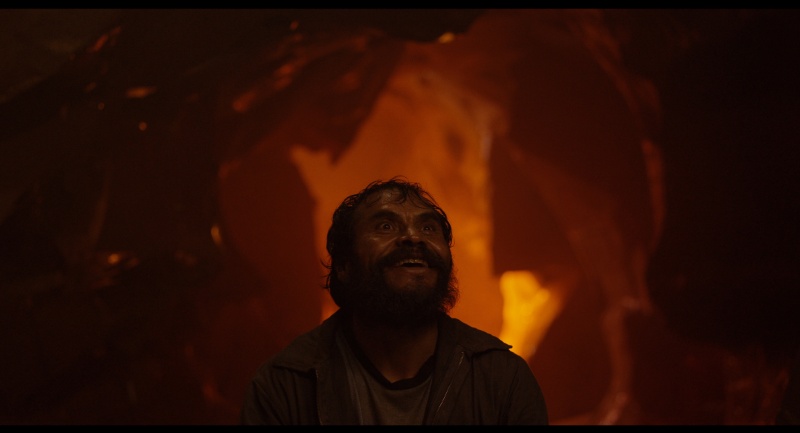 WE ARE THE FLESH (Mexico, dir. Emiliano Rocha Minter)

A lone man lives in what appears to be an abandoned warehouse where he trades junk items he scavenges from inside for eggs from someone on the outside. How long he’s lived here in isolation is unclear, but when a young man and woman appear seeking shelter he takes them in no questions asked. In exchange for letting them stay with him, the man asks them to join him on a mental and sexual odyssey. WE ARE THE FLESH straddles the line between narrative cinema and explicit performance art, documenting the process of turning the warehouse into a labyrinth of womb-like chambers and presenting explicit sex acts that appear to be at least partially unsimulated. The performances are fearless and the filmmaking undeniably artful, but anyone who finds explicit sex presented without a clearly defined purpose problematic will probably want to give this a hard pass. 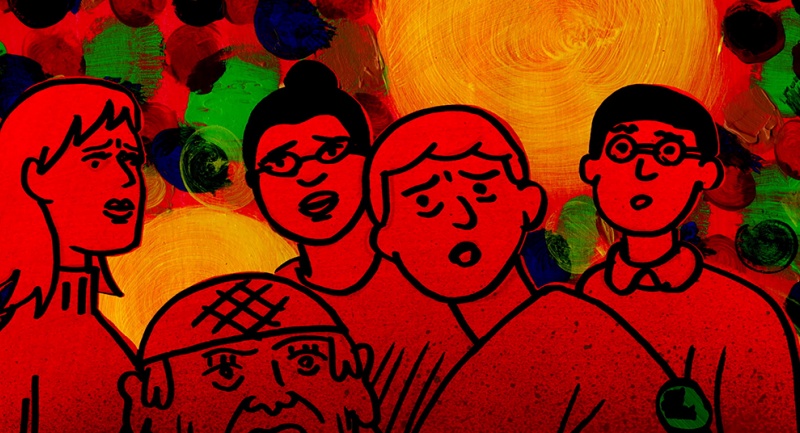 Dash (Jason Schwarztman) and his best friend Assaf (Reggie Watts) run the school newspaper with Verti (Maya Rudolph), but they’re having a tough time selling in a world where print is dead. Dash becomes jealous of Assaf and Verti’s budding romance and prints a new issue full of smear stories about them, which leads to a reprimand that prompts him to dig for a real story. He finds it in the dusty school archives: proof that the school’s principal falsified documents regarding the safety of the new gymnasium on the top floor of the building. Dash is sentenced to detention, and soon after the cliff on which the school is set breaks off and falls into the sea. Dash, Assaf, and Verti join forces with Lunchlady Lorraine (Susan Sarandon) to outrun the rising tide and escape the sinking building. Propelled by a bouncy score by Rani Sharone, MY ENTIRE HIGH SCHOOL SINKING INTO THE SEA is fast-paced and very funny, with great work from its voice cast. Comic artist Dash Shaw has made an impressive debut feature here, splashed with vibrant color and charmingly hand-drawn and painted. It’s beautiful to look at, especially on the big screen.