I always have a tough time with documentaries that rely too heavily on staged recreations of events. My thought process is usually, “if staged footage takes up more than half your films, why don’t you just craft a narrative film out of the story?” BELIEF is yet another example of this type of film. But that is not to say that director David Stubbs has not put together a disturbing, downright upsetting film. 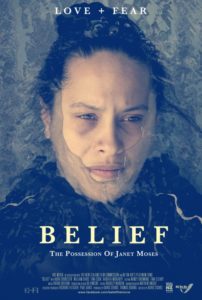 BELIEF tells the story of the titular young Maori woman killed by her family during a makeshift exorcism in 2007. The outcome is never in doubt. From the opening scene when Janet’s aunt (who was not involved in the exorcism) describes her in the past tense and worries about the day Janet’s daughters ask what became of their mother, Stubbs lets the audience know this is going to be a tragedy. Of course, it is probably best that Stubbs does not withhold information to create a false mystery. Janet Moses’ death and the resulting manslaughter trial of several of her family members is well known in New Zealand, so it is admirable restraint on the part of Stubbs to avoid any attempts at suspense. What is left is for the tale to simply be told with an ever-escalating sense of impending doom that is—if the depression I was left with is any indication—maybe too well developed.

Using courtroom transcripts and the police interviews with the family, Stubbs recreates not only the events leading up to the exorcism, but also the actual ceremony and the police interviews with key family members. While Stubbs has every opportunity to create a narrative of modern psychiatry/medicine versus religious beliefs handed down through a culture, he avoids that relatively easy story. Instead, he presents a mostly levelheaded extended family that is very tight-knit and incapable of coping with the sudden mental breakdown of one of their happiest members.

Viewing the story from the remove of several years and a different culture, I initially was angry and frustrated with Moses’ family. It is fairly clear that the symptoms she initially exhibits point to severe depression. Her grandmother recently passed away and her boyfriend (and father of her children) had cheated on her, leaving her without two of her main supports in life. From the police interviews, the first time that anyone in the family noticed something was wrong with Janet was when she was sitting by herself, miserable at a cousin’s birthday party. Considering everything she had recently been through, it made sense to me that she would be a wet blanket at the party. But her family members just found it disconcerting that the carefree young woman they were used to might actually feel down.

But as the film goes on and the mixture of borderline co-dependency between several family members, the loss of a clear leader with the death of Janet’s grandmother, and the family’s muddled understanding of specific Maori spiritual beliefs (watered down by and mixed in with European Christianity) makes it clear that this family knew of no other way to handle Janet’s increasing darkness than to close ranks. By the time she had begun to display signs of schizophrenia, events were already beyond the point of no return. The belief that she was cursed and eventually possessed by a sinister spirit was shared by too many among the family. Growing hysteria among the family elders that spread to the children pushed the homemade exorcism forward with alarming speed.

Stubbs stages the exorcism and hysteria among the family for maximum horror. The sight of Janet (played in the recreations by Kura Forrester) having gallons of water forced down her throat while people who love her rhythmically chant and stomp the floor is terrifying. The cinematography, acting, and special effects involved in recreating these horrible moments are all stellar. But nothing in the film is quite as disturbing as actual police interrogation footage of one of Janet’s teenage cousins, describing what was done in simple, blunt statements.

Personally, I feel like the story of what happened to Janet Moses is horrifying enough that it does not need the slickly produced recreations that Stubbs is presenting. But if you do not mind the extreme visuals he uses to boost the horror elements, BELIEF is a hard film to shake.