PHANTASM RAVAGER had its world premiere only hours ago at 2016’s FANTASTIC FEST and Phanboys MATT WEDGE and MIKE VANDERBILT simply couldn’t get to bed before they discussed the fifth and final entry in Don Coscarelli’s sci-fi horror series. 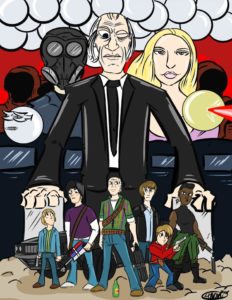 MATT WEDGE: It is hard for me to write a review of PHANTASM: RAVAGER without acknowledging my own nostalgic connection to the series as a whole. I suppose this is not something I need to explain after writing my lengthy piece on the mythology of the PHANTASM films. (My first reaction when I heard that RAVAGER was on its way was one of trepidation. I strongly felt like OBLIVION was the proper ending for the franchise. Yes, it was a sad ending, but it wrapped up the thematic idea that you can never outrun death in a melancholy, satisfying way that allowed Mike a chance to finally stop fighting and let Reggie continue being the selfless hero.

But then I saw that first trailer for RAVAGER and got that image of a giant sphere facing down Reggie and I got chills. It was a savvy bit of marketing that made me really want a new PHANTASM  film, even against what I suspected was my better judgment.

What were your thoughts/concerns going into RAVAGER?

MIKE VANDERBILT: I was excited when the first trailer for RAVAGER premiered back in December of 2014. It appeared that audiences were going to finally get the epic battle between good and evil that the series had been leading to (and promised with Roger Avery’s un-produced PHANTASM: 1999), a sort of RETURN OF THE JEDI of horror films. I’ve always thought of PHANTASM as the STAR WARS of horror as the films deal with similar themes: friendship, family, death, good, and evil.

RAVAGER is not necessarily the movie I wanted or even expected, but at the end of the day, it very much felt like PHANTASM and I think time will tell its legacy. To compare RAVAGER to another classic film series, it’s kind of like GODFATHER III which Coppola perceives more as an epilogue than a true final chapter.

MW: It definitely feels more like an epilogue than a final chapter. I think the frail condition of Angus Scrimm when they were shooting the film contributed to the lack of a RETURN OF THE JEDI final battle since he was probably not physically capable of pulling off anything too strenuous.

That said, the glimpses of action-horror we get in the “wasteland” sequences seemed to be pointing to that idea of an epic final battle that never comes. But I’m sort of okay with that because those scenes don’t feel like PHANTASM to me. I was more drawn to the scenes of Reggie dealing with aging and his inability to determine which world/dimension he was in. It took the series back to the nightmare logic of the first film. I feel like RAVAGER captured that feeling better than any of the other sequels.

MV: RAVAGER certainly sits nicely alongside OBLIVION. It’s not without its moments of levity—mostly coming from Bannister and his old time rock ‘n’ roll swagger—but is not silly like LORD OF THE DEAD. I do agree, that I enjoyed the scenes with Reggie dealing with growing older are wonderful and borderline heartbreaking particularly when looking back at the series’ themes of death and loss. Seeing our favorite characters age drives home the point that death is inescapable and perhaps gives us a sense of our own mortality.

One of the best scenes in the film is when Reggie and The Tall Man come face to face (like DeNiro and Pacino in HEAT) and again, set up that final battle that never really happens. We do get a few nice touches of big action and cool visuals in the sequences that take place in a world where The Tall Man and his minions took over (the giant sentinel sphere destroying a high rise and the armored “Battlecuda” and seeing that car return is as important in a PHANTASM film as Mike, Jody, and Reggie.

MW: I’m with you when it comes to the importance of upping the destructive abilities of the spheres and bringing out the ‘Cuda. This is a series of films that relied heavily on its own brand of iconic imagery (side note: I wish Plymouth muscle cars were still being manufactured just to have a series of commercials with Bannister waxing rhapsodic about “American muscle”) and those spheres and the Cuda were big parts of it, contributing to the nostalgic kick the film had at points.

I loved the “Battlecuda” and the other moments–mostly dialogue–that called back to previous films. But you’re right that the scenes of Reggie and The Tall Man facing off eventually led to something we never got. But does the absence of that climax take away from the emotional impact that the film manages to conjure just from bringing together the core cast members one last time? Personally, I’ve always been more invested in the characters than any action beats the films touch on.

MV: I loved all of the moments of the characters coming back together. There are very few horror film series that have both the heroes and the villains returning from episode to episode and that’s one thing that makes PHANTASM so special. The more I think about RAVAGER, the more I dug it. I think a lot of the film’s problems (too many scenes of characters walking silently with a gun, more than a few cheap looking effects) come from having a first time director at the helm. The use of handheld digital cameras—which is just how low-budget movies are going to look these days—will take long time fans like us out of the picture. That first film has such a great ‘70s warmness too it, the digital visual aesthetic feels very cold and is unforgiving to SFX. Also, without having Coscarelli at the helm, it is going to have a different feel. Enough of it worked for me though to recommend it to fans of the series and I think a lot of the vitriol I’m seeing around FANTASTIC FEST comes from people who had ridiculously high expectations for the fifth film in a franchise that the creator felt got wrapped up in the previous 20 year old entry.

MW: Not having Coscarelli at the helm was felt. Nothing against David Hartman, who I think did the best job he could under the circumstances of taking over a beloved franchise from its originator, but the film felt a little too much like an effects reel at times. Unfortunately, the low budget didn’t provide them with the kind of effects work they needed to create the massive action-horror film that Hartman seemed to want to make at times. Despite his status as a first-time director, I thought he made a lot of good choices with the character beats by letting the actors who know those characters best take the reins of their scenes. Bannister, in particular, carries a lot of the film with his heart and humor and Scrimm remains a commanding presence, even in what was clearly a frail state. The more we talk about the film, the more I like it. It still looks and feels a little like a fan film to me, but Mike, Reggie, Jody, and even The Tall Man have been the elements that kept fans coming back over the years. If we have to put up with some sub-par effects to get these guys together one last time, I’m okay with that. I suppose I will simply look at OBLIVION as the end of the story and RAVAGER as a tribute to everything this group has accomplished over the last 37 (!) years.

MV: Overall, RAVAGER has some cool stuff and it’s great to have the band back together one more time. Honestly, the biggest problem I have is that when the final battle occurs with The Tall Man, it’s not Reggie, Mike, or Jody that save the day but rather a second tier newly introduced character. Everything else that came before that final trip to the red dimension would have carried more weight and given the film (and the series) a real emotional payoff for me, but those scenes in the hospital with the two leads give the film a different sort of ending, and perhaps a completely different way to look at the series as a whole. There’s plenty to like about PHANTASM RAVAGER and its legacy (like plenty of genre films) will speak for itself in another 40 years.

PHANTASM RAVAGER will be released on VOD and in select theatres on October 7th.