The debut feature by writer/director Liam Gavin, A DARK SONG is a deceptively simple tale of the damage that grief can do to the psyche. It is also profoundly difficult to watch at times and creepy as all get out once you get by some of the goofier dialogue exchanges in the first act.

Sophia (Catherine Walker) is a desperate woman. Still reeling from the kidnapping and murder of her young son, she researches an intense occult ritual that will allow her to speak with and apologize to him for not being able to pick up from daycare on the day he was taken. She seeks the help of Joseph (Steve Oram), an expert in the occult who claims to have performed the ritual three times, but only had it work once. Paying him an exorbitant fee and with the understanding that he will also get to ask for something from the higher powers that they contact, Sophia begins the grueling months-long process of completing the rite. 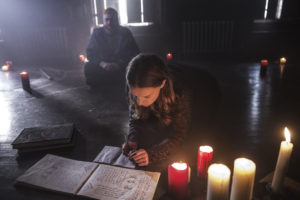 But what kind of a person seriously and truly believes in occult powers and is willing to risk their life and soul by performing a dangerous rite? How trustworthy can that person be, especially when they have to be relied upon to be one hundred percent honest and pure with their intentions? You should know the answer to that question without me providing it to you.

Joseph does not trust Sophia right from the start. It does not take much questioning for him to start poking holes in her story. When he does, he browbeats her with threats of all the things that could go wrong if she does not enter the ritual “pure” and “honest.” But Joseph is not exactly a paragon of truth and virtue. He claims that he has his drinking under control, despite the fact that he is shown going through DTs and hiding a bottle of whiskey in his dresser. If Joseph is lying about that, how good are the odds that he can be trusted to tell the truth about the ritual and if it is real or a fairy tale to which desperate people cling? 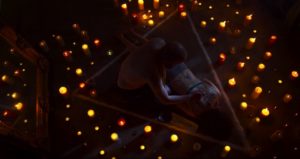 In case you had not yet noticed, A DARK SONG rides on the backs of its two leads. Walker and Oram are terrific, sharing a prickly chemistry and managing to shift from sympathetic to monstrous and back again. Sophia and Joseph are very, very damaged people and the actors never forget that. The roles are not glamorous and ask a lot physically and psychologically of the performers. But they both rise to the challenge, even when the film gets a little wonky at times with straight-faced talk about guardian angels and the significance of patterns and numbers in life and scripture.

I would hesitate to call A DARK SONG an entertaining movie, but it is quite unsettling and goes to some brutal places before a resolution that is unexpectedly hopeful. Gavin’s control of the difficult material and the stellar work by Walker and Oram make that ending feel earned and not like a manipulative attempt at uplift.