Writer/director Gerard Johnstone made waves in 2014 with HOUSEBOUND, a horror-comedy that was a blast of pure entertainment. I was so happy with that film, it made my “Favorites” list for that year. So when I spotted his name as the writer/director of TERRY TEO, it became a must-see title for me. I could not wait to find out what he had up his sleeve as a follow-up. It turns out he had a TV show up his sleeve and I just watched four episodes of it. Ahem.

Here is the part where I sound like a pretentious snob and explain that I am not much of a television viewer. TV series tend to frustrate me. I like self-contained books and movies that give me a complete story that (usually) do not leave me hanging. Series get cancelled, change show-runners, and arbitrarily write out characters when it becomes too expensive to keep around the actor playing them. I know that most people believe we are in a new golden age of television, and I tend to believe them when they say that, overall, TV shows are now higher in quality storytelling than movies. But I just don’t have the time to devote to TV. All of that is to explain why I was annoyed to get hit with four episodes of a TV show when I thought I was getting a movie.

With that disclaimer out of the way, what did I think of TERRY TEO? 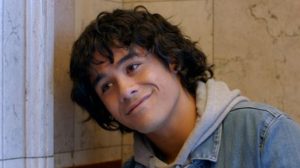 Not surprisingly, with Johnstone at the helm, I enjoyed it. As a writer, Johnstone has a witty way with dialogue that flirts with self-awareness at times, but never becomes coy. The overarching story of the titular character (Kahn West) and his transformation from teenage cat burglar to crime fighter in the wake of his policeman father’s murder is slick, touching when it needs to be, and usually amusing. The cast is likable (especially West) and the cinematography and editing give it a cinematic sheen. In tone and plot, it reminded me of a more kid-friendly version of Veronica Mars. And coming from me, that is pretty high praise.

Johnstone also has fun adapting this character for a new generation (The Adventures of Terry Teo was a cult TV series that aired on New Zealand television in the mid ’80s). He takes old music cues that I assume are from the original series (sometimes I feel hopelessly ignorant about pop culture from other countries) and uses them at key points before sliding into a hip hop theme that is bouncy, fun, and only a little cheesy—sort of like the show itself. Because the core cast is the actual age of the teenagers they are playing, Johnstone gets away with some scenes and storylines that would be laughable if twenty-something actors were trying to sell it. It is easy to believe how naïve Terry and his friends behave when you see how young they actually are. I wish more movies and, yes, TV shows would follow this example.

Despite everything positive I have to say about what I saw of TERRY TEO, I would not blame anyone for calling me a snob for complaining that it is a TV show. I know I should be more open-minded, but I cannot help but feel disappointed by the traditional TV beats and inevitable cliffhanger ending that is clearly a set up for the next season.