The last thing you expect when you go into a new Chan-wook Park film is to be highly entertained. I do not say that as a slight to one of the finest directors currently working in world cinema, merely that his particular brand of carefully constructed, shot, and edited films lend themselves more to unexpected moments of pure beauty in between scenes of brutal violence and psycho-sexual abuse. THE HANDMAIDEN has those elements present, but it is far more playful with several big laughs and a tone that borders on breezy in places. 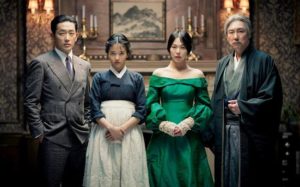 Based on the novel FINGERSMITH by Sarah Waters, THE HANDMAIDEN centers around an elaborate attempt to dupe a young woman out of her fortune by a con artist who calls himself Count Fujiwara (Jung-woo Ha) and his apprentice Sook-Hee (Kim Tae-ri, very funny and moving as she carries the film). The details of Fujiwara’s plan and how Sook-Hee fits into it are best left to be revealed as the film unfolds, but it should come as no surprise to anyone who has seen a con artist film when Sook-Hee develops affection for Lady Hideko (Min-hee Kim), their mark, and that Lady Hideko is not quite as naïve as she first appears. 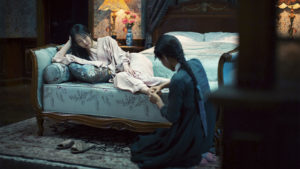 Told at the slow-burn pace that is to be expected from a Chan-wook Park film, THE HANDMAIDEN is told in three parts. The first part is told from the perspective of Sook-Hee as she is drawn into the con and discovers her attraction to the frail Hideko. The second part is told from the perspective of Lady Hideko and not surprisingly, turns everything from the first act on its head. The third part is an extended wrap up that details the fallout from the con as the tone veers from swooning romance to grisly, bloody violence in a heartbeat. But the film is never far away from a comedic beat or a darkly ironic turn for one of its many duplicitous characters. 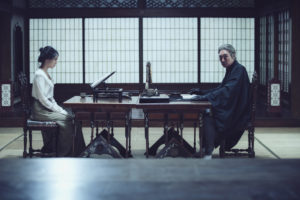 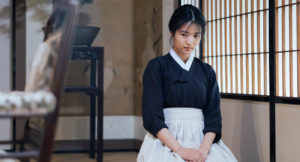 While THE HANDMAIDEN feels like a departure from the usual for Chan-wook Park, it is still clearly his film. There is the usual fetishizing of small details, classical editing, fluid camera work, and carefully framed shots that he has come to be known for. And, of course, there is an octopus. In many ways, it feels like the most mainstream film he has made and probably will make. If that is the case, he has delivered beautifully.