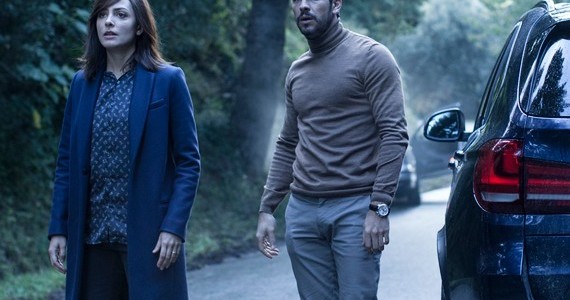 In the opening scene of THE INVISIBLE GUEST, Adrián Doria, a successful technology entrepreneur, meets Virginia Goodman (Ana Wagener), a cold-blooded trial attorney who has never lost a case. It takes only a couple of minutes for it to be established that Adrián has been charged with the murder of his mistress, Laura (Bárbara Lennie). Virginia informs Adrián that his regular attorney has referred his case to her because he needs the best to get him off the hook. Despite Adrián’s protests that he is innocent, Virginia reveals that the prosecution has uncovered a new witness and that the judge in charge of the case will most likely call him in to testify in three hours time. She tells Adrián that she needs him to lay out exactly what happened with absolute truth, since they only have a limited amount of time to formulate a defense strategy. She then starts a stopwatch and places it on the table for emphasis. Yes, it is that type of self-aware thriller and I enjoyed the hell out of it for that tongue-in-cheek touch and many others just like it.

After that fun opening, the film goes back and forth between flashbacks as Adrián tells Virginia his story and the present day as she pokes holes in every version of events that make him sound like a saint who is being framed by some unknown party. As a mystery being retold by an unreliable narrator, it is not surprising when Adrián keeps changing his story each time Virginia catches him fudging a fact or leaving out a detail that makes him look bad. When he finally confesses that the reason he is lying is because he knows exactly why someone would want to frame him, but he cannot reveal those details for fear of going to jail for a separate crime. From there, things only get crazier as the film piles revelation on top of revelation.

Writer/director Oriol Paulo moves the film along so quickly, the audience never has a chance to notice how many of the plot twists rely on coincidences and characters withholding crucial information. But to me, that is a sign of a good director. His script is intricately plotted out and he executes it with the panache of a film geek who has watched too many Hitchcock and De Palma films. I mean that as a compliment.

And that is what is fun about THE INVISIBLE GUEST. Paulo acknowledges that this is a story that has been done before, but he charges ahead and makes his little B-movie as fun and stylish as he can. There is a pleasure to watching the plot unfold like clockwork and see the clichés of this type of film presented in such a literal, visual manner. By the time a character is behaving like a femme fatale and then is next shown dressed like a character straight out of a ’50s film noir, I wanted to stand up and cheer. THE INVISIBLE GUEST never takes the audience anywhere new, but it does revisit a genre and sensibility that I love, so I was more than happy to go there again.