It’s sad to think the first half of Austin, Texas’s Fantastic Fest has already nearly come and gone, and here have been a few highlights for me:

THE RED TURTLE (dir. Michael Dudok de Wit)
Here is an animation collaboration with some of the finest names in the industry (Studio Ghibli, with supervision by Jean-Christopher Lie of THE TRIPLETS OF BELLEVILLE  and Isao Takahata of THE TALE OF PRINCESS KAYAYA) that still manages to feel entirely its own. This wordless tale of a man who washes up on a deserted tropical island communicates all it needs to through pure visual poetry.
When the persistent man tries to escape only to find his moves blocked again and again by a giant red tortoise, he resorts to an act of violence only to find his barrier is not what it seems to be. When he find a mysterious stranger on the island who compels him to stay, they manage to live in harmony with the island and even raise a son until unforeseen events arise.
With no dialogue to work with, Michael Dudok de Wit wisely utilizes the cast of nature itself on the island to its fullest extent, and one of the themes that emerges from the film (typical of Studio Ghibli) is that of man’s coexistence with nature. When the nameless man tries to react to nature with violence or force, he is met with resistance, but when he harmonizes with it, he is nurtured by gifts. Little crabs scuttling along the beach, or turtles popping up underwater, take on the immense ramifications of living beings to be reckoned with, with every sound effect and movement heralding their deep and overlooked importance.
THE BAD BATCH (dir. Ana Lily Amirpour)
You have to admire director Ana Lily Amirpour. Her vision is entirely her own, and much as she somehow put a twist on the overworked vampire movie with her skateboarding Iranian in A GIRL WALKS HOME AT NIGHT, she somehow finds a fresh take on sci-fi dystopias with THE BAD BATCH. This film portrayed elements that are reminiscent of MAD MAX, yet with unique flourishes like a so-called dream community led by Keanu Reeves, and a batch of cannibals that is less merciless and more survival-driven than it seems at first glance.
When Arlen (Suki Waterhouse) is stranded in the desert after being imprisoned, she becomes a typical strong Amirpour heroine as she learns to navigate her hostile environment and do what she needs to survive. In this process, she learns that allies and enemies are not what they seem at first glance, and that other survivors in the desert have resorted to ugly measures she may have to rely on to make her way.
Amirpour’s film is visually stunning, bringing every wayward character in this demented western to life, and includes a typically iconoclastic soundtrack that merges with the scenery, further bringing the worlds of her frighteningly self-assured imagination to vivid life on the screen. 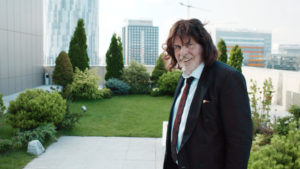 TONI ERDMANN (dir. Maren Ade)
A nearly three-hour-long German comedy about a strained family relationship coming to terms doesn’t sound like a typical Fantastic Fest entry. Somehow, however, Maren Ade’s third feature contains more bizarre moments of unexpected humor than many films screened at the festival.
The film’s strength draws a lot from its two leads Peter Simoischek and Sandra Huller, who beautifully fulfill very demanding roles as a father and his daughter. The father is so desperate to save his daughter from a life of drab and dreary business meetings and dinners that he adopts an alter ego, Toni Erdmann, a sort of clown, who playfully begins to intrude into this aspect of his daughter Ines’s life. This results in awkward comedy from both angles: when Toni Erdmann tries to navigate his daughter’s foreign world of corporate-speak and professional graces, and when Ines tries to incorporate him or explain him away without embarrassment.
Over the course of the film, as in any good human drama of this nature, the characters end up changing in ways that feel hard-earned and never too sentimental. One of the film’s most memorable sequences arrives in a perfect visual metaphor for Ines learning to loosen up a little bit. Since true changes on this nature take time, the film doesn’t seem to wear out its running time, and most viewers will become so invested in the balancing act between the two magnetic leads that the length will be a non-issue anyway. 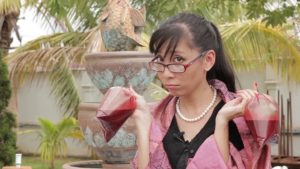 DEAREST SISTER (dir. Mattie Do)
Forget for a moment that Mattie Do is the only female filmmaker and the only horror filmmaker to hail from the Marxist state of Laos, and that DEAREST SISTER is one of only thirteen films to ever be made in Laos. The film would be an accomplishment just be those standards alone, but Do actually makes compelling films that combine traditional ghost stories with plenty of class and cultural commentary, too.
Dearest Sister concerns a poor village girl Nok, who travels to the Lao capital Vientiane to help her rich cousin Ana who is mysteriously losing her sight. Ana just happens to be married to a white man, and Nok is told she should find a rich white boy to marry in the capital as well, so she will be taken care of.
Few things unfold in the story the way you would expect them to. Ana beings having visions where she sees the dead as she loses her sight, which is predictably classified as mental illness by her husband Jakob and a possible gift by Nok. But Nok, who we initially feel sympathy for, turns out to want only more money once she gets a little taste for it. Meanwhile Ana treats Nok as a second-class citizen in her home, not allowing her to go out and insisting she follow all her rules.
All together, the tension between the characters and the home grows and reveals a portrait of the capitalist dream unraveling, as Ana, who has everything she should want, cannot keep control of anything including her sight, and Nok is having a hard time climbing the social ladder she so desperately wants to scale. Do seems much more interested in observing these class and cultural barriers than in developing her ghost story, but when the dynamics are this fascinating it’s hard to complain.