This article contains spoilers for SPLIT.

The secret screening at this year’s FANTASTIC FEST was the world premiere of the new M. Night Shyamalan thriller from Blumhouse Pictures. It goes without saying that Shyamalan is a divisive filmmaker; some love him, some hate him, and many people really seem to want to see him succeed. Shyamalan has certainly milked an outstanding amount of goodwill from two films: Most film fans seem to agree that THE SIXTH SENSE and UNBREAKABLE are classics, and his other films have their fans as well. (This writer digs SIGNS.) Despite some fine talent involved in SPLIT, the film is a disjointed, borderline offensive mess, featuring a hacky, over-the-top performance from James McAvoy, and an ending that feels like a cheat and a tease.

SPLIT features James McAvoy as Kevin, a man with 23 distinct personalities who kidnaps three teenage girls in a terrifically creepy and compelling opening. The sequence suggests that Shyamalan may be on the right track, either with a return to form or perhaps a simple, creepy Blumhouse release. Unfortunately, it’s all downhill from there. Much is being made of McAvoy’s performance, which is being heralded as brave and amazing. I live in Chicago; if I want to watch an improv kid’s YouTube reel, I can swing on down to Second City and just pluck one out of class. McAvoy is all accents, funny voices, and occasionally a dress. I think that audiences and critics these days are a little too quick to deride something as problematic, but the scenes with McAvoy in a dress feel borderline offensive, particularly in the era of trans acceptance. SPLIT feels like low-rent DePalma (or third-rate Hitchcock), but Shyamalan lacks that voyeuristic quality that DePalma brought to his films. Where DePalma seemed truly fascinated and compelled with Michael Caine’s transvestite psychopath in DRESSED TO KILL, Shyamalan appears to be playing it for laughs, appealing to an audience who would love a movie because “it’s so twisted” or “it’s such a mind fuck.”

The film meanders around for 116 minutes with no real direction, showcasing asides with Anya Taylor-Joy, Jessica Sula, and Haley Lu Richardson attempting to escape the clutches of the villain, scenes of psychological exposition seemingly lifted from DRESSED TO KILL and RAISING CAIN with Betty Buckley as Kevin’s psychiatrist, and an odd, tacked-on molestation subplot that, like most of the film, doesn’t go anywhere. The third act introduces some bonkers, Lovecraftian mythology and supernatural elements that suggest the film may go off the rails and redeem itself, but it all feels halfhearted. 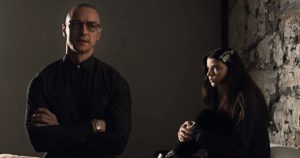 This is a Shyamalan joint and yes, there is a twist. But it’s simply a cheat to the audience, allowing a film with no real resolution to go out on a high note that is completely undeserved. The end tag, in a way, almost negates any positives (which are few and far between) that came before. It’s not fair to an audience to deliver a 116-minute film that’s only good for one of those said minutes and discussing it at any length could be considered a massive spoiler. It’s a garbage goal and a garbage win.

In the end, SPLIT is ultimately frustrating. Shyamalan is a filmmaker who I believe in; he has a great visual eye and can create compelling tales, but his reliance on always having to deliver a surprise seems to be his downfall. When his name flashed on screen, I maintained positive disposition—especially it being a Blumhouse production—and SPLIT didn’t deliver. Maybe next time.