As he has aged, I find Jean-Claude Van Damme to be an enigma as a screen presence. He no longer is capable of the kind of stunt work and choreographed martial arts action scenes with which he made his name. Forced to rely more on his surprisingly decent acting range as he has moved into the age demographic of an AARP member, his films have run the gamut from terrible to occasionally fascinating in the second act of his career. Not quite as muscle-bound as he used to be, his face slightly marred by unnecessary nips and tucks as a younger man, and his aggressively confident (some might say arrogant) demeanor having given way to a more thoughtful—almost humbled—attitude, he has aged into an interesting character actor who still has enough drawing power to get starring roles in small action movies. But many of the action movies he has made (including several when he was in his prime) in his career are not that great, so it is a treat when he shows up in something as relatively interesting and well made as THE BOUNCER.

Lukas (Van Damme) is part of a security team at an exclusive nightclub in Brussels. He works all night, goes home every morning to make breakfast for his ten-year-old daughter Sarah (Alice Verset), and escorts her to school on the train. Lack of money is an issue, as is a shadowy past that has him only giving people his first name and registering Sarah in the school under an alias. When an accident at his club forces him to take a position as a bouncer with a strip club, he finds himself caught up between a shifty Interpol agent (Sami Bouajila) who wants him to gather intelligence on Jan (Sam Louwyck), the owner of the strip club who may also be running an operation counterfeiting Euros.

The plot is not the most original of scenarios, but director Julien Leclercq is far more interested in how Lukas is still shaken by the acts of violence that sent him into hiding and how that impacts the way he tries to handle his impossible situation. Aside from an early scene that finds him literally having to fight to get the job at the strip club, most of the film finds Lukas trying to handle conflicts either through negotiation or simply out-maneuvering those who would do him or Sarah harm.

Casting Van Damme in such a largely non-physical role is a masterstroke on Lclercq’s part. Not only is he up to the challenge of portraying such a beaten down character attempting to avoid violent conflict at all costs, his mere presence tips off the audience that Lukas will crack at some point, heightening the suspense of a film that largely takes its time to get where it’s going.

Despite long stretches of THE BOUNCER being light on action, Leclercq manages to keep the film visually interesting by cribbing a bit from THE WRESTLER of using long steadicam shots that follow Lukas, allowing the audience to fully take in the back rooms, long hallways, and basements that make up his limited world. This style culminates in a terrific sequence that runs nearly five minutes without a cut as the camera follows Lukas while he raids a farmhouse to kidnap a meth cooker for Jan. 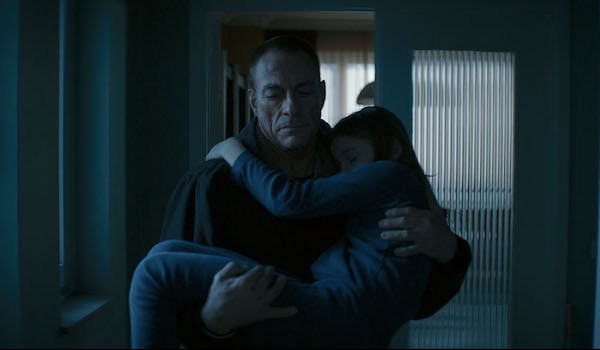 The original title of THE BOUNCER was LUKAS. While neither title is exactly eye-catching, the original at least spoke to the fact that the film is more of a character study with some violent moments as opposed to a pure Van Damme action flick. With its focus as a character study, the film will probably not be of that much interest to Van Damme’s fans who are only interested in watching him unleash roundhouse kicks to the head or do physics-defying splits. But for folks who were impressed by Van Damme’s nuanced performance in JCVD, THE BOUNCER offers up a similarly intriguing, gritty performance worth seeing.