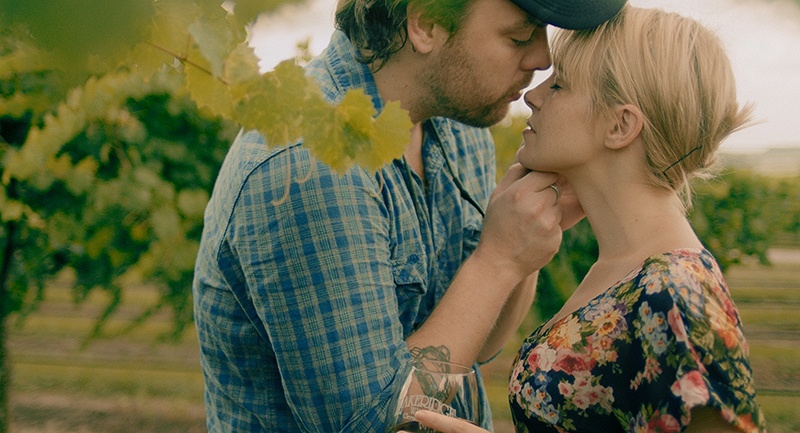 Jeremy Gardner’s THE BATTERY was a huge surprise when it hit the genre festival circuit back in 2013, a micro-budget zombie movie that upended virtually every expectation of what that description usually entails. Sure, there was a world of shambling undead corpses, but there was also unexpected heart and keenly observed characterizations in its portrayal of two sort-of friends stuck together trying to survive a zombie apocalypse without losing their minds. Gardner’s self-distributed follow-up TEX MONTANA WILL SURVIVE! (co-directed by Christian Stella) was another tightly focused micro-budget film, this time a straight comedy starring Gardner in a virtual one-man show. Gardner and Stella have been working at their latest feature for some time, and AFTER MIDNIGHT is another intimate and unique take on familiar genre territory that is well worth the wait.

Hank (Gardner) is having a rough time. His longtime girlfriend Abby (Brea Grant) has left him, and the same night she left a monstrous creature came out of the wilds that surround their isolated home. Hank’s been fighting it off every night since, with most of his spare time taken up by drinking and ruminating on their relationship. When Hank’s volatile behavior gets a little out of control, Abby’s brother Shane (Justin Benson), a local cop, convinces Hank to get out of the house and tend to the bar he and Abby run together. Hank convinces his pal Wade (Henry Zebrowski) that something supernatural is happening, but Wade is not much help as he’s mostly content to drink until the whole thing blows over. As Abby’s absence continues, the monster becomes more aggressive – but is it even real?

For most of its running time, AFTER MIDNIGHT runs on parallel tracks following Abby and Hank’s past and his current dilemma. Gardner brings the same sharp eye for character work he displayed in THE BATTERY‘s examination of an uneasy friendship to a romantic relationship, totally sold by excellent lead performances by himself and Brea Grant. Also excellent is the supporting cast, with Henry Zebrowski walking off with every scene he’s in as charming goofball Wade. There are great moments between all of the characters, but the film builds to a lengthy single take in the final act between Gardner and Grant that effortlessly runs an astonishing gamut of emotional terrain. It’s a knockout scene, a beautiful piece of work that shows off two great actors at their absolute best.

As much as THE BATTERY was a “zombie movie” with some unexpected comedic and dramatic twists, though, AFTER MIDNIGHT feels almost like an inversion: It’s a romantic comedy/drama that happens to include some “monster movie” stuff in it. That’s not really a complaint, although no doubt some genre fans will prefer the previous film’s balance of horror and dramatic elements. But Gardner is totally unafraid to steer AFTER MIDNIGHT (and himself) into some seriously vulnerable emotional immediacy that will stick with viewers long after the credits roll. It’s fantastic work all around, and it’s impossible not to be excited to see where Gardner and his collaborators go next.