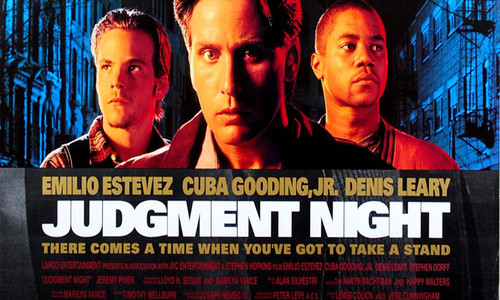 On this week’s BEYOND YACHT ROCK podcast, the guys who coined the term go “wild on the fives” with a deep dive into 1993’s JUDGMENT NIGHT soundtrack.

Each week, J.D. Ryznar, Hunter Stair, David B. Lyons, and Hollywood Steve Huey create an arbitrary genre of music, counting down ten primo examples such as Giallo Shots (horror movie themes) and Horror Rap-Ups (rap songs from horror films that recount the plot). However, every fifth episode the gang does a little something different and this week they are passing judgment on the JUDGMENT NIGHT soundtrack, which is notable as it featured eleven tunes that paired hip hop artists with alternative and metal acts and was always getting stolen from the Camelot music that I worked at as a teenager. The guys determine on each track who’s the real MVP: the rapper or the rocker.

The hosts don’t seem to enjoy the film JUDGMENT NIGHT as much as they do the soundtrack. The 1993 crime thriller features Emilio Estevez, Cuba Gooding Jr., Jeremy Piven, and Stephen Dorff as four suburban friends out for a night on the town when they run afoul of gang leader Denis Leary in the Chicago projects. JUDGMENT NIGHT is a fun piece of direct to video inspired trash (fittingly, it was released went straight to VHS in the U.K.) elevated by the well-known cast. It would make for a fun double feature with Walter Hill’s TRESPASS from the previous year or 1994’s SURVIVING THE GAME. 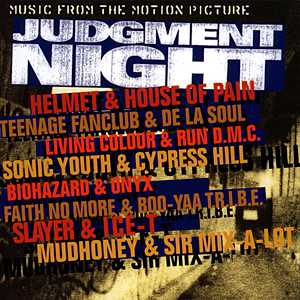 While the film performed relatively poorly at the box office recouping just $12,136,938 of it’s estimated $21,000,000 budget, the soundtrack remains a pop culture turning point to this day. Run D.M.C and Aerosmith are generally credited with bringing about the first collaboration of rap and rock with 1986’s “Walk This Way,” the JUDGMENT NIGHT soundtrack ushered in a the new era of rap rock and nü-metal (for better or worse) in the late ‘90s. Produced by Immortal records co-founder Happy Walters, the soundtrack’s legacy has far outlasted that of the film.

This week’s podcast is a supersized one at just under two-hours as the hosts debate each track, providing fun facts about the album and the artists, a little history about white flight and the time and place that the soundtrack was released, as well as sharing personal anecdotes about what the JUDGMENT NIGHT soundtrack meant to them as young music fans. The show opens with Ryznar using the McDLT as a metaphor for the rap rock revolution that is oddly brilliant. Per usual, the episode is funny as hell and will make you feel like you’re hanging out in a friend’s basement just shooting the shit about music that you dig. In general, the BEYOND YACHT ROCK podcast deftly blends everything I enjoy: pop music history, humor, and nostalgia, and this episode packs it all in.