During its runtime, FEAR STREET PART ONE: 1994 keeps swinging back and forth between great elements and distracting weaknesses. Director Leigh Janiak’s very loose adaptation of R.L. Stine’s work has delightful nods to the decade that not only revitalized slasher films but also had a large boom of YA horror titles, yet also gets caught up in weak nostalgia. There are expertly crafted scenes of terror, but also large chunks of inept storytelling. FEAR STREET PART ONE: 1994 is inconsistent, often feeling uncertain of the movie it wants to be. That imbalance mutes some of the excellent work by Janiak and company, but the combination of throwback and innovation still shines through enough to make for a fun horror film for a summer night. 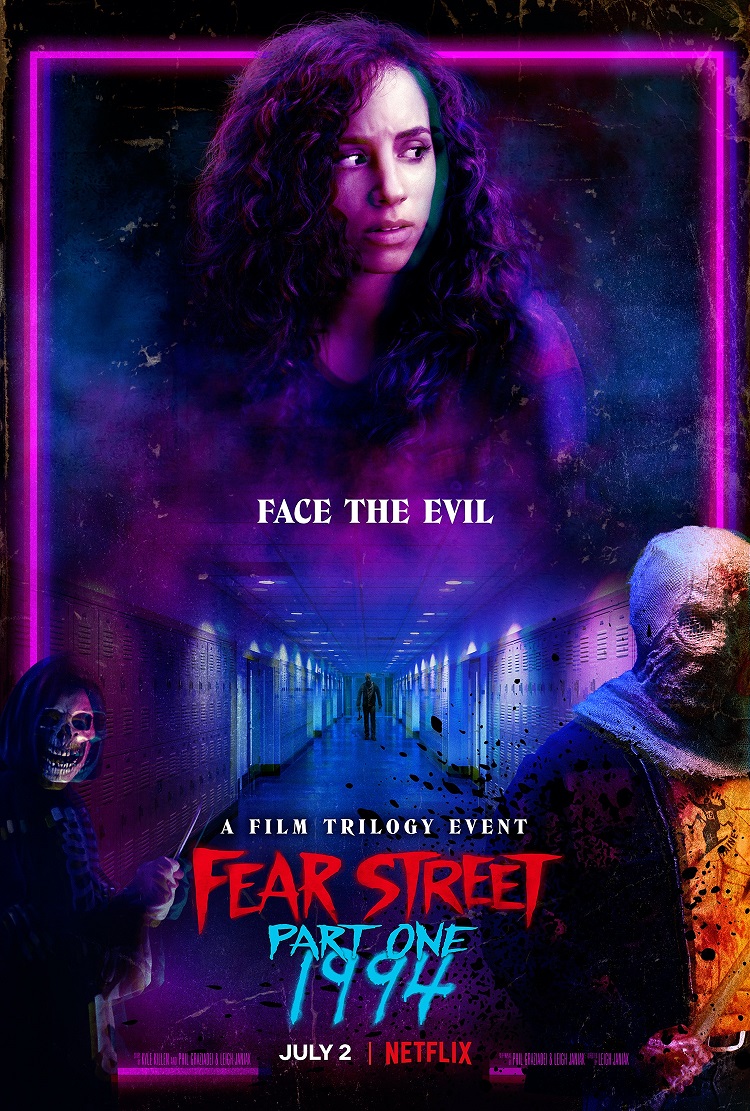 There are two neighboring, but wholly different, suburban towns: Shadyside and Sunnyvale. Sunnyvale is full of prosperous, beautiful families who have idyllic lives and do great things. Shadyside residents are usually under financial duress despite working long hours at jobs they hate, just to keep their houses in a town with a horrifically disproportionate amount of spree killings. Naturally, these municipalities are rivals — though it’s likely Sunnyvale wouldn’t consider Shadyside worthy of their rivalry. On top of Shadyside’s high schoolers reeling from the most recent mall massacre, Deena (Kiana Madeira) is especially downtrodden after her girlfriend Sam (Olivia Scott Welch) moved to Sunnyvale and broke Deena’s heart. At school, she finds little comfort in her overachieving friend Kate (Julia Rehwald) or drug addled buddy Simon (Fred Hechinger). While her brother Josh (Benjamin Flores Jr.) is too busy listening to heavy metal, playing video games, and/or chatting on AOL to barely even pay attention to her. After a prank between the towns goes awry, the group finds themselves pursued by a relentless killer. Josh has theories about its motives, culled from the Internet about the town’s history and curse, but the teens still need to figure out how to stop it as more murderous figures emerge.

Here’s a weird thing about FEAR STREET PART ONE: 1994: it’s basically the 2015 GOOSEBUMPS movie. That’s not entirely accurate, but there are a lot of odd similarities: Both R.L. Stine “adaptations” are very loosely based on the source materials but feature many references to multiple books within the series. They both concern different figures of different stories with different “abilities” coming into the real world to chase down a group of imperiled youths that must figure out a way to undo their original actions that set the whole debacle in motion.

The difference lies in the fact that FEAR STREET PART ONE: 1994 is more faithful to the core narrative of the Fear Street Saga books and is aimed at an older crowd with the profanity, sexuality, and body count to prove it. This may not be true of the following two installments, but 1994 expertly captures that move from juvenile horror literature to YA horror literature. Suddenly there’s drugs, people whacking it in a bathroom, face stabs, and the idea of dire consequences for actions undertaken by generations that came before. Director Janiak (who co-wrote the script with Phil Graziadei) impressively crystalized the essence found in the works of Stine, Christopher Pike, and Lois Clark Duncan where it’s certainly not for the young but truly only flirts with more “adult” themes to increase the drama, suspense, and stakes.

Janiak (who wrote and directed 2014’s chilling creepfest, HONEYMOON) sets up a bunch of fun slasher staples of stalking and sudden attacks, our heroes recoiling in terror and disgust at the bloodletting, all while scrambling to figure out some way to make the nightmare end. Unfortunately, this adherence to welcomed tropes also comes with a lot of the familiar annoyances. Orchestral stings when something is moving in the background, heavy telegraphing of information that will come into play at the climax, and an over reliance on plot contrivances are just a few of the usual suspects at work. It’s also hard to know if Janiak and company are trying to mirror (possibly mock?) ‘90s horror films like SCREAM and I KNOW WHAT YOU DID LAST SUMMER through the use of constant needle drops, certain camera angles and color palettes, and even one of the main antagonists who intentionally looks and moves like Ghostface. (Also Marco Beltrami’s score is nearly identical to his compositions for SCREAM, to the point where its brazen redundancy is borderline insulting) But then that embrace of ‘90s aesthetics is abandoned in favor of bi-lighting (what grocery store’s backroom is lit like the coolest new club in the West Village?); those needle drops go from being persistent (and jarring) to infrequent and barely used at all; and that villain receives less attention than other monsters at play who are more reminiscent of more recent horror staples.

It’s possible that folks recognized that endless homages and winks would wear thin and thus changed course, but it’s not done in a subtle enough manner to feel like FEAR STREET PART ONE: 1994 is doing it for any overt purpose. If these ‘90s visual and aural callbacks were there from the first scene (they are not) and then waned until they were gone completely, then it would be a clear conscious decision to have FEAR STREET PART ONE: 1994 break out of its nostalgic cocoon and emerge as something new. Instead, sometimes scenes have those tropes and sometimes they have more modern flare. That inconsistency also plagues the film’s tone. Slashers have always awkwardly fumbled between horror, comedy, and sexy times, and this one is no exception. Which is fine, except that certain jokes land in ways that don’t seem true to the characters. A lot of the kills aren’t that clever, until suddenly there’s a very inventive one but also incredibly brutal with no indication why that victim got it the worst of everyone. And the sexy times are handled well in this, but some of them require leaps of logic that again defy established characterization.

The cast helps FEAR STREET PART ONE: 1994 tremendously. Madeira has the thankless task of being the dauntless hero who also is a bit of a mopester given the broken heart but imbues her with a real sense of soul and humanity. Scott Welch compliments Madeira well in their troubled couple routine and carries the weight of the group’s horrific predicament on her shoulders. Rehwald is a true standout performance, but it helps that her character is an overachieving cheerleader valedictorian drug dealer babysitter who is rational but also ready to fight at a moment’s notice; a fairly unique type amongst film roles. Flores, Jr. and Hechinger serve well as second bananas that deliver exposition, jokes, and themselves as potential victims to the monsters. Thankfully this isn’t a group of Dead Teenagers that audiences can’t wait to see killed, but instead engaging characters that people will like and care about, granting actual stakes when some of them meet their end. 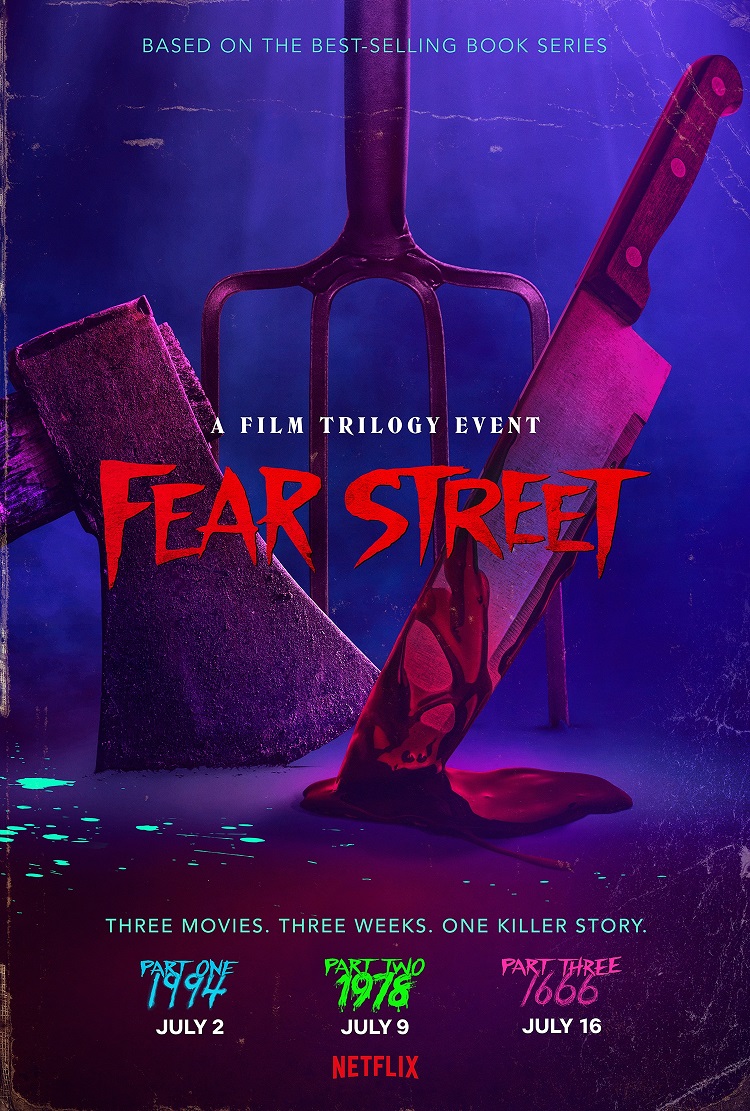 Janiak has made an entertaining throwback horror film that is a great bridge between scary younger fare and the more adult grisly stuff — just like Fear Street and its ilk did on the bookshelves in the ‘90s. It has lots of style and love for the genre, but that often leads to attempting to be too many things to too many audiences at once. Homage, send-up, reinvention, and more all get jumbled up which makes the whole film feel less cohesive. Even with those missteps, FEAR STREET PART ONE: 1994 is a fun trip back to familiar stomping grounds that is a perfect slice of a summer slasher. 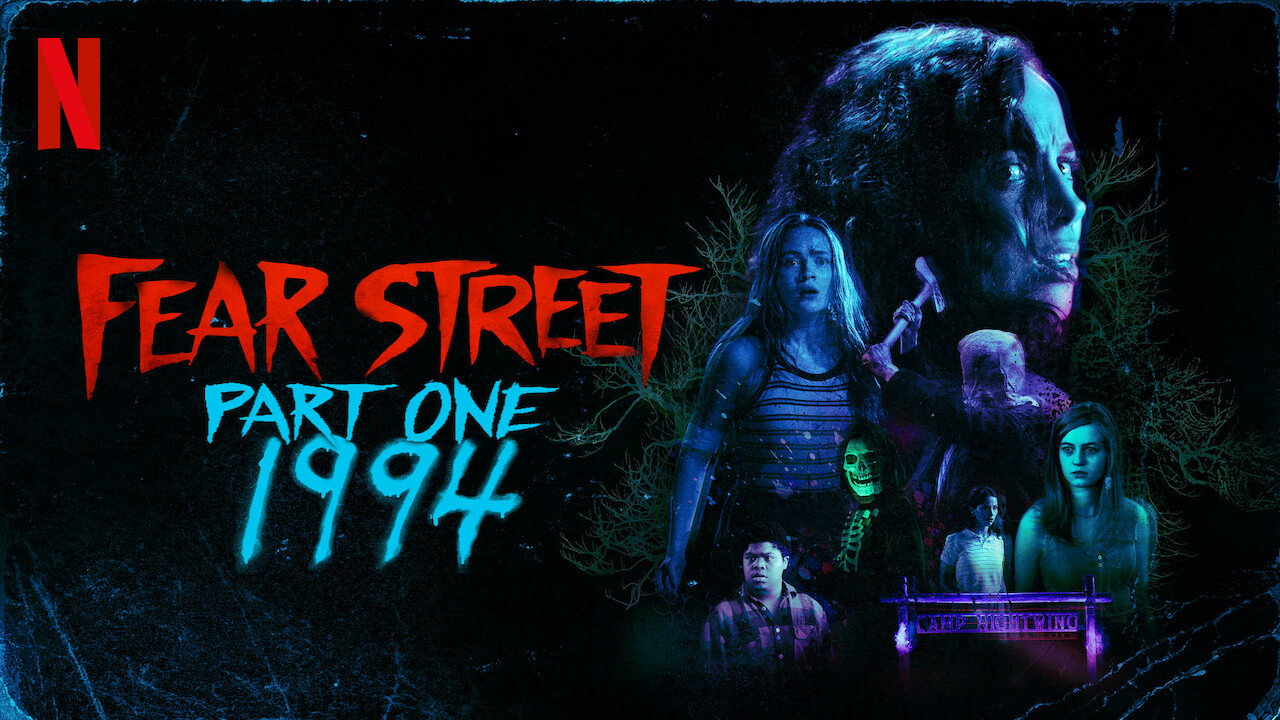