Years ago, George Romero attempted to mount a musical take on his beloved zombie genre called DIAMOND DEAD. Had the film, about an undead rock band, been made, it would have joined a tiny and rare, but altogether potent, field of horror-musicals, a hearty bit of niche programming that has provided cult favorites like LITTLE SHOP OF HORRORS, SWEENEY TODD, the fabled BUFFY THE VAMPIRE SLAYER episode “Once More With Feeling” and, of course, the granddaddy of them all, the legendary ROCKY HORROR PICTURE SHOW

That film, of course, never came to be, and, sadly never will. But that’s not to say  that we’ll never see the lifeless hordes break out in song. Indeed, someone has picked up where Romero never got to leave off, as Scottish director John McPhail has delivered the utterly delightful ANNA AND THE APOCALYPSE.

Be forewarned: ANNA owes way more to HIGH SCHOOL MUSICAL then rock operas like ROCKY HORROR or REPO! THE GENETIC OPERA. And I gotta admit, this reviewer had a bit of a sugar shock when the film started, as the GLEE-ful musical theater pop and Efrons-and-Hudgens tweenybopper drama isn’t exactly isn’t in my wheelhouse. But the bubblegum quickly becomes necrotic, and by the time the film hit a battle royale in a bowling alley, I couldn’t help but surrender to the film’s jolly charm.

oh, and a zombie outbreak is slowly roiling around the globe,ready to interrupt this little hamlet’s cheerful Christmas.

Toe-tapping tunes,ranging from moist-eyed ballads to strutting ROCKY style glam to Broadway pomp and sunshiny pop, and crimson-squirting gore flip-flop,and sometimes co-exist, in joyfully skewed harmony. At first, admittedly, the music and teen drama feels cloying and artificial –it has the bright, shiny appeal of a Disney Channel afternoon tv special. It’s not bad….just seemingly aimed at a younger audience, not one that is a dedicated horror crowd. But then one cheerful twirl through a graveyard is punctuated with a zombie in a snowman costume having it’s head popped off like a champagne cork, and all bets are off  as the film veers left into juicy Raimi-style bloodletting.

The story behind ANNA, is,sadly, one of tragedy. It was originally conceived by “Ryan Gosling Won’t Eat His Cereal” Vine creator Ryan McHenry, who made a short film titled ZOMBIE MUSICAL in 2011 before cancer took his life at the age of 27 in 2015. McPhail was hired to help finish bringing McHenry’s vision to life,and he’s done a bang up job honoring the man. McPhail brings a strong sense of style to the film, never overwhelming the film while allowing the impressive choreography room to breathe. For what must have been a fairly modestly budgeted production, McPhail gives the film the sheen of a major Hollywood musical, and he deftly balances the film’s tones, as the sickly sweetness and quirky gore moves into real pathos as you begin to realize that you actually have begun to care about these characters that you thought started off as stock caricatures.

It helps that McPhail has assembled a terrific cast that pulls you in.  Hunt is a real  find as Anna, her mix of charm, toughness and vulnerability immediately putting you in her side. Cummings is goofily endearing as the clumsy, good-hearted John ,and Swires brings sardonic edge to her millennial activist. Kaye goes scene-crunchingly over-the-top as the malevolent Savage, but it’s the right tone to strike. Indeed, the entire cast knows exactly at what level and speed to pitch their performances at for such a frothy red concoction. 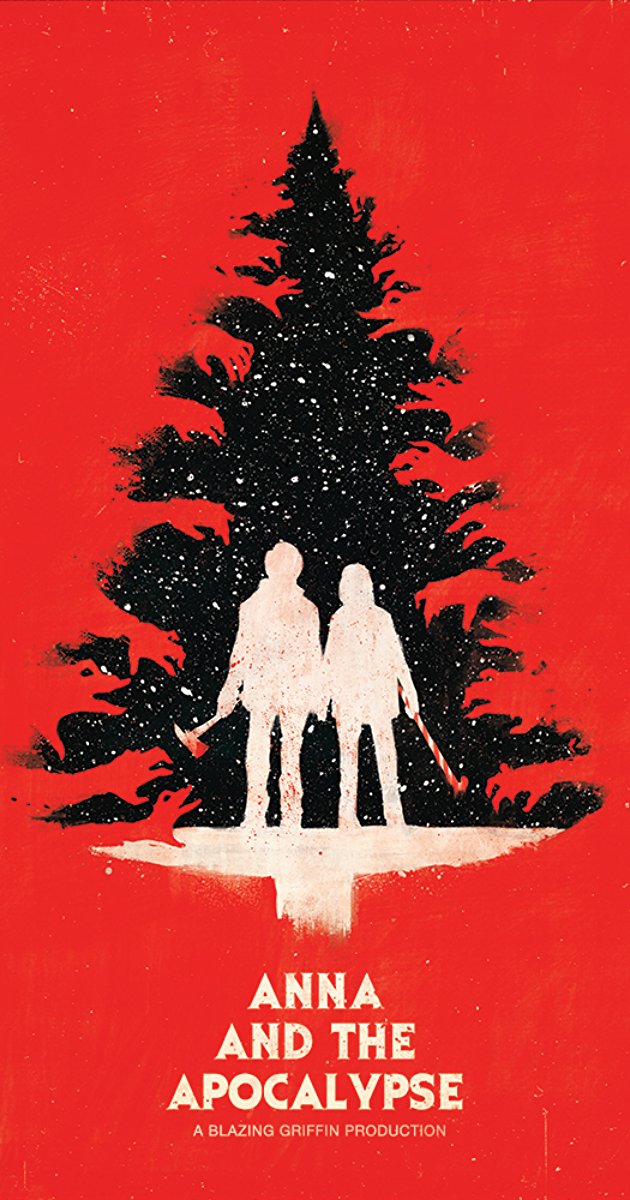 The biggest miracle of ANNA AND THE APOCALYPSE is just much sheer joy it brings.  It’s the kind of movie that breaks down any too-cool-for-school hipster pretenses and leaves you smiling from ear to ear by the time the credits roll. In fact, I guarantee that even if you do try and resist ANNA’s ample charms, you’ll still find yourself tapping your foot to at least one song. It is simply that irresistible.