The 1981 Jimmy Huston-directed, South Carolina-shot FINAL EXAM has an odd place in slasher film fandom – dismissed as a poorly-paced, explanation-free horror pic for years, the film has developed something of a more positive reputation in more recent times thanks to the DVD releases via Code Red. And it’s Code Red that brings the film back for another round, this time on Blu-ray via Scream Factory, pulling along all of the bonus features from the long out-of-print Shriek Show DVD as well.

FINAL EXAM’s reputation among slasher film fanatics is, to put it mildly, a bit of a mixed bag, and it’s easy to figure out why. The film stands out amongst a majority of the slasher films at the time, emphasizing characters over murders to such an extent that virtually all of the bloodshed is confined to the film’s final third, and even then, both the killer and his motivations are barely touched upon. FINAL EXAM doesn’t play so much like a horror film as it does a likeable fraternity drama that suddenly gets hijacked by a killing spree in the last half-hour. 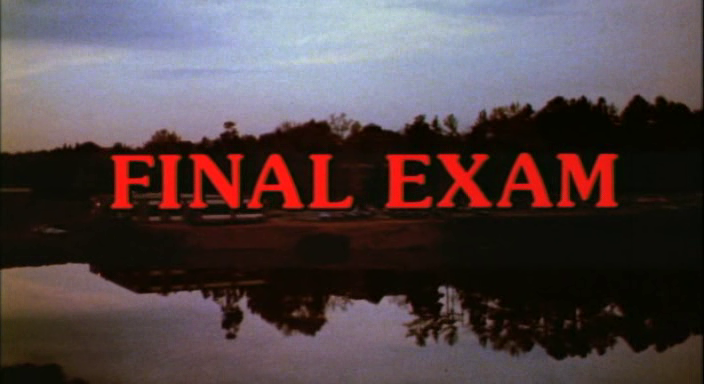 The film certainly starts on an audience-pleasing note, as a pair of college kids making out in a parked car get offed by a mysterious maniac. The action then moves to Lanier College during the week of finals, as various characters, aware of the murder but not too concerned about it, busily carry on with their lives of fun and frolic, studying or not studying, hazing or being hazed, and generally doing all of the things one expects in a movie about college kids.

Our lead actress Courtney (Cecile Bagdadi) just wants to study, and is bothered by the fact that her blonde roommate Lisa (DeAnna Robbins) gets away with everything, including sleeping with a professor, because of her looks. Courtney is also the object of the affections of Radish (Joel S. Rice), the school’s token nerd. The awkward Radish also finds himself on the receiving end of pranks put on by the local frat – including a staged school shooting (!) that results in Radish getting on the bad side of the local sheriff (Sam Kilman), who apparently just stepped out of a MACON COUNTY LINE sequel. 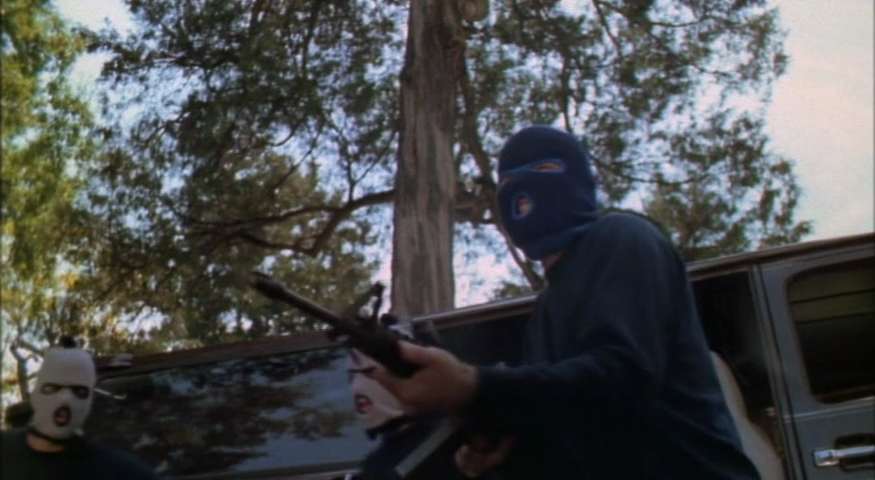 Within the frat, new pledge Gary (Terry W. Farren) is sent to steal the answers to the all-important final exam as part of his hazing, a ritual overlooked by goofy dim bulb Wildman (Ralph Brown). Gary’s not too sure about his relationship with his girlfriend Janet (Sherry Willis-Burch), but she pulls through in a pinch. It’s a diverse bunch of characters, ones we can tell apart easily – though the fact that a couple of them have their names on their football jerseys helps as well. But who will be the lucky ones to pass their final?

Wait, no. This is a slasher movie, so the question should be “Who will be lucky enough to survive until the closing credits.” The answer is “not many of ‘em,” as the final half hour gets the body count rising in a serious of well-directed but surprisingly not gory murders in which a large chunk of the cast is disposed of by a murderer whose identity and motivation are largely irrelevant. 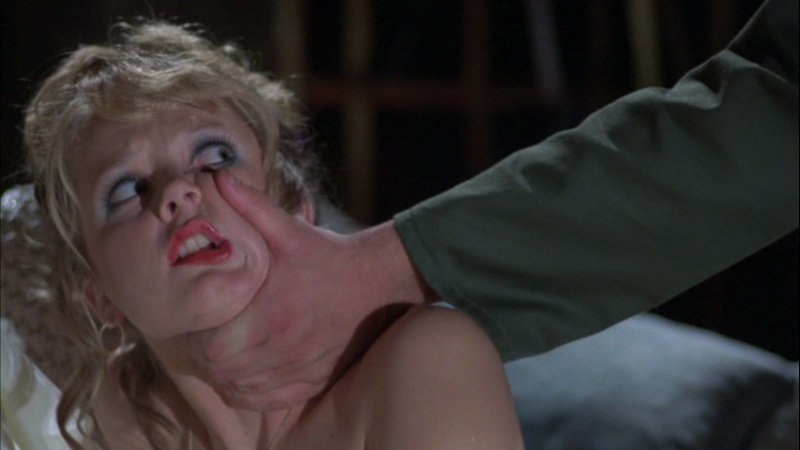 This all sounds like a poorly-structured cheat, and in the eyes of many that have written about the film, it certainly was one. But the truth is that Huston prepares you for the non-standard finale through Radish, a character that could have easily served as the prototype for Jaime Kennedy’s Randy in the SCREAM franchise, a connection alluded to in the special features. A fan of horror films and serial killers, Radish doesn’t seek an explanation for the opening murders, and figures that looking into motivation is pointless. The movie posters for the likes of THE CORPSE GRINDERS and TOOLBOX MURDERS that adorn his wall should signal that FINAL EXAM isn’t going to bother coming up with an explanation – it’s more of a subversive take on the genre than a straightforward addition to it, even skimping on the violence and nudity most of the films of its type wallowed in.

Some audiences have opined that Radish is actually a closeted gay character, but I don’t think that’s the case – he’s just an awkward nerd with a relatively high-pitched “gay voice,” whose affections for Courtney seem genuine. The bigger pink elephant in the room is the jock Wildman, who treats pledge Gary to a hearty embrace when he sees him, engulfing the smaller chap in his arms and licking at his ear. He later holds him as his frat mates strip him to his underwear and tie him to a tree, dousing the pledge with water that makes his briefs leave nothing to the imagination. Wildman then licks whipped cream off of the young man’s chest, an effect he tries to replicate later by downing cream straight from the can. Wildman, however, seems dissatisfied with this, as the non-dairy product’s flavor isn’t complete without the salty taste of his true desire’s flesh in the mix. He stares off into space, dully, attempting to understand the emotional roller coaster that’s causing the knots in his stomach. He thinks of Gary, his hand moving slowly down his muscle-bound chest, past the perfectly-sculpted abs with just a hint of blonde hair emerging from the waistline of his pants, and gently nudg— 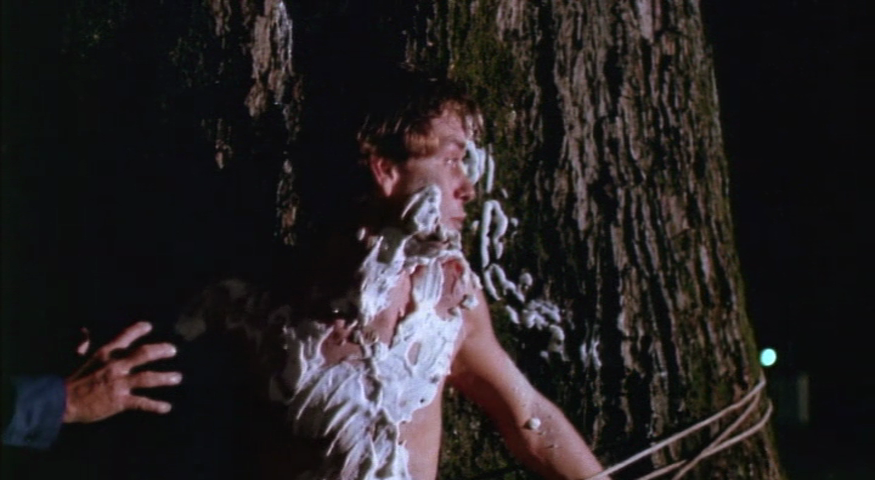 It’s true that FINAL EXAM isn’t a standard slasher film, and if you’re expecting one, I could see how the first half could drag. But while we don’t get actual murders, we get the hazing, a simulated school shooting, a seductive sexpot having an affair with a professor, a very identifiable “nerd” character and a group of people that manage to be unique individuals doing normal, everyday things – surely enough that would satisfy the average movie viewer.

Huston even makes up for the lack of slasher archetypes in the final third, with several well-shot stalking sequences that make great use of shadows and some impressive jump scares. It just takes a little patience to get there, something those who popped in the film looking for a typically fast-paced slaughter fest may have lacked. It’s unfortunate that some of the climax is bungled – it’s fine that the killer isn’t really introduced as a character, but he doesn’t have much in the way of a screen presence and the fact that he can catch up to a running victim by doing the stereotypical slow walk of a slasher movie antagonist doesn’t jibe with the meta nature. 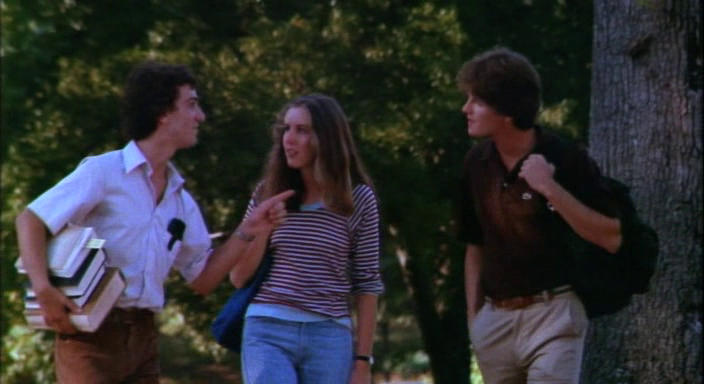 It’s a shame that Huston is missing from the special features, as his input in justifying the nontraditional nature of the film could have been valuable. Instead, we get a commentary track and individual interviews with cast members Rice, Bagdadi and Willis-Burch, who reminisce fondly about the making of the film, with Rice in particular enjoying the renewed interest in the film. Huston’s use of shadows looks spectacular on the Blu-ray transfer, and the new release should help with discounting the idea that Huston was just incompetent – his flair for certain shots shows a talent not as evident in the VHS release. (I can’t compare it to the previous DVD releases, though the “Katarina’s Nightmare Theater” release from 2011 lacks the commentary track.)

FINAL EXAM is enough off of the well-trod slasher film trail to warrant the attention of those who are worn out on the same old slasher film tropes, but at the same time, it’s bound to be a frustrating experience to those who are expecting those tropes to be in full force. It’s no wonder why its reputation is so scattered, but FINAL EXAM is certainly unique enough to be notable even if it doesn’t quite live up to the ambition it attempts. Scream Factory deserves credit for re-presenting Code Red’s title in a new format – EVILSPEAK is due out as well as part of the same agreement – and it would be great to see them re-release other titles from the label as well, as the limited production runs of earlier, under-the-radar releases made titles like PETS, THE CARRIER and PRIMAL RAGE difficult to come by.

Screenshots represent the DVD version and are not representational of the Blu-ray’s quality.